Missed out on a university, technical inst...
Next Story

Immediately after the court commenced at about 4:00pm on Tuesday, Isaac Ssemakadde attacked Kamasanyu for allegedly delaying court proceedings in the matter which he said makes Nyanzi a loser compared to other court users.

"Your worship, I invite you to take judicial notice that whenever this case is fixed for hearing at 9:00am, it is always heard at 4:00pm. When will Nyanzi have her day in court?" Ssemakadde submitted. 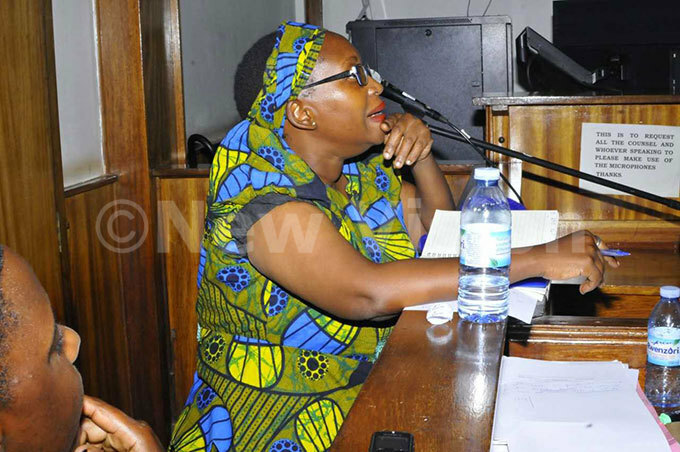 Nyanzi standing in the dock. (Photo by Wilfred Sanya)

"Whenever this matter is coming up for hearing, we make sacrifices including lunch. Why can't this court inform us that our matter will be heard in the afternoon instead of making us sit in the courtroom for whole day without trial?" he asked.

Also Nyanzi who was standing in the dock wondered why her case is heard last whenever it is fixed for hearing.

In reply, the magistrate said she has so many cases to handle apart from that of Nyanzi.

"Do not protest or attack court. I do not only handle Nyanzi's case," she said.

Hearing of the case again hit a snag after the state led by the resident state attorney Janat Kitimbo asked court for more time to ably reply to the defence objection to the tendering of the extracted Facebook post by Nyanzi.

In the last session, the defence lawyers objected to the tendering of alleged extracted Nyanzi's Facebook post in court on grounds that it was done contrary to the law.

According to the defence lawyers, the investigating officer had to secure a warrant from court before extracting the impugned Facebook post to avoid invading Nyanzi's privacy enshrined under the Constitution.

Ssemakadde implored the magistrate not to entertain ‘lazy' state attorneys in court.

"This case was adjourned  for the state to reply to our objection. My client has been on remand for so long yet she is entitled to a speedy trial" he said.

Nyanzi has been on remand since November last year. 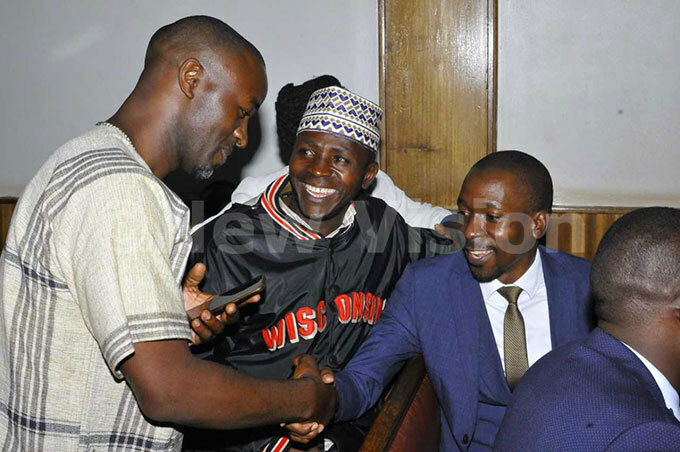 Nyanzi's lawyer (in blue jacket) says their case is always being delayed. (Photo by Wilfred Sanya)

Bill Ndyamuhaki, 33, said he searched for Nyanzi Facebook page on the instructions on Grace Akullo, the director of the Criminal Investigations Division on September 17, 2018.

"I came across several other similar pages in the names of Stella Nyanzi but I established that the offensive communication was on one page which I zeroed on," Ndyamuhaki said.

Adding, "When I read through Nyanzi's post, I noted that some content were obscene, vulgar and I cannot reconstruct the sentences in court because they are obscene," the witness stated.

She has been on remand since November last year after she opted not to apply for bail.

Ndyamuhaki also a cyber-crime investigator attached to the Police Crime Investigation Division (CID) told court that the indecent post was allegedly made by Nyanzi on September 16, 2018 at about 4:08pm.

"I was instructed to investigate this case by the Director of Director Criminal Investigations, Grace Akullo over alleged cyber harassment and offensive communication by Nyanzi against President Yoweri Museveni and his mother late Esteeri Kokundeka," Ndyamuhaki said.

Prosecution alleges that on September 16, 2018, Nyanzi posted on her Facebook wall indecent words against the president and his late mother.

According to the prosecution, the said posts were intended to disturb their peace, quiet and right to privacy.

In regard to Cyber Harassment, a person who willfully, maliciously and repeatedly uses electronic communication to harass another person and makes a threat with the intent to place that person in reasonable fear for his or her safety or to a member of that person's immediate family commits the crime of cyber stalking and is liable to a fine or imprisonment term not exceeding five years or both.