Justice minister Kahinda Otafiire was tasked by the committee to explain why government had not followed up on the recommendation to scrap the exams. Photo by Maria Wamala

The secretary of the Law Council, Margaret Apinyi earlier Tuesday stared down lawmakers calling for the immediate suspension of the controversial pre-entry exams to the Law Development Center (LDC) saying the exams will go as planned because "it's a command of the law."

Following a recommendation last year by the legal and parliamentary affairs committee that pre-entry to LDC be scrapped, a number of lawmakers have knelt hard on the Executive to have the policy shift implemented before the next impugned exams.

The exams in question are conducted by Law Council and are a prerequisite for lawyers seeking to join LDC to pursue a postgraduate diploma in legal practice.

"With all due respect, that is the law and there will be pre-entry unless the Advocates Act is amended," Apinyi said when asked by Abbas Agaba (Kitagwenda County) on the issue.

Earlier, Agaba had tasked the minister of justice and constitutional affairs to explain when the recommendation by Parliament would be put in place.

"I am told that there is a cabal profiteering from these exams through charging exorbitant sums to coach students. This exploitation has to end," Agaba said.

Otafiire who last year told the House that the Government is amenable to having LDC pre-entry scrapped, said discussions between stakeholders are ongoing to have the law amended.

The problem is that MPs on the legal committee want the exams stayed without amending the Advocates Act which Apinyi said is a nonstarter. 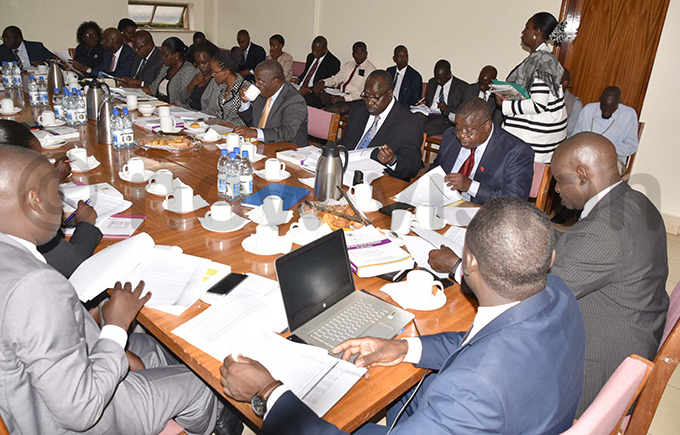 The issue of scrapping LDC pre-entry has since spawned a heated debate with a section of practising advocates warning that it will grossly compromise the quality of advocates in the long run.

From the interaction, it was evident that the Law Council and ULS were opposed to the scrapping of pre-entry exams.

ULS's president Simon Kinobe mooted the idea of Uganda adopting the UK system that provides for barristers and solicitors in order to provide employment for lawyers that fail in their quest to become advocates of the High Court.

However, Otafiire was of the view that pre-entry is locking out thousands of lawyers from LDC and spawning frustration and bitterness in the process.

If someone has been awarded a law degree by a university accredited by NCHE, Otafiire reasoned, what then is the rationale of subjecting him/her to another exam to access training at LDC for the bar course.

Besides, Otafiire reasoned, LDC is set to open regional centres in Lira, Gulu after opening another in Mbarara.

Opening the LDC gates ajar and letting the stringent standards at the centre to sort out the wheat from the chaff, Otaffire said, is better than frustrating qualified lawyers.

Schools wonâ€™t charge fees for USE