This was after the second leg of the Uganda Open tour at the course that has been restored only recently.

Mbale Golf Club's Paul Okiring chips from a bunker during the Uganda Open Tour at the Mbale course on April 6, 2019. PHOTO: Michael Nsubuga

This was after the second leg of the Uganda Open tour at the course that has been restored only recently.

Uganda Golf Union president Innocent Kihika has challenged the Mbale Golf Club membership to grow their numbers if they are to remain relevant and competitive.
This was after the second leg of the Uganda Open tour at the course that has been restored only recently.
"You need to start promoting golf in Mbale and we are challenging you to recruit 50 new members and that is the target we have set for you. It is through membership that you can develop the course," Kihika said.
On the course, West Nile Golf Club golfers Geoffrey Van Etoma and Patricia Nakuya returned 64 and 67 nett respectively to win their respective categories, as the Castle Lite Uganda Open tour made its second stop at the Mbale Sports Club course on Saturday.
As other golfers struggled to master the rough, sand-layered greens in hot, humid and dry condition, both golfers were treading on familiar ground as the conditions matched what they go through daily at home in Arua.
"Currently the morale is high in Arua. We practice every day; a day off the course is like missing an important part of your life. So the kind of practice we do gives us the strength to move forward," Etoma who plays off handicap 24 said. 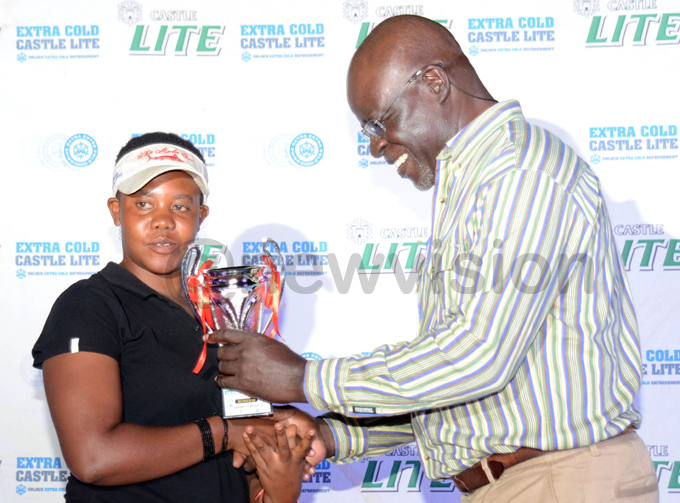 "All my tee shots landed on the fairway and my putting was good and the conditions are similar to those at home, so I didn't have any trouble," Etoma who bagged his third career win and first overall position stated.
Having been her second visit to the Mbale course, Nakuya was also playing on familiar ground.
"I had some knowledge of the course but I also played with experienced players, so I tried to play like them and this gives me more confidence that I can win more accolades," Nakuya said.
It was the same experience for the other Arua golfers; Hussein Alemiga, Yorke Alioni, Aidha Khamis who topped the men Groups A and C as well as the Ladies Group A respectively.
Nakuya was also Group B winner while Wendy Angudeyo finished third in Group A.
West Nile consequently won the round-2 club competition trophy too; in the series with 53 points while Tororo and Mbarara clubs finished second and third on 22 and 12 points respectively.  Entebbe and Palm Valley tied on 11 points apiece, as the Uganda Golf Club, Jinja and  Soroti picked 3 points each in the tournament that attracted 69 golfers from 12 clubs.
The third leg of the tour will be played at Tooro Club on April 27.
Castle Lite Uganda Open Tour Mbale
Overall winners
Men: Geoffrey Van Etoma 64nett
Ladies: Patricia Nakuya 67
Group A-Men
Hussein Alemiga 71c/b
Francis Ssuuna 71c/b
Jerome Egola 71
Group B
Geoffrey Gyabi 68
Asharaf Ssekajja 69
Samson Agamire 71c/b
Group C
Yorke Alioni 66
Peter Wakholi 72
Raymond Ekudu 73
Ladies Group A
Aidha Khamis 70
Bridget Basiima 71
Wendy Angudeyo 77
Group B
Patricia Nakuya 67
Lilian Koowe 69
Zawadi Safari 81
Club Ranking-Mbale tour
West Nile 53pts
Tororo 22
Mbarara 12
Entebbe 11
Palm Valley 11
Tooro 7
Uganda Golf Club 3
Jinja 3
Soroti 3