Art in Me Festival 2019
Next Story

President Museveni is shown the products being made at the barracks. PPU Photo

President Yoweri Museveni has commended officers of the Uganda People's Defence Forces (UPDF) Masaka-based Armoured Brigade for their initiative that has led to the manufacturing of de-ionised water and liquid soap that will be used for cleaning their military hardware.

"I am very glad that you people have started making de-ionised water and liquid soap. This is very good but you should beef up your team with chemists as the items you are handling are explosive," he counselled.

The President and Commander-in-Chief of the armed forces, was on Sunday visiting the Armoured Brigade headquarters in Masaka district where he interfaced with senior army officers and soldiers in Kasijjagirwa village and also commissioned a new facility at the barracks - Kaguta Officers Mess - on top of planting a tree and visiting the stall where the products of the brigade were displayed.

He was received by the commanding officer for the Armour Maintenance Unit, Maj. Charles Lubega.

Lubega explained that they are at small-scale production of the de-ionised water for battery topping and liquid soap that will be used for cleaning their equipment. He added that they plan to increase their production and supply their sister units with the products. He noted that this will cut costs by half when purchasing the same items from the open market.

Museveni explained to senior officers of the Armored Brigade the genesis of the armies from the time of traditional chiefs and the colonialists to the post-colonial times adding that all armies had a mission. President Museveni inspects a guard of honour during the event. PPU Photo

He said the liberation army of today has a specific mission of solving the needs of the people as opposed to the former forces that were serving the interest of chiefs and colonialists and whose characteristics were sectarian, anti-people, coupled with tribal arrogance and ignorance on science and were unwilling to learn.

He explained that the needs of the people are peace, education, roads, electricity, health, wealth and job creation along with markets for their products. He noted that some of the needs, such as peace in the country, have been fully addressed and others are being worked on.

He, however, pointed out that most of the needs are money consuming, necessitating their provision to the level of wealth creation so as to ensure food and financial security as well as prosperity for the people.

Museveni reminded the officers of the principles of the Liberation Army that include patriotism, Pan-Africanism, modernisation through education and trade as well as democracy.

Later, the President assured a joint meeting of officers and junior army personnel of facilities like primary and secondary schools in the sector of education for their biological children. He informed them that the High Command of the UPDF will also look into establishing a university for children of soldiers "but will only offer science-oriented courses that are marketable".

On the issue of health, Museveni cautioned soldiers to take good care of their health on an individual basis. 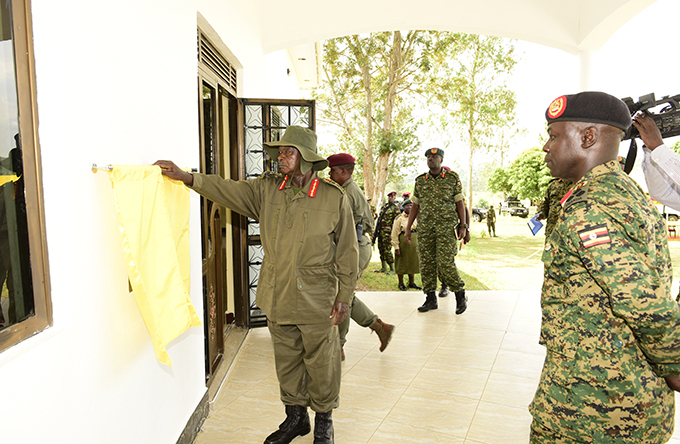 "Avoid promiscuity, alcohol and smoking. Ensure that you take part in physical exercise and shun laziness. If you take good care of your health, you can do a lot of things in your lifetime. So, please health starts with you," he advised.

The UPDF's chief of medical services, Maj. Gen. Dr Ambrose Musinguzi, said they are emphasising primary health care in the forces especially on sanitation and personal hygiene; fumigation and the use of insecticide-treated mosquito nets to combat malaria.

He added that health facilities in the barracks will also be upgraded and the exercise of immunisation against Hepatitis B has already started and will be rolled out to all army divisions in the country.

On the concern by soldiers about their personal land and property in their districts of origin being insecure from grabbers, Museveni assured them that lawyers will be attached to each brigade to help soldiers handle such cases at no cost. He added that a surveyor will also be attached to each division to offer free services in matters of individual soldiers' land surveying.

The President announced his support of sh100m to the SACCO of soldiers' spouses of the Armored Brigade headquarters in Masaka.

Mexican presidential race to kick off with nominations