Abducted tourist, driver rescued: 'We can ...
Next Story

Amazing facts about the hippopotamus

Hippos spend most of their time in water. (Photo by Titus Kakembo)

Hippopotamuses cause more human deaths in Queen Elizabeth National Park than: lions, leopards, crocodiles, or any other animal in Uganda.

And yet to communities found in most national parks where it is found, it remains underrated in terms of its fearless and potentially bad-tempered nature.

According to a tour guide in Queen Elizabeth National, Park Robert Adaruku  its large body is kept in the water and need not much energy to survive.

"An adult consumes between 15-40 kg of grass in a night," explains Adaruku. "They can remain submerged for up to six minutes because they can close their nostrils and ears to prevent water from entering."

Likewise, a two-month-old hippo can automatically hold its breath for only about 40 seconds. 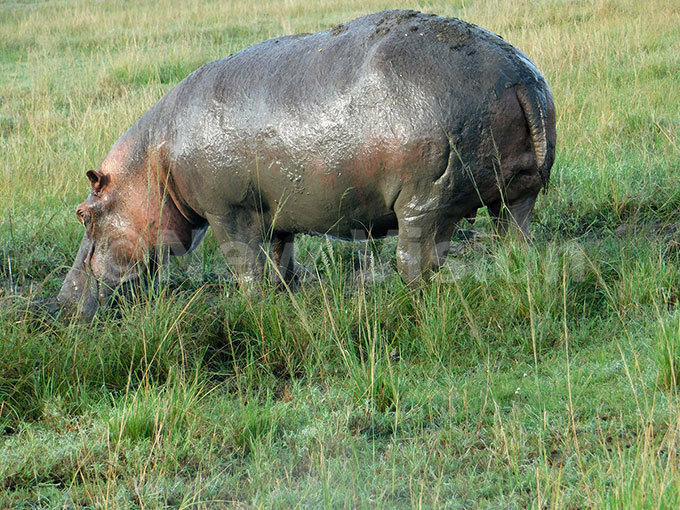 "Hippos are very adaptable in water. For example they walk on the bottom of rivers but are clumsy on land," says Adaruku. "They are able to float by breathing out before submerging which allows them to walk underwater."

Adding that, they push themselves off the bottom with and saunter into ballet kind of gallop through the water. Like nature would have it, as they move, they create pathways in the underwater vegetation which is useful and necessary to keep waterways flowing.

"I have seen these clumsy hippo navigate over obstacles and attaining up to 36 km/hour when need be!" asserts Adaruku. "They save energy by staying in the water.

Their most important requirement is a permanent water source. It must have a depth of 1.5 meters or more."

According to National Geographic hippos have a unique skin which is prone to dehydration, the more reason they spend the hottest hours of the day submerged in water or risk being overheated.

"I have seen female hippos spit on exposed calves to protect them from sun rays," recounts Adaruku. "But during cooler times they bask in the sun to warm their bodies up." 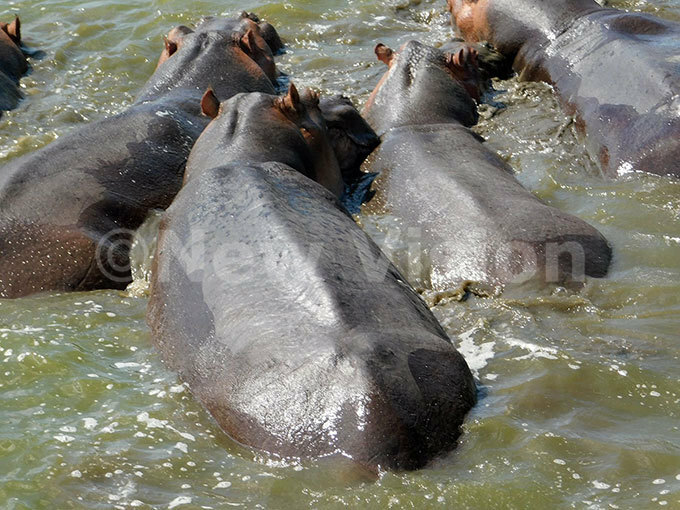 A group of hippos cooling off. (Photo by Titus Kakembo)

Uganda Wildlife Authority (UWA) spokesperson, Gessa Simplicious points out that hippos have a harem where bulls occupy well-defended territories that contain nursery herds of females and their young.

"These groups range from two to 200 animals but typically contain 6-15. Besides that, the bulls are obese and do not tolerate other males if found they risk a bite from their sharp teeth," says Gessa.

"Dominant bulls display their status through wide-mouth yawns that showcase their huge teeth and audible grunting throughout the night."

"They also suckle underwater by folding their ears and closing their nostrils so that they don't drown when submerged," explains Gessa.

"These adaptions make the hippo quite unique and fascinating to observe. For example their lower teeth change into miniature tusks that grow continuously to between 30cm -50cm long. They are instruments of defence."

Bobby should field the right players

Cranesâ€™ team to be changed, Owino out

Cranesâ€™ team to be changed, Owino out