Mugalike health centre II in Kagadi district was destroyed by the hailstorm. Photos by Ismael Kasooha

KAGADI - Drugs and property worth millions of shillings have been destroyed after a hailstorm hit several areas of Kagadi district.

Mary Nyamahunge, the security guard and cleaner at Mugalike health centre II in Kyenzige sub-county told the New Vision that at around 5:30pm on Saturday while she was cleaning, a strong hailstorm struck and blew off the roof of the health center leaving all drugs and other property exposed.

She added that she was with her two children inside the health centre but when the winds and rain became strong, they sought for refugee on the veranda but no sooner had they gotten out than the roof was blown off.

"When we noticed that the winds were very strong and moving pillars inside the house, we decided to go outside on the veranda and we saw the roof being blown off," said Nyamahunge.

She said that she called the in charge of the facility and informed her about the incident when the rains had subsided.

Jackline Mercy, one of the health workers at the Mugalike health centre II said that most drugs have been destroyed by the hailstorm and all the records have been badly affected.

"We are puzzled, all work has been paralyzed because we have no shelter where to operate from," said Mercy.

Olowo noted that the structure that has been housing the facility was weak and termites had infested it weakening it further.

He said that the district engineer has been notified to go to the facility and assess whether the building can be roofed again or not.

"We have communicated to the district engineer to assess the strength of the building and advise us on the next step of action," Olowo said.

He, however, noted that in the meantime the drugs that were not destroyed will be taken to Kagadi hospital as they find ways of addressing the challenge.

Fred Rukunyu, the health centre management committee chairman said that they are waiting for the district leadership to advise them on what they should do. 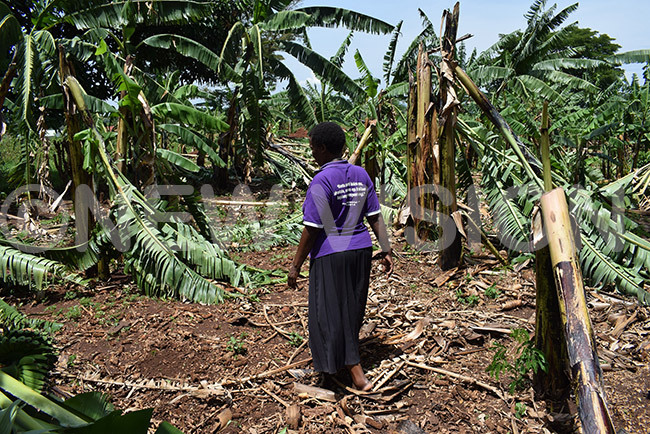 Rukunyu said that the facility was constructed in 1971 during Obote I regime and it's made of soil bricks which were not baked at all.

He added that they are worried that when this building is roofed again, it will put the lives of the health workers and patients at risk because it's already weak.

Rukunyu is appealing to government and non-governmental organisations to come to their rescue because they are stranded.

Meanwhile, farmers are counting losses after crops were destroyed by the hailstorm.

Valeria Kabonesa, a Catholic catechist at Mugalike parish said that the hailstorm left them pondering the next step of action after all their banana plantations and buildings were destroyed.

She said they have lost millions of shillings due to the destruction caused by the hailstorm.

"Our banana plantations, mangoes, and avocados plantations have been destroyed and we are worried that hunger might strike anytime," Kabonesa said.