On Saturday afternoon, eight armed men grabbed Badman School Fees and drove him off in a private car

A screegrab of a video shows Badman School Fees (in black shirt and red shoes) being led away by the unknown men.

On Saturday afternoon, eight armed men grabbed Badman School Fees and drove him off in a private car

According to Owoyesigire, a complaint of defamation against the musician was reported at Katwe Police Station recently by fellow local artist, Gereson Wabuyi, better known by his stage name Gravity Omutujju, prompting his arrest.

He, however, declined to comment on the manner in which the musician was taken into custody by the armed men. 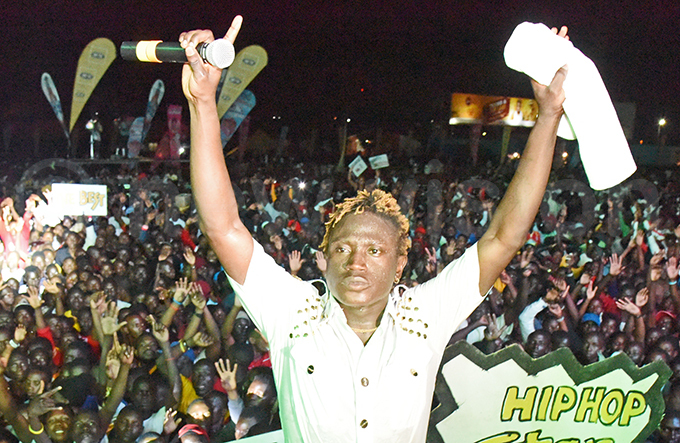 "I was not there during the arrest but if the arrest involved uncouth behaviour, the artiste should file a separate case and it will be investigated accordingly," Owoyesigire told New Vision in a telephone interview on Sunday.

On Saturday afternoon, eight armed men grabbed Badman School Fees and whisked him away. It later emerged that he was taken to Katwe Police Station in Makindye division.

He was picked from outside Vision Group premises while being interviewed by a crew from Bukedde TV.

During the Interview, Badman School Fees alleged that Gravity Omutujju stole lyrics of his song Balance The Boat and consequently released the song as his own. The song has been receiving plenty of airplay across the country.

There have been accusations and counter-accusations amongst the two musicians feuding over the song in recent weeks. Each artist has given separate interviews in both print and television local media claiming ownership.