US Anglican Bishop warns against early mar...
Next Story

KAGADI & KAKUMIRO - The government of Uganda has allocated close to sh2bn for the upgrade of four health center IIs to health center III in the districts of Kagadi and Kakumiro.

Malik Mahabba, the Kagadi Chief Administrative Officer during the signing of the contract with Tradint Engineering limited and Kagadi district local government at the district headquarters in Kagadi town said that these health Centers when upgraded will reduce the pressure on Kagadi hospital.

"We are optimistic that these facilities will go ahead to offer services to the people in these areas instead of moving long journeys to Kagadi hospital." said Mahabba.

Muhorro and Kyabasara heath center II will cost sh947, 548,636 from the ministry of Health. 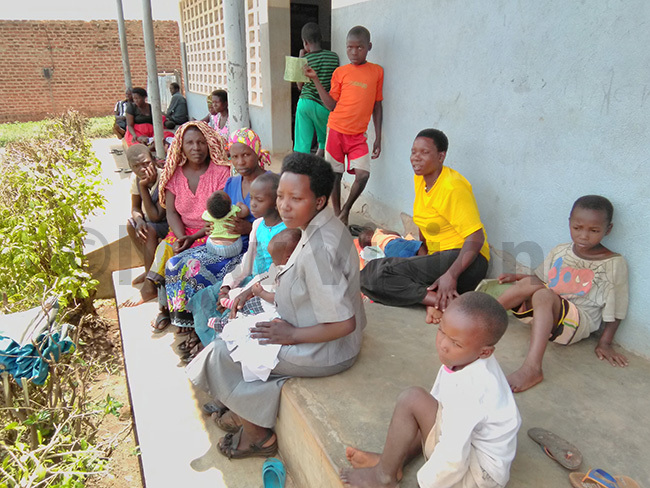 Patients seated on the veranda of Birembo Health Center II that will be upgraded to health center III. (Photo by Ismael Kasooha)

Mahabba said that this work is expected to be complete within 3 months in order for the district officials to account for the money received during this 2018/2019 financial year since funds from the government do not cross to another financial year.

Lillian Ruteraho, the Kagadi Resident District Commissioner thanked the NRM government for upgrading two health centers to the level of health Centre IIIs to address some of the challenges in health service delivery.

"Health service delivery has been a serious challenge in some areas and with this intervention we are optimistic that services will definitely improve." said Ruteraho.

Ruteraho cautioned the contractors against shoddy work warning that they will not be paid if they don't deliver as expected.

"We want value for money and government shall not pay you if you do shoddy works on these health centers." said Ruteraho.

Stephen Byaruhanga Mfashingabo the Kagadi District LCV chairman said that the district is committed to supervise the construction work in order to have quality work done and ensure proper accountability of the funds from the ministry.

"As a district we shall ensure that we do strict monitoring of the construction work to have value for money." said Mfashingabo.

Meanwhile, residents expressed gratitude to the government for upgrading their health centers and pledged total support to president Museveni and NRM government.

Godfrey Nangonza the Muhorro town council LC III chairman said that for many years Muhorro has operated a health center II yet the population is over 30,000 people.

Nangonza said that most people have been spending money in private health facilities because of lack of a government health center in the area.

"The people have for many years been going to private health facilities paying a lot of money because we haven't had a government facility at health center III level. We are sure that services will improve after the elevation of the facility," said Nangonza.

The ground breaking function for Kagadi district was presided over by the Resident District Commissioner Lillian Ruteraho on both sites in Muhorro Town Council and Kyabasara in Paacwa sub-county.

Meanwhile a total sum of sh974m has been earmarked to upgrade Birembo and Masaka health center IIs in Birembo town council and Katikara sub-county to health center III respectively.

Presiding over the ground breaking the Kakumiro Resident District Commissioner, Apollo Mugume, said that government is committed to deliver on all the promises made during the 2016 election campaigns to serve the people well.

Mugume urged the contactors to recruit local people to do the casual work during the construction of the health structures adding that government is rendering more services to improve livelihood of people in their respective communities.

Speaking at the same function the District Health Officer of Kakumiro Dr. Robert Senteza said the purpose of upgrading health facilities is to improve health service delivery to people in the communities.

In a related development the LCV chairman of Kakumiro Joseph Sentayi urged the local people to cooperate with the contractor to ensure quality work.

9% of blood collected is destroyed

Protect people living with HIV from Hepatitis B