District environmentalists and a section of youth planting a pillar at Owee stream during its demarcation. (Photo by Arnest Tumwesige).

AMURU - The Ministry of Water and Environment in partnership with Amuru district local government has embarked on the demarcation of a 20km stretch of Owee stream that starts in Amuru town council and joins Ayago River and Amuru hot springs.

Doreen Ajok Lanyero the acting Amuru district natural resources officer said most of the wells in the district are steadily drying up due to human activities but once such an exercise is in place, the people who engage in such activities are expected to leave and pave way for the rejuvenation of the area.

Lanyero applauded the Ministry for the support, adding that the district alone couldn't carry out the exercise.

With over 30 wetlands so far demarcated in West Nile, Lango, Acholi and Teso sub-regions, Afai said there's always a challenge of land owners thinking that their land is being grabbed by the government which is not the case. 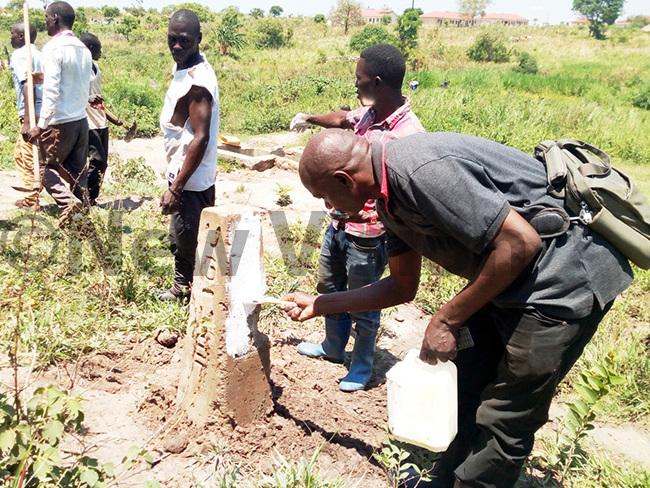 Afai illustrating to the youth how to paint a pillar in Amuru during the demarcation of Owee stream. (Photo by Arnest Tumwesige).

He clarified that after the planting of pillars, people along the wetland will form committees that will come up with the kind of projects that can be established in the buffer area.

"We engage the community so that they can utilize the wetlands sustainably and these projects can include fish farming, apiary and micro-irrigation," Afai told New Vision.

Since the exercise started in 2013/2014 in the entire region, over 20 projects have been generated with majority of the community preferring micro-irrigation where water is pumped from wetlands to their gardens.

The officer asked the district to remain supportive to this cause adding that it's the mandate of the local governments to protect wetlands as enshrined in the Local Government Act.

Meanwhile, Michael Lakony, the district chairman said while the wetland might be secured there's also need to protect the catchment areas noting that there's a lot of destruction going on in the environment department.

Lakony asked the Ministry to extend similar support to other streams like Omer, Olwal, Ayugi, Unyama, Aswa and River Nile such that they are conserved not just for the present but the future generation.

He commended government for the enormous support to the district in terms of the water sector where multibillion irrigation schemes in Bana and Pawel areas are already taking place.

"With this now in place, our focus now is to enforce anything against environmental degradation in the district." Obwona HM Acholi the Assistant Principal Secretary promised.

Can you tell them apart?

Mpande and Achen have telepathy