Uganda Open Tour starts with a bang as Koo...
Next Story

Chen was addressing participants after the annual “Run for improvement of Universal Primary Education Schools” run at Botanical Gardens.

Some of the runners that took part in the Entebbe Marathon. PHOTOS: Michael Nsubuga

Chen was addressing participants after the annual “Run for improvement of Universal Primary Education Schools” run at Botanical Gardens.

The third edition of the Entebbe SINOCHAM marathon successfully ended on Saturday with Chinese Embassy Councilor Chen Huixin who represented the Chinese Ambassador to Uganda calling on Ugandans to improve their social and skills development.
Chen was addressing participants after the annual "Run for improvement of Universal Primary Education Schools" run at Botanical Gardens.
"I think the Entebbe Marathon is a very good event. In future, the Chinese Embassy in Uganda will continue to support this event because it is important to note that the Entebbe Marathon feeds into the Wuhan International Marathon. We have sent previous champions to the competition and we believe this will continue,"
"It is also important to note that Entebbe and Wuhan are sister cities that have a number of cooperation and exchanges between the two cities are vivid," Chen stated.
On behalf of the embassy, he congratulated Entebbe upon the successful organisation and completion of the event and said the Chinese had participated because of the friendship with the people of Uganda. 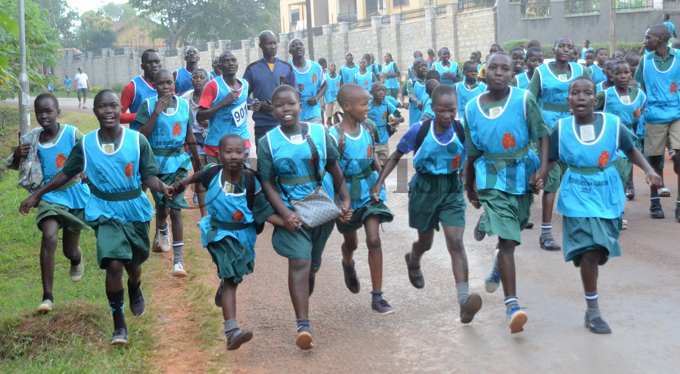 Some of the children who took part in the Entebbe Marathon

"You should aim to do better and Ugandans are not only good runners but should be good in skills development, social development and China will stand with you in social economic development just like we have done with projects like the Isimba Hydro Power projects, the Entebbe Express Higway and Karuma," Chen stated. "If you're able to walk, run, fly we shall be able to help you,"
The Chinese Community and business entities in Uganda, old boys and old girls of the different schools have teamed up with Entebbe Municipality to change the outlook of UPE schools in Entebbe by organising the annual Entebbe Marathon.
The Minister of State for Works Gen. Katumba Wamala through the Chief of Staff, Uganda Peoples Defence Air Force James Birungi thanked the Chinese for being there for Entebbe and for promoting sports.
He also thanked the organisers and sponsors, parents, old girls and old boys for supporting the marathon.
Entebbe Mayor Vincent Kayanja De Paul also thanked the sponsors but urged them to deliver future kit for the marathon in time so that Uganda's representatives in China can have enough time to prepare for the marathon.
The run was sponsored by Entebbe Municipal Council, SINOCHAM, Chinese Embassy, Africa Gold Refinery, CHC Analysis, Global Paper, Air Serve, Centenary Bank, Civil Aviation Authority, Protea Hotel, Lake Side Apartments, Bank of Africa, Imperial Group, Uganda Widlife Education Center and the National Research Organisation (NARO) as well as the old boys and girls of the different public schools in Entebbe.