MENU
Jacob Kiplimo is one to watch
Previous Story

Solskjaer is a breath of fresh air for Uni...
Next Story

Cheptegei makes up for 2017

Cheptegei, backed by an ecstatic home crowd, had taken the lead in the senior men’s 10-kilometer event of the World Cross Country.

Cheptegei, backed by an ecstatic home crowd, had taken the lead in the senior men’s 10-kilometer event of the World Cross Country.

Cheptegei in the World Cross Country in 2017 in Kampala where he was 30th. File Photo
Exactly two years ago, the world looked on in shock as Joshua Chetegei gave away what looked like an assured gold medal.
Cheptegei, backed by an ecstatic home crowd, had taken the lead in the senior men's 10-kilometer event of the World Cross Country.
President Yoweri Museveni together with the First Lady and Minister of Education Janet Museveni were amongst the big Kololo crowd that confidently cheered their own.
The 20-year-old Ugandan looked unstoppable as he raced to what had all the markings of a historic gold medal for his country.
Then suddenly with just 200m left, everything seemed to go wrong. He slowed down and started struggling to keep balance.
Head back and held stiffly to the side, Cheptegei staggered, lurched, tottered, wavered, tiptoed. He slid his hand along the tape that marked the winding path to the finish.
These last meters were excruciating. Miraculously he crossed the finish line without assistance or flat out collapsing, as the crowd watched, horrified. 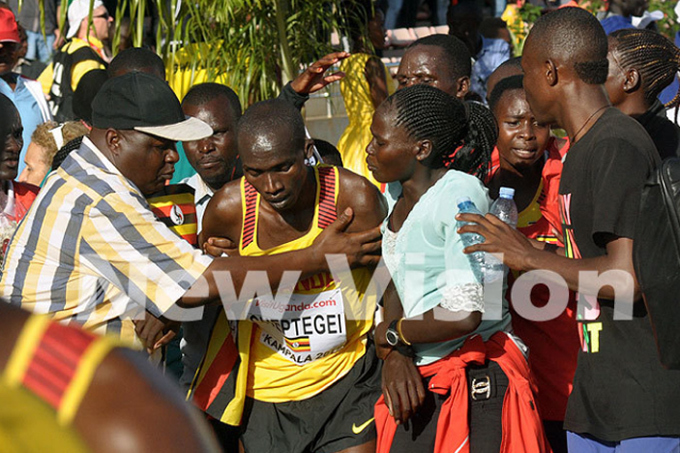 A total of 29 runners had passed him in the process as the home crowd went silent.
It is one of the biggest blows Uganda's athletics has suffered. The effect on Cheptegei was even more devastating. It took him months to recover.
But trust the fighter in Cheptegei. He did finally pull through, and when he did, one thing kept driving him- winning back that one title that he believed was rightfully his.
His recovery was indeed impressive as it came with several honours. These included a World Championship silver, two Commonwealth gold medals, and a 15km world record.
The best moment, however, came on Saturday as Cheptegei finally won the World Cross Country.
Making it even sweeter was the fact that amongst those falling in his wake was Kenya's two-time champion Geoffrey Kamworor.
Kamworor, who took bronze in Aarhus, was the biggest beneficiary of Cheptegei's misfortune at Kololo where he won gold.
It was a different story this time. "It was a very tough race and indeed the best man won," conceded Kamworor.
Cheptegtei was on his part overwhelmed. "I missed a gold in Kampala so I badly wanted a win this time."
Not even the sharp hills on the course were about to stop him. "I knew what awaited me in Denmark and seriously prepared high up in the Elgon mountains."
A bright smile lit up Cheptegei's face this time in place of an expression of pain he wore that hot March 2017 afternoon in Kololo.