Emong rewarded for his exploits in London ...
Next Story

Joshua Cheptegei flashed his pearly whites before the cameras as he showed off his gold on the podium in Aarhus. (Credit: AFP)

DENMARK - It's both history and his story in one. Joshua Kiprui Cheptegei has become the first Ugandan to win the Senior Men's title at the World Cross Country Championships.

The double Commonwealth champion made amends for his lacklustre performance on home soil in 2017, as he raced to gold on the tough course in Denmark, beating compatriot Jacob Kiplimo, who finished second, and Kenyan Geoffrey Kipsang Kamworor.

It was a great team performance for Uganda as Thomas Ayeko (7th) and Joel Ayeko (10th) also made Top 10 finishes. Albert Chemutai (12th) and Maxwell Rotich (27th) were the other Ugandan racers.

And with four finishers in the Top 10, Uganda also took the Senior Men's team gold - another first for Uganda.

"[On winning gold] It really means a lot. I missed it in Kampala, and I really wanted it here. The course was very difficult. The good thing is I had prepared well," said Cheptegei after the exhausting 10.240km race.

Around this time two years ago, under intense Kampala heat, Cheptegei was cruising to what many had decided was a big, historic win for Uganda. But his wheels suddenly flew off as the huge home crowd watched in horror as their favorite runner capitulated, allowing closest challenger Kamworor to snatch the gold.

But a lot has happened inbetween then and now.

After that disappointing show on home soil, the then-20-year-old would go on to pick silver at the 2017 World Championships in London, before securing double gold in the 5,000m and 10,000m races at the 2018 Commonwealth Games in Australia's Gold Coast.

On Saturday, he topped up that impressive two-year performance with a gold medal - Uganda's first - in Aarhus by shaking off Kamworor with the help of teenage compatriot Kiplimo. 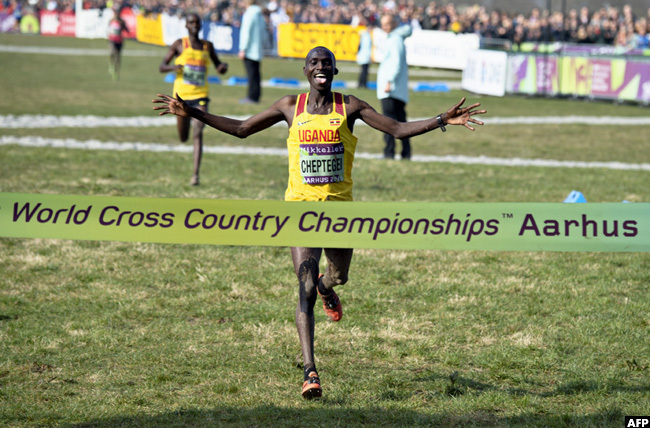 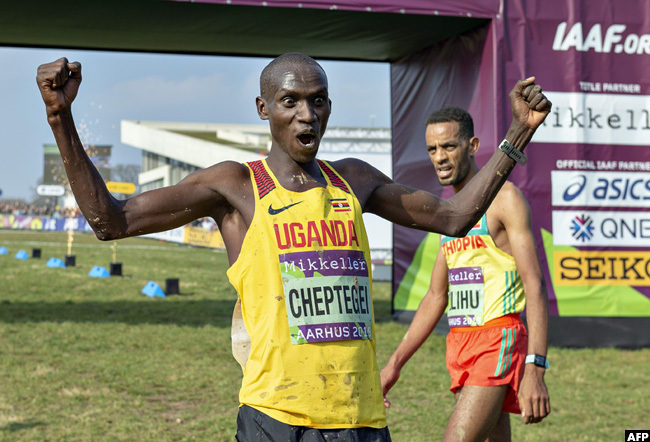 At 18, Kiplimo, running ever so comfortably on what has been considered the toughest course in World Cross Country history, would have become the youngest winner in the race's history to win the Senior Men's title - if he had taken gold.

But the 2017 Junior Men's World Cross Country champion was not to deny a determined Cheptegei, who was keen to make personal amends for his poor show back in Kampala.

The two Ugandans worked well at the front to keep at bay Kamworor, who has won the title twice before, and was looking to securing his hattrick of victories. And when the Kenyan was left for dead in the last lap, he decided he could not keep up with the Ugandan pair, settling for bronze.

Meanwhile, Oscar Chelimo bagged bronze for Uganda in the Junior Men's race with a 23:55 time. He came behind the Ethiopian pair of Milkesa Mengesha (gold) and Tadese Worku (silver).

Congratulations our athletic champions, @joshuacheptege1 and Jacob Kiplimo, upon winning the IAAF Senior World Cross-Country Championship in Aarhus, Denmark. In this race, Uganda registered a 1-2 finish.

We are so proud of you!! May God continuously bless your efforts.


In the Junior Women's race, Sarah Chelangat missed out on a podium finish by one second, beaten by Ethiopia's Tsigie Gebreselama to bronze.

In the Senior Women's race, Ugandans Rachael Chebet and Peruth Chemutai finished fourth and fifth in a race won by Kenya's Hellen Obiri, who created history of her own. She became the first woman to win the World Indoor, World Outdoor and World Cross Country titles.

Watch as Cheptegei races to history

.@joshuacheptege1 lead a historic Ugandan 1-2 in the men's race. It was a coming of age moment for the young Ugandans and a sign of much more to come 🇺🇬🤩

Kadaga castigates the executive for not implementing laws