Uganda-Rwanda border residents resort to i...
Next Story

“In Ugandan women, I have seen some of the most determined, enduring, natural born leaders and entrepreneurs who are resilient and filled with unmatched passion and pride for what they do," says Ambassador Susan Eckey.

“In Ugandan women, I have seen some of the most determined, enduring, natural born leaders and entrepreneurs who are resilient and filled with unmatched passion and pride for what they do," says Ambassador Susan Eckey.

KAMPALA - The Norwegian Ambassador to Uganda, Susan Eckey, has urged the women in the media to rise to the challenge of leadership and management in their respective media houses.

Eckey made the remarks during the launch of the Women in News Uganda (WIN Uganda) first national gathering 2019 at Hotel Africana in Kampala yesterday. The event brought together women in the media from various media houses including print, radio and TV.

Eckey asked the women journalists to be brave and fight the stereotyping in society.

"In Ugandan women, I have seen some of the most determined, enduring, natural born leaders and entrepreneurs who are resilient and filled with unmatched passion and pride for what they do," she said. 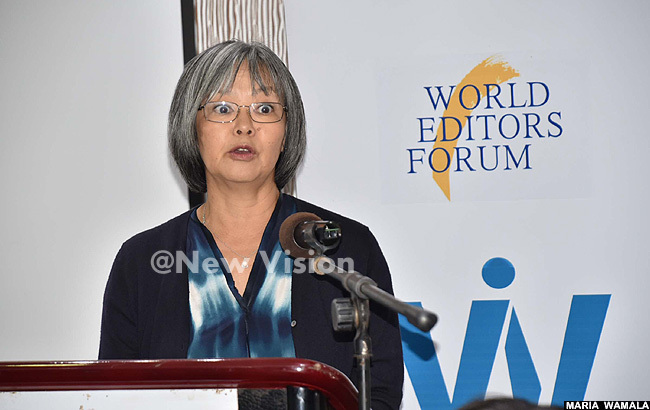 ‘‘Media is about culture and media is culture. Women are marginalised by culture. Sexual harassment is unacceptable and something should be done to curb the vice,'' Eckey said.

She urged women to take on more challenging roles such as becoming vibrant in areas of politics, commentary on financial matters and roles which are highly coveted, but occupied by mainly men. A well-attended meeting it was at Hotel Africana in Kampala The Vision Group, Editor-in- Chief, Barbara Kaija, thanked the Norwegian embassy for sponsoring the programme, which is the first of its kind in Uganda. Kaija urged the participants to take the programme seriously because its success would pave the way for more training opportunities.

She said the WIN Uganda programme was the perfect opportunity to help train women in management positions in the media. "In the newsrooms, people are just appointed into managerial positions without proper prior training and because of this, they face challenges coping with managing their colleagues," Kaija said. She asked women to learn to openly discuss challenges in their workplaces for them to be able to scale the ranks. The executive director for Uganda Women's Association, Margaret Ssentamu, highlighted the plight that women in journalism suffer such as some not being given maternity or annual leave.

The programme has been running in nine countries in East, Central and southern Africa for more than four years.

The WIN African director, Tikhala Chibwana, urged participants to apply themselves wholly in the coaching programme, saying they have been assigned the very best coaches. Penlope Nankunda, a contributing editor at New Vision, who is also among the participants, thanked the facilitators for the opportunity saying it will help them work through the challenges that they face in the workplace. WIN Uganda WIN Uganda is a media development arm within WAN-IFRA, which is a global organisation of the world's newspapers and news publishers, representing more than 18,000 publications, 15,000 online sites and over 3,000 companies in more than 120 countries.

Ambassador Susan Eckey @ the WIN launch: "In Ugandan women I have seen some of the most determined, enduring& fighting spirits... natural born leaders, entrepreneurs... resilliant women filled with unmatched passion & drive for what they do"@newvisionwire @WomenInNews @SusanEckey pic.twitter.com/bifLtFfaAy


The Women in News Programme is part of WANIFRA's development work to strengthen the capacity of media institutions by addressing poor representation of women in senior management positions. Rural power gets $13b boost

Rural power gets $13b boost