The writer with a friend during the 2019 Harvest Money Expo at Namboole inWakiso district. Photos by Gladys Kalibbala

I attended the 2019 Harvest Money Expo at Namboole stadium for the third time but this visit was purposeful.  Finally, I had been able to put together enough funds to help me go away with an irrigation equipment to help in watering my garden.

It seems the gentleman who was in front of me had the same dream as I heard him asking for directions to where he could find the irrigation equipment. The lady on my right tapped on my shoulder asking whether it was my first time to attend and I boastfully replied that I had been attending ever since the expo began.

Her concern was whether she will be able to get the irrigation equipment after a training session which she wanted to do first. She explained how she had challenges of dry seasons in her village in Gomba where she deals in mainly vegetables.

Although it's known that for vegetable growers, planting should start by the mid-March; she says it's currently difficult to determine the weather due to climate change. This made me realize that many farmers had decided not to be taken by surprise like the other year when Parliament petitioned cabinet to declare a state of emergency in a bid to arrest the food crisis in the country. 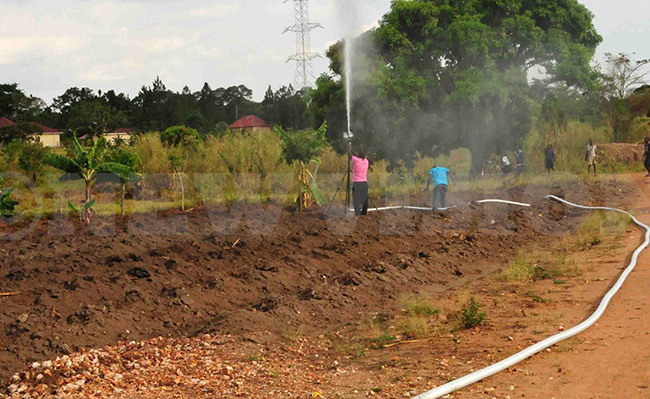 It had been an outcry almost everywhere and that time Parliament had declared that over 5.5 million people had been hit by famine after the country suffered a prolonged dry spell.

According to the National Population Census reports for 2014, between 70% - 80% of Uganda's population depend on Agriculture.

At the expo, there were various companies dealing in seeds and farmers were warned to be careful while buying seeds for planting. From different stalls, farmers learnt that at every planting season, about 30% of seeds planted are fake leading to failure of the seed to germinate. The boys preparing the mushroom at the farm

At the irrigation area

This area pulled a big crowd as farmers visited various stalls all dealing in irrigation equipment. What was so amusing was that whenever each company switched on their machines and water started pouring, more people would ran to that stall.

Farmers from rural settings without electricity were shown solar powered pumps which could assist them in their gardens. Interestingly, many of them had reduced prices purposely for the expo which enabled farmers to go away with the necessary equipment. 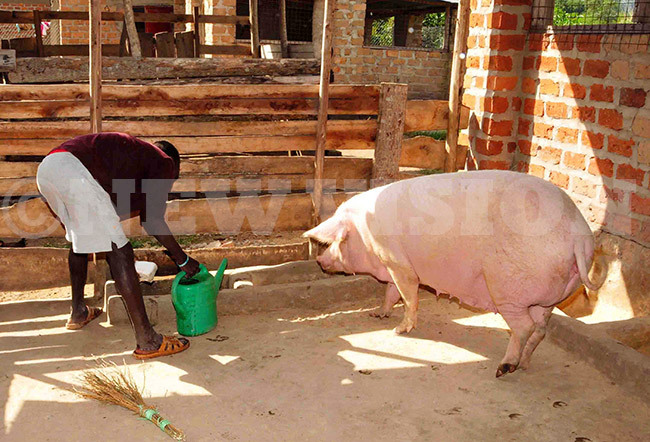 Pigs at the farm

Back at the farm

‘Perseverance Gardens' in Luwero started a few years ago with a lot of challenges as Jessica Yu describes in her book ‘Garden of the Lost and Abandoned' (which was a Gold Winner of the Nautilus Book Award last year in 2018)'.

Nautilus Book Awards have been around for 20 years, celebrating books that deal with social issues and the environment. They have winners in 24 categories, and GARDEN won the gold award for books about women! The gardens got the name from the challenges we went through, which indeed required perseverance.

Vision Group should therefore be hailed for providing such opportunities to both farmers and suppliers, which allowed them to learn from each other better ways of improving their farming businesses. At almost every stall, people were giving credit to the Vision Group CEO - Robert Kabushenga, explaining that he had opened their eyes.

At Perseverance Gardens, it was excitement as we started pumping water into the dry gardens being prepared for stevia plant. The stevia plant, which we first saw at the expo, last year already, has market at Prof Bioresearch in Kampala where we intend to sell it once it's ready for harvest.

Julius Nyanzi, the CEO for Prof Bioresearch got stevia in 2011 in tissue culture which he had mastered while at the University. He later found it in Kasese District and he also learnt that it can be grown in wetlands as it requires a lot of water.

In fact it's one of the reasons why I went for the irrigation equipment as stevia needs continuous watering. A well (water source) was dug in the garden to allow the pumping of water from the ground to the tank and later to the taps, making it easier to clean the piggery houses as well as watering mushroom gardens. At the gardens, we also have at least five goats plus local chicken.

Although the animals and mushroom were able to get enough water from the well, the gardens have been suffering greatly whenever it was a hot season resulting in poor yields of maize, cassava, beans and potatoes.

The Harvest Money Expo helped us to know where to get irrigation facilities plus many other farmers.

We hope the sky will be the limit for Perseverance Gardens especially after the assistance it received from good Samaritans like Ralph and Shirley Shapiro, Jessica Yu and her family plus many other good Samaritans who bought the book.

We are very grateful to the young school children led by Reilly Kidwell from Northern California who contributed to the success of the gardens.

The boys are now very excited with the developments in the area. This place which now has a small house, accommodates a few abandoned school boys during holidays.