The new premier warns the situation in the North African country is "sensitive".

The new premier warns the situation in the North African country is "sensitive".

Algeria's new prime minister sought to calm tensions Thursday ahead of planned demonstrations that could be decisive for the protest movement calling for President Abdelaziz Bouteflika to step down.

Noureddine Bedoui spoke on the eve of the first Friday rallies since Bouteflika's surprise announcement this week that he would not seek re-election but was cancelling April polls.

The new premier warned the situation in the North African country was "sensitive".

People "must show calm and act peacefully", Bedoui said, calling for "dialogue" to resolve the situation.

Bouteflika, 82, initially sparked joy among protesters when he said he would not stand for a fifth term in next month's election, but his move to cancel the vote prompted accusations of "tricks" and sparked a new round of demonstrations.

Friday's protests will be a key test of whether the ailing president's manoeuvre has dampened anger on the streets.

An Algiers derby between the capital's rival football clubs, USM Alger and MC Alger, on Thursday had a low attendance following a call for fans to stay away from the rescheduled match over fears of potential trouble.

"How can a derby be played when the country is going through a crisis?" said leaflets posted in Algiers and shared on social media.

An icon of the country's war of independence from France, Djamila Bouhired, on Thursday warned Algerians to be wary of having their victory stolen.

"Your elders liberated Algeria from colonial domination, and you are giving back to Algerians their liberties and their pride despoiled since independence," the former militant said in a statement. 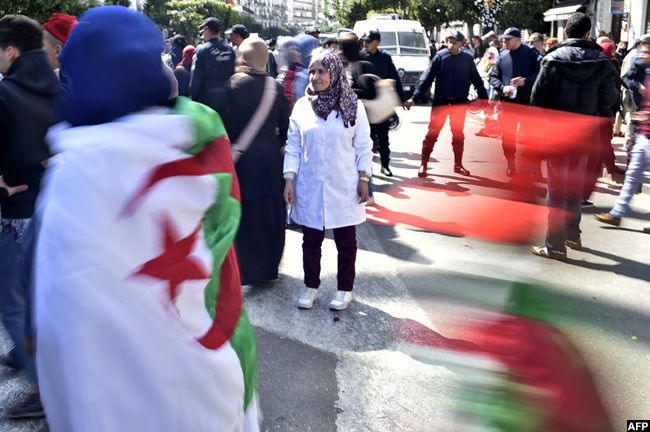 The protest movement has been led by students, in a country where half the population is under the age of 30 and youth unemployment has spurred anger against a government seen as out of touch.

Bouteflika also said he was replacing unpopular premier Ahmed Ouyahia with former interior minister Bedoui, who on Thursday defended the postponement of the poll, seen by many as unconstitutional.

"There is nothing above the will of the people," he said.

Bedoui vowed to create an administration of technocrats, including young men and women.

"We have heard the message of the Algerian youth," he said, adding that the new government would be revealed by next week at the latest.

Bouteflika has promised a "national conference" to carry out reforms and set a date for new elections "before the end of 2019", suggesting he may stay in office for another year.

Incoming Deputy Prime Minister Ramtane Lamamra, who appeared alongside Bedoui at a news conference in Algiers, said the previous evening that the conference should happen "as soon as possible".

"The absolute priority is to reunite the Algerians and allow them to go together towards a better future," he said.

"It's not about staying in power for a few weeks or a few months more."

Lakhdar Brahimi, a veteran diplomat and former UN envoy for Syria, on Wednesday denied having been appointed as head of the proposed conference.

"I cannot say no (if asked to serve) but I would prefer if they find a man or a woman better than me" for the job, he said in remarks on state television.

Brahimi drew attention after he paid a visit Monday to Bouteflika following the president's return from Switzerland where he spent two weeks at a hospital for medical checks.

He said that Bouteflika, who uses a wheelchair and has rarely appeared in public since suffering a stroke in 2013, has a weak voice but "has regained 100 percent his intellectual faculties."

Parties must have internal democracy