Makerere University (MAK) has disowned a letter ‘allegedly' authored by the Vice Chancellor, Prof Barnabas Nawangwe that suggests him rallying behind one of the candidates in the Guild President race.

A total of nine candidates are vying for the highest student's political office. They include; Joshua William Mukisa, Joshua Katerega, Andrew Julian Taliwaku, and Milly Namuddu, the only female in the race.

Others are; Winter Muhangi, David Musiri, Onesmus Mutumba, one Umar and one Osbert.

However, yesterday social media was awash with a letter purportedly written by Nawangwe, authorizing a fund transfer of sh5m to support Julius Katerega, on condition that he (Katerega) serves the interests of the administration once he becomes Guild President. 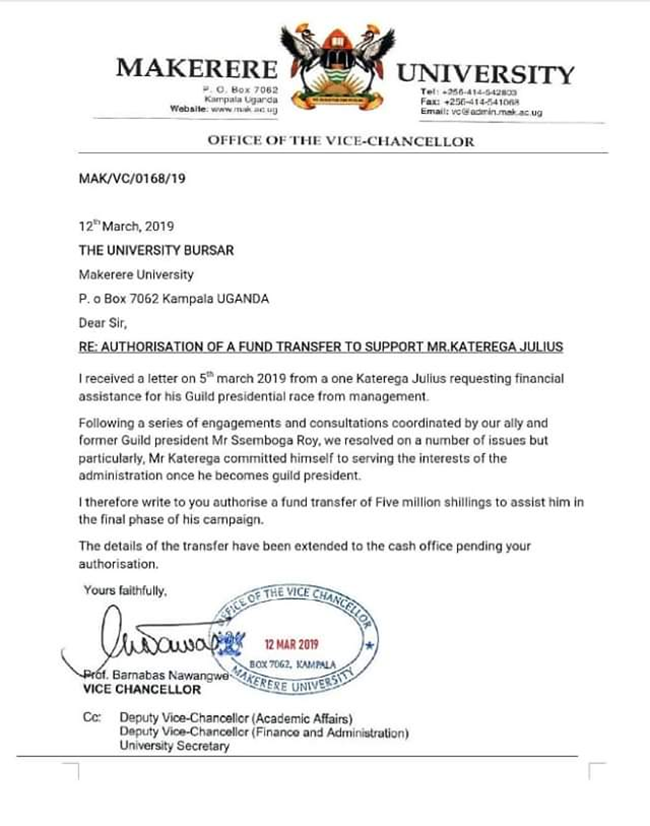 Describing the letter as ‘fake', Dr Muhammad Kiggundu Manager Communication and International Relations in a press statement released last evening said the university management had already started investigating circumstances under which the letter was written.

"It has come to the attention of Management that some fraudulent individuals are spreading fake communication suggesting that the University Management is inclined towards certain candidates in the ongoing guild race," Kiggundu stated.

"Makerere University management does not interfere in student guild elections and the electoral process is managed by the students themselves. Any claims of management inclination towards specific candidates in the guild race is based on forgery of official letterheads and manipulation of signatures of the University officials," he added.

Kiggundu said the university had currently established the ‘deceitful tactic' is commonly referred to as a chemical which is intended to malice and undermine fair competition in student guild elections.

Agatha Nuwagaba, the deputy Electoral Commission chairperson said elections shall be held at every college and results computed and announced in the evening.

She said of the 11 candidates that had registered to run, two pulled out last minute, which she said was accepted by law.

Csabaâ€™s tactics were excellent for Cranes