Brightly coloured solar powered mobile clinics fitted with software to detect tuberculosis in less than a minute have been developed.

Brightly coloured solar powered mobile clinics fitted with software to detect tuberculosis in less than a minute have been developed.

Due to the stigma surrounding TB, many are reluctant to get tested, and unknowingly transmit the illness to a huge number of people. As this year's World Tuberculosis Day draws near, the Dutch have innovated a solution to encourage TB testing.

Brightly coloured solar powered mobile clinics fitted with software to detect tuberculosis in less than a minute have been developed. The cheerful design of the clinics, which do not suggest they are associated with TB in any way, shape or form, will help make diagnosis and treatment more accessible and acceptable because many are reluctant to test.

Guido Geerts, CEO of Delft Imaging Systems, the company behind the innovation explains that in many places, especially remote areas, TB is a major taboo and because people don't want to be associated with the disease in any way, they often only see a doctor once they really have to.

"The company has invited local artistes to paint the clinics in bright, cheerful colours so people do not have to be afraid of the exterior design of the clinics.  And not only do the designs help break the taboo, but they also attract people to come and admire the artwork, at which point they often come inside to take a test there and then. It's a win-win!" he said in a communiqué.

The mobile clinics which are self-sufficient can drive to the remotest areas in the bush, the desert or the countryside in order to screen the local inhabitants for tuberculosis. 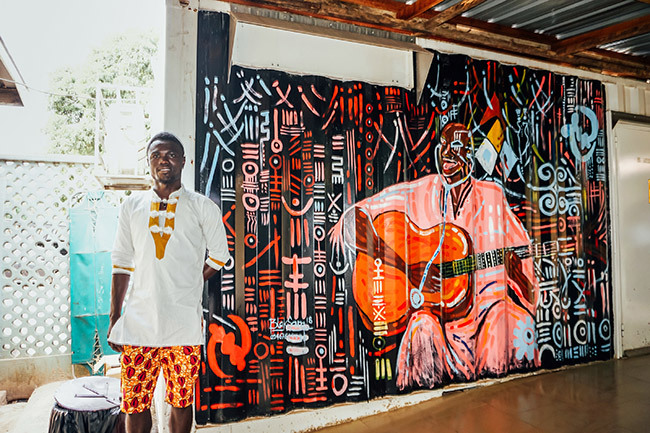 "Screening can be conducted in less than a minute, thanks to digital X-ray scans and the TB detection software CAD4TB, and no radiologist is required as the software's artificial intelligence can immediately indicate whether or not the person's lungs may be infected with TB," reads the communiqué.

In case the lungs are affected, the GeneXpert GXP lab test can provide a definitive diagnosis within two hours. All of these advancements enable the clinics to screen up to 300 people a day anywhere in the world.

"To fight TB around the world, Delft Imaging Systems is actively participating in 45 projects in 35 different countries by providing innovative solutions that have enabled TB screening of over three million people," reads the communiqué.

Each year, World Tuberculosis (TB) Day is commemorated on March 24th to raise public awareness about the devastating health, social and economic consequences of TB, and to step up efforts to end the global TB epidemic.

The date marks the day in 1882 when Dr Robert Koch announced that he had discovered the bacterium that causes TB, which opened the way towards diagnosing and curing this disease.

WHO estimates that a quarter of the world's population has TB infection. Each day, nearly 4500 people lose their lives to TB and close to 30,000 people fall ill with this preventable and curable disease.

Uganda is one of the 22 high TB burden countries in the world. The country registers about 5000 TB related deaths a year.

According to health minister Ruth Aceng, government of Uganda has invested in new diagnostic technologies like the Gene Xpert machines.  There are now 249 functional Xpert machines spread out in 227 health facilities covering all districts in the country.

The utilization of these equipment has improved to 9.1% tests per day, however, this still falls short of the expected 12 tests.

Motocross: Maxime back to inspire Uganda in Nairobi