What will Alalo's final resting place be?
Next Story

Businessman Medard Kiconco wanted the court to issue an interim order against the Lusanja residents, stopping them from reconstructing houses on the disputed land.

One of the residents of Lusanja whose home was demolished washing clothes in front of a makeshift tent her family shares with another family. Photo by Lawrence Mulondo

Businessman Medard Kiconco wanted the court to issue an interim order against the Lusanja residents, stopping them from reconstructing houses on the disputed land.

The High Court has declined to halt the ongoing reconstruction of houses on the contested site in Lusanja in Wakiso as requested by businessman Medard Kiconco who claims ownership of the disputed land.

On Wednesday, the deputy registrar of the land division of the High Court, Samuel Emokor, said although Kiconco's prayer is justified, the order could be abused.

"An order for stay of the reconstruction of the houses could be abused by the applicant and add tension to both parties," he stated.

The registrar also noted that the exact location of the property is still under contention and it would be unfair to grant the same.

Kiconco through his lawyer, Rashid Babu wanted the court to issue an interim order against the Lusanja residents, stopping them from reconstructing houses on the disputed land.

The residents, who turned up in big numbers at the court are represented by lawyers Abdullah Kiwanuka, Luyimbazi Nalukoola and Erias Lukwago.

The lawyers asked the court to first hear the case in which a group of 128 Lusanja residents want to be joined as a party to the case on grounds that they could be prejudiced by the outcome of the case yet they live on the land.

However, Kiconco's lawyer asked the court to throw out the resident's application, stating that if allowed, it would mean they are forcing his client to sue them yet it is not their property.

In December last year, Kiconco dragged 17 people to the court stating that they were squatters whom he had compensated to vacate the land.

The residents were jointly sued with the lands state minister Persis Namuganza and Rosemary Sseninde, the state minister for primary education, accusing them of incitement. 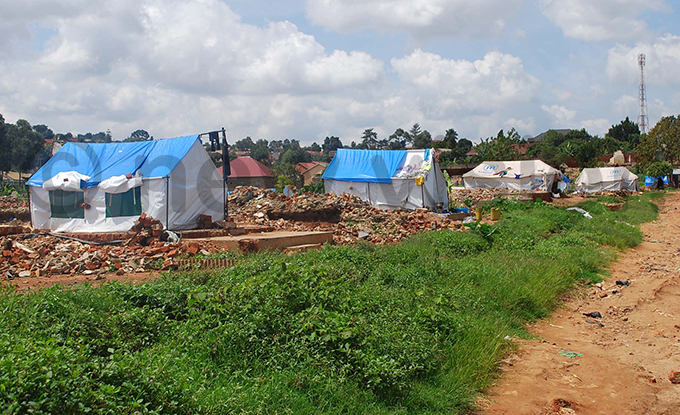 Kiconco accuses the ministers of inciting people to stay on his land in spite of the fact that he compensated them of about sh100m. The land in question measuring 3.89 acres is located on Block 206, Plot 671 at Mpererwe in Kampala.

He claims that by the time he bought the land from Paul Katabazi Bitarabeho in 2013, there were only 17 squatters, which he compensated.

The disputed land is part of the 85 acres that the late Bitarabeho bought in 1978 from the late Namasole Bagalaayeze Lunkuse, the mother of Kabaka Mwanga of Buganda.

He wants the court to declare that the defendants trespassed on to and are illegally occupying his land and should vacate it.

Although Kiconco claims his land is on Block 206, Plot 671 at Mpererwe in Kampala, the residents say their land is on block 198, Folio 13 in Wakiso district.

Genesis of the case

On January 12, 2017, Kiconco filed a civil suit at Nabweru Chief Magistrate's Court seeking orders for abetment of a nuisance, demolition order, and delivery of vacant possession, permanent injunction and award of damages plus costs of the suit.

On October 3, 2017, Nasambu delivered judgment with orders declaring the defendants as trespassers, a permanent injunction against the defendants, demolition of structures and sh20m in damages plus costs of the case.

It is upon this ruling that Kiconco went to the High Court's execution and bailiff's division and secured a demolition order.

The eviction attracted mixed reactions from many Ugandans including President Yoweri Museveni.

On October 16, 2018, President Museveni in the company of Justice Catherine Bamugemereire, the chairperson of the Commission of Land inquiry even visited the locus and halted the demolition of another 240 houses.

On December 14, last year, John Eudes Keitirima ruled that the residents were wrongfully evicted from Lusanja land because the trial magistrate had no powers to handle the case.

UN in negotiations on Libya ceasefire