How to choose a good kindergarten
Next Story

Learners are described as the right people to be taught the gospel of health, sanitation and sustainable use of Lake Victoria.

Students and teachers attending the launch of the competition. (Credit: Julius Luwemba)

Learners are described as the right people to be taught the gospel of health, sanitation and sustainable use of Lake Victoria.

The municipalities of Jinja and Entebbe have launched a schools sanitation competition dubbed Lake Victoria Inter-local Authorities Schools Public Health Competition, which will run for one year under a pilot programme.

The programme, launched at the beginning of this week at Entebbe Municipality headquarters, will include both primary and secondary schools around Lake Victoria, starting with those from Entebbe and Jinja for the pilot study.

Thereafter, it will be extended to other areas which share Lake Victoria as a common natural resource.

According to Mercy Ssebuliba, the programme's co-ordinator, the competition is aimed at improving sanitation and health starting with learners, whom he described as the right people to be taught the gospel of health, sanitation and sustainable use of Lake Victoria. 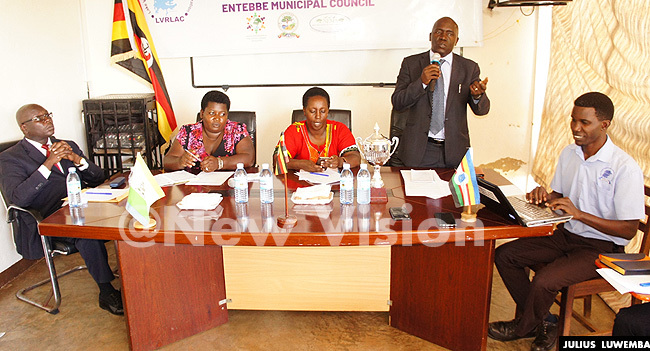 Entebbe municipality mayor Vincent Kayanja de Paul applauded the initiative spearheaded by Community Based Public Health initiative (CBPHi) a Non Government Organisation, saying, it's such a great opportunity for leaders and elders to engage with young generation on matters of environmental conservation and sustainability.

Midious Mbabazi, the deputy mayor of Jinja, pledged total support towards the new programme, also vowing that her municipality would win the competition. She described Jinja as a clean town where learners are always taught to value and conserve the environment.

Sandra Kyamazima is the vice president of Youth Empowerment for Climate Change Mitigation (YECCM), which is a partnering  body in the programme.

She said a team of inspectors will be making impromptu tours at the schools from either municipalities, to ascertain the health and sanitation conditions.

"We shall be looking at toilets/latrines, rubbish disposal, water sources, school structures, learners' cleanliness, among other factors to be considered for judging the competition," said  Kyamazima.

It will as well involve both private and government schools.

A group photo at the Entebbe Municipality headquarters

Entebbe Municipality MP Rose Tumusiime welcomed the initiative, pledging sh1m towards the programme. The initiative is being sponsored by Lake Victoria Regional Local Authorities and Counties Co-operation (LVRAC) through CBPHi.

LVRAC is a network organisation of over 62 local authorities with a population of over 25 million people in the shore region of Lake Victoria, in Uganda, Kenya and Tanzania.

Rotarians give free medical care to over 700 patients

Over 500 residents get free health services