Police pushing students back to the campus premises. Photo by Julius Luwemba.

ENTEBBE - Police in Entebbe was forced to fire teargas to disperse Nkumba university students who had blocked Kampala-Entebbe highway in demonstration of what they termed as frequent accidents on the highway. 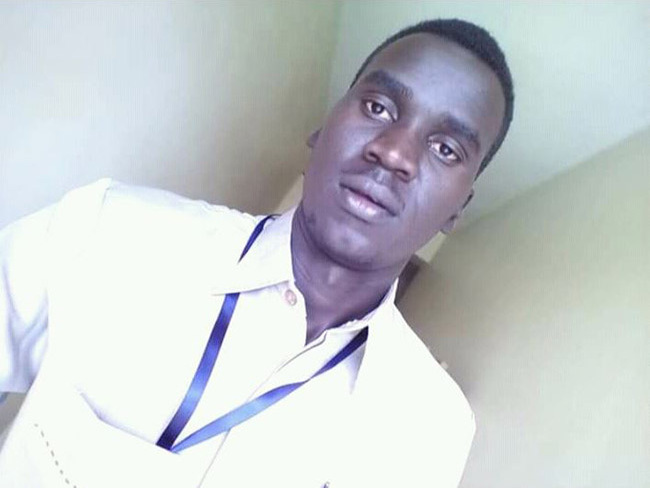 Gatot who was knocked by a speeding vehicle, died as a result of open head injury with severe hemorrhage flowing, according to the postmortem report. He was a second year student of Petroleum and minerals geo-science at Nkumba university.

His sudden demise sparked a strike within circles of fellow nationals from South Sudan, before being joined by other students on Saturday, chanting in protest of the continued motor accidents along Entebbe road.

The completion and subsequent grand opening of Entebbe expressway in mid-June last year, brought much hope in the transport sector, easing traffic flow on Uganda's gateway route. The Expressway project which cost Uganda over Sh1.2 trillion, gave an opportunity for an expansion of Entebbe road from two to four lanes, from areas of Mpala in Katabi town council up to the airport, which is expected to be complete by mid this year.

The easy traffic flow has resulted into rampant motor accidents, claiming twelve lives on average, every after twenty four hours. According to Mathew Kibuuka the manager in charge of data at Entebbe general hospital, most of the accidents happen at night. "Most of the accident victims are brought and just dropped at the hospital, without any information or data." said Kibuuka during an exclusive interview on Sunday. Motorists have taken advantage of the new swift road (though not complete), to recklessly drive at a terrific speed, knocking down pedestrians and other road users.

Entebbe better known as a hang-out destination due to the big number of beaches and night clubs in the area, has contributed to fatal accidents on the highway. A medical worker at Joyatz clinic which is found at Katabi stage in Entebbe municipality puts the number of accident victims at four every after one day, that are taken to the clinic. "Every time am attending night duties, I receive at least two accident casualties before referring them to Entebbe general hospital for further treatment." said the medical personnel at Joyatz clinic.

Obadiah Ssewanyana the Assistant Superintendent of Police (ASP) in charge of traffic at Entebbe police station, noted that many accidents go unnoticed by the traffic police because they are not reported.

The sharp-pointed poles which separate the four lanes, have been mentioned as another cause of deaths on the Uganda's gateway route. Julius Tumusiime a boda boda cyclist at Katabi Gombolola stage revealed that some people who suffer motor accidents are finished off by the sharp-pointed pipes which were put as separators between the lanes. "I have seen over eight people knocked down, only for their lives to be finished off by those metals." said Tumusiime.

Last year, area leaders including Vincent Kayanja the Entebbe municipality mayor and Ronald Kalema the Katabi town council chairperson, addressed the issue of sharp pointed metals to the Uganda National Roads Authority (UNRA). In response, the sharp points of metallic bars are gradually being covered with a pipe, wielded on top.

Due to the on-going road works, there are frequent diversions on the road whereby, vehicles may use a certain lane in the morning only to find it closed in the evening. "It is very confusing because we end up knocking people, not knowing that the lane was closed a few hours ago." said Manisoor Kibirige, a taxi driver on Entebbe road. This is coupled with the busy streets of towns like Abaita-Ababiri and Katabi stage, where there are many businesses by the road side.


Arrogance of some road users

Standing along Entebbe road, one can't miss to see at least three people in every ten passing vehicles, who drive while talking on phone. Having evidently witnessed such a scenario, this reporter engaged a traffic officer who seemed to be doing nothing about drivers cruising while talking on phone. "Most of those are soldiers whom we have tried to put to order, but in vain." said a lady traffic officer. Although driving personal saloon cars, most of the drivers seen talking on phone, had military wear inside personal vehicles. The traffic officer who preferred not to be mentioned, said, such people usually deviate from allocated lanes hence causing accidents.