"We request government to move the registration of national identity cards from sub-counties to parishes. Majority of elderly people have bone and knee related illnesses which affects their movement and find it difficult to  walk such long distances," said Mariam Mulindwa, a mobilizer and crafts coordinator at Phoebe Education Fund for Orphans and Vulnerable children (PEFO).

PEFO is a non-governmental organisation caring for vulnerable orphans, HIV affected and infected elderly women based in Jinja district.

Mulindwa made the appeal during a dialogue organized by the Grandmothers Consortium in partnership with Rural Women and Youth Fund Uganda  to mark the International Women's Day celebration under theme: "Empowering Women through Innovative Approaches to social Protection: A Pre-requisite for Inclusive and Sustainable Development."

This was at Excel Millennium secondary school in Kyengera, Wakiso district on Wednesday.

Grandmothers Consortium is an umbrella organization that brings together about six Ugandan grassroots civil society organizations to advocate and lobby for the rights of older women. 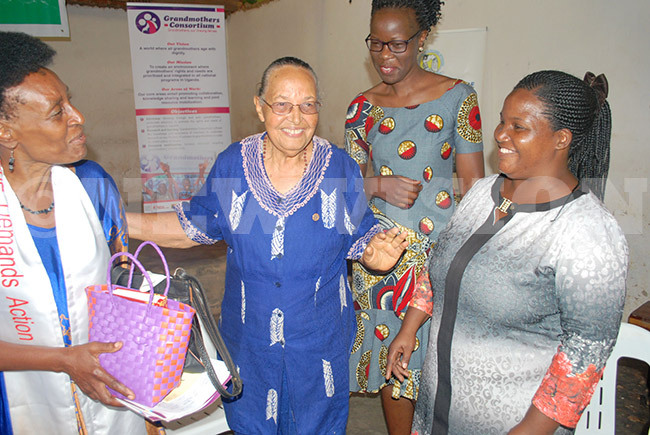 Luliana Bezuldenout, the private secretary of the president of older persons (centre) chats with members of the Grandmothers Consortium

"We thought getting to a sub-county is close enough. Elderly people who cannot walk can be assisted to move to registration points by their relatives," he said.

At the beginning of the year, National Identification and Registration Authority (NIRA) extended registration exercise for national identity cards for individual who missed out for three months; from January to March.

Juliana Bezuidenout, the private secretary to the president of older persons who officiated the dialogue urged the elderly women to register and pick their national identity cards.

Emphasising the importance of the national identity cards, Bezuldenout said the elderly will be required to present their cards when they go to places that require identification such as banks, while travelling out of the country or when picking SAGE money. 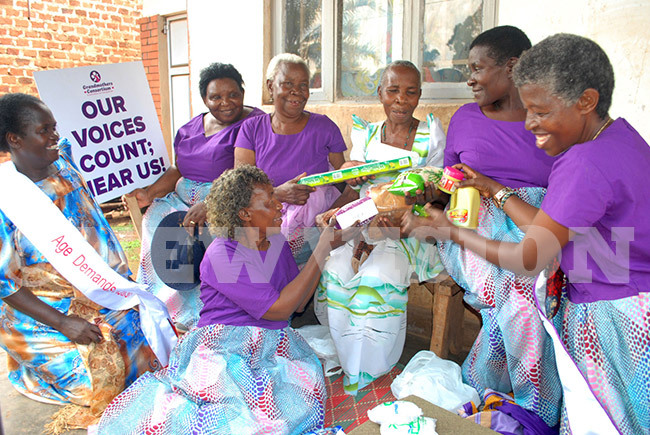 As part of the celebration activities, the elderly women marched through Nabaziza village. During the march, the women made stopovers at the homes of the frail and immobile elderly women; Naloongo Maria  Thereza Namukasa, 81 and Esimaisi, 85 to donate gifts.

Peace Kyamureku, the executive director Rural Women and Youth Fund Uganda (RUTH FUND) said they choose to give gifts to the elderly women to demonstrate the need for social protection as against unexpected accidents and vulnerabilities. For instance, Naloongo Nakusasa lived a normal mobile life until December 24, when she fell and sustained a hip dislocation.