Over 50 districts to receive grants for ma...
Next Story

Shantel Partel, the executive director Apar Foundation preparing a woman to be tested for sickle cell during the health camp at Kirinya. Photos by Agnes Nantambi

The health camp, which attracted residents from Bukasa, Kirinya, Bweyogerere and Namataba, among other neighbouring villages, was supported by Seyani Brothers and Company Ltd.

Prudence Asobola, the project coordinator of IMF, said the needs assessment conducted in the areas established that the biggest population in the area were youth and women who lacked access to health services. 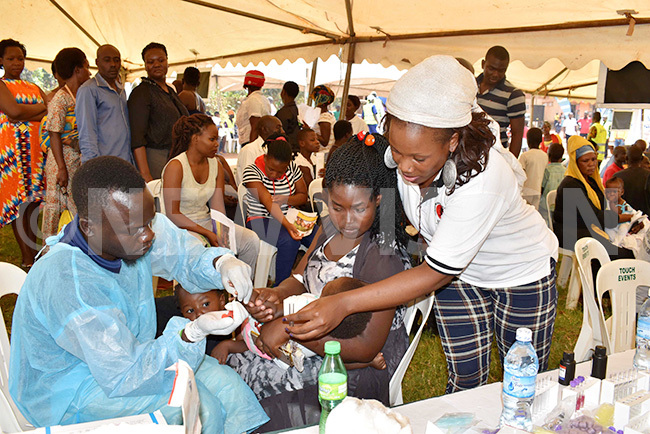 Others are, Uganda sickle cell rescue foundation providing sickle cell screening, among other services like free treatment and screening for hypertension."

The chief executive of Apar foundation, Shantel Patel said on the side of children, the needs assessment established that many children in the area were suffering from tooth decay and poor nutrition, which called for improvement.

"We decided to partner with IMF to ensure that we provide nutrition to the children in the area on top of offering them with treatment for their teeth, eyes and noses among others," she said.

Tracy Nagawa, the project manager the Uganda sickle cell rescue foundation said the camp was a very big opportunity for the people of Kirinya to access free sickle cell screening.

She explained that the current challenge of sickle cell is the fact that people always want to go for testing during the last stages of their marriage preparations, which is making it hard for couple to take decisions.

"You should get to know that before you move further with any partner of your choice by testing for sickle cells to avoid the repercussions," she said.

She applauded the funders of the health camp for financing free health care services, noting that many people find it difficult to test for sickle cells.

Namulidwa Jackie, one of the residents who turned up for the camp applauded the organisers of the camp for providing free health services, saying that this was the first time it was happening in the area.

"I and my child have received the best services, my tooth has been uprooted on top of the family planning services and free treatment for my child, "she said.

MPs to Police: Out of here