Katende, who is Uganda’s Ambassador to the US, is now concurrently non-resident ambassador of Uganda to Argentina.

Katende, who is Uganda’s Ambassador to the US, is now concurrently non-resident ambassador of Uganda to Argentina.

Ambassador Mull S. Katende presented his letters of credence to President Mauricio Macri of Argentina on February 26, 2019 at the President's Office in Buenos Aires.

Katende, who is Uganda's Ambassador to the US, is now concurrently non-resident ambassador of Uganda to Argentina.

President Macri welcomed Katende and congratulated him on his appointment as Ambassador Plenipotentiary and Extraordinary of Uganda to Argentina with residence in Washington D.C. He asked Katende to convey his personal greetings and best wishes to President Yoweri Kaguta Museveni. 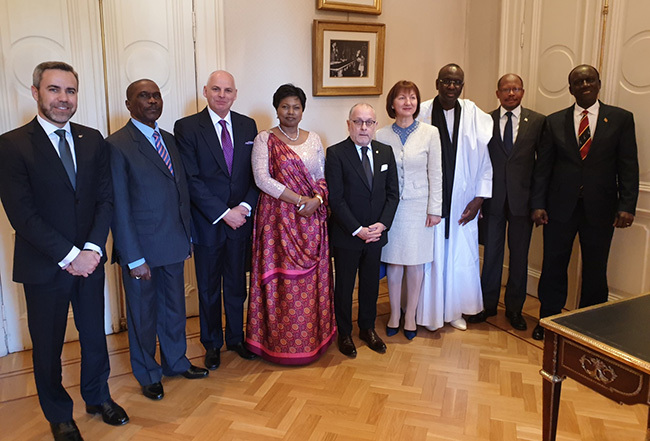 Katende thanked Macri for the opportunity to present his letters of credence and conveyed greetings and best wishes from Museveni. He pledged to work hard, with the assistance of Uganda's Honorary Consul, Dr. Enrique Segura, to enhance and boost bilateral relations between Uganda and Argentina.

Katende said he would focus on promoting trade, investment, tourism, education and cultural cooperation between Uganda and Argentina.

Macri wished Katende well in his new appointment and pledged the support of his government to work towards stronger cooperation with Uganda at both bilateral and multilateral levels.

Macri also received letters of credence from seven other ambassadors-designate of the following countries: Cyprus, Mauritania, Guyana, Rwanda, Lithuania, Republic of Congo and San Marino on the same day.

Katende and the seven other newly accredited ambassadors were led to San Martin's square to lay a wreath at the General San Martin Monument in honor of Jose de San Martin, the national liberation hero of the Argentine Republic.

Jose de San Martin was an Argentine soldier, statesman and national hero who led the revolutions against Spanish rule in Argentina (1812), Chile (1818) and Peru (1821).