Ongwen was no brutal rebel, says Kony's es...
Next Story

The minister of internal affairs was not in position to proffer a response, requesting for more time to address his mind to the legal regime on the matter

Police lead cars paving the way for other motorists is a common sight on Uganda's roads. File Photo

The minister of internal affairs was not in position to proffer a response, requesting for more time to address his mind to the legal regime on the matter

The scene is quite familiar on Uganda's narrow and chaotic roads, especially in Kampala and its environs.

Amid a cacophony of taxis, bodabodas, private cars and pedestrians with no walkways all struggling for space, wailing sirens pierce the often sultry air.

For many road users, often tired after a day of hustling, or stuck in jam on the way to drop or pick a child from school, it's a harbinger for the arrival of a VIP.

And the vehicles of these VIPs are driven menacingly, sometimes on pavements, or on the wrong side of one-way drives. Many times, gun-wielding escorts of these VIPs literally shunt other road users off the roads.

On Wednesday, the Speaker of Parliament asked the minister of internal affairs, Gen. Jeje Odong a question that is on the lips of many Ugandans: "Who is entitled to lead cars?

"This needs to be addressed because they are everywhere. You are in jam and the next thing you see is a Premio with a lead car. Who is entitled to a lead car?" Kadaga said. 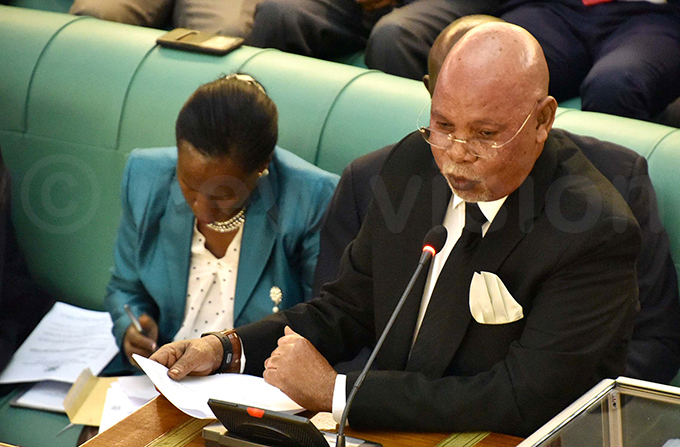 Internal affairs minister Jeje Odongo making a presentation on the floor of parliament on Wednesday. Photo by Maria Wamala

However, Odong was not in the position to proffer a response, requesting Kadaga for more time to address his mind to the legal regime on the matter.

"I need to go back and check the law, its something I cannot address this House about right now," Odong said.

The Traffic and Road Safety Act makes it explicit that "emergency motor vehicles" have a right of way. Section 123(5) of the aforesaid Act enumerates these vehicles to include police cars, fire brigade, ambulance and military vehicles.

Under Regulation 5(2) of the Traffic and Road Safety (Rules of the Road) Regulations, 2004, the vehicles of the President, Vice President, Chief Justice, Speaker of Parliament or the Prime Minister too have a right of way.

However, the Inspector General of Police, in given circumstances can afford an individual not explicitly mentioned in the aforesaid legal regime as deserving a lead car.

Once such an individual is given a lead car, then he/she joins a select club of people who enjoy a right of way on Ugandan roads.