Policemen that have been deployed at one of the busy points in the Old Taxi Park to prevent further fights between different factions of taxi touts. Photo by Eddie Ssejjoba

The Police in Kampala is still hunting for a group of rowdy commuter taxi drivers and conductors who beat up journalists and confiscated their equipment.

The journalists, Moses Kiyingi, attached to Delta Television and Joseph Balikuddembe, a reporter for Central Broadcasting Corporation (CBS) were on Thursday beaten while covering a scuffle between taxi touts at Entebbe stage in the Old Taxi Park.

The two journalists were rescued by Police personnel from the nearby Mega Police Post.

They were later rushed to Mengo Hospital where they were treated for minor injuries.

Balikuddembe said that while recording the developments, the taxi men turned against journalists, hitting them hard using metallic objects on the suspicion that they were working for another faction and confiscated their gadgets and phones.

"The taxi drivers knew us well because we have been covering news in this place, and my colleague was wearing a branded jacket, so this must have been an intended move to assault us," Balikuddembe, who later reported a case of assault to the Police stated.

The Old Taxi Park, located in the heart of the city, has been a scene of violent clashes between factions over a number of issues including delayed elections of leaders.

The taxi drivers also recently blocked Kampala Capital City Authority's scheduled renovation of the place on suspicion that it was cover for the Authority to hand over the park to businessmen who acquired the land are planning to develop them.

The clashes have often inconvenienced passengers and paralysed the transport industry. 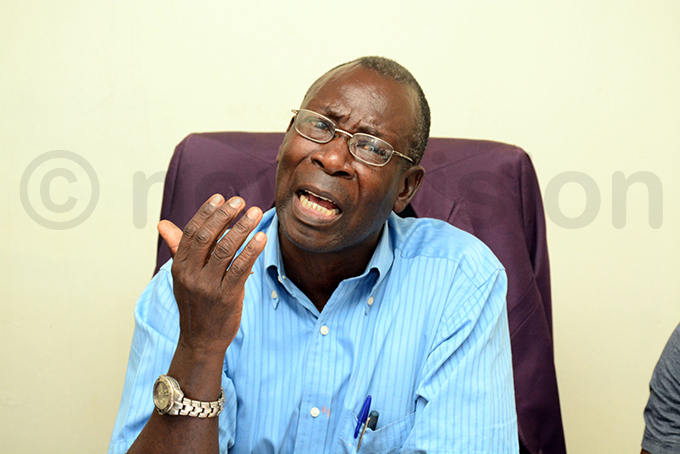 Moses Mawejje Birungi, the spokesperson of KOTSA, one of the taxi organisations for drivers and conductors in Kampala addressing the media at Nalubwama Arcade. Photo by Eddie Ssejjoba

The Kampala Metropolitan Police spokesman, Patrick Onyango, confirmed the incident, saying Police was investigating the matter and hunting for the culprits.

The spokesperson of KOTSA, one of the taxi drivers' associations that manages 194 taxi stages in Kampala City, Moses Birungi, regretted the incident and said they were working closely with the Police to ensure the suspects were apprehended.

He said a scuffle erupted at the stage after a section of drivers, who were assisted by hired musclemen, blocked the main exit of the taxi park after management at the Entebbe stage failed to resolve their grievances, bringing business in the entire area to a standstill.

He said the journalists were victims of a fist fight between drivers over a number of grievances, with a group demanding for payment of their welfare money, which he said was long overdue.

The drivers, according to Birungi, were demanding for fresh elections and streamlining the procedures of picking passengers from the stage.

"The management has intervened has been trying to resolve the matter," Birungi explained.

Meanwhile, the Police who were recently deployed has continued to monitor the area to prevent further clashes.

KCCA tells LCs to enforce hygiene in their parishes