KAMPALA-The Police have handed over the contentious Qualicel bus terminal, to Drake Lubega and Yanga Matovu.

Muhangi died last year a few weeks after court had ruled in his favour over the terminal.

Since Wednesday afternoon the Police has deployed heavily and ordered a group managing the facility on behalf of the late Muhangi to leave.

The Police, led by the Field Force Unit (FFU) commander for Kampala Metropolitan Police (KMP), Senior Superintendent of Police Rashid Angero and the Central Police Station commander (DPC), Ronald Wotwali deployed at the Qualicel Bus Terminal, Qualicel Building and Nabukeera Plaza at around 2:00pm and took over the bus terminal (formerly Baganda Bus Park) amid resistance from the Muhangi group.

The facilities, including a bus terminal and a commercial arcade on Plot 50 to 52 Nakivubo Road adjacent to Kikuubo business centre have been a point of contention between Muhangi and two city tycoons, Francis Drake Lubega and Mansoor Matovu aka Young.

President Yoweri Museveni met the two parties late last year and promised to give his advice on the way forward.

Muhangi was found dead in his bed at his residence in Buziga-Munyonyo, Kampala East, on December 6, 2018 before meeting the President again to get his final decision.

The group, led by Magidu Lubengo Sseggane, the in charge security for Horizon Coaches owned by the late Muhangi, rejected the Police letter and refused to leave. 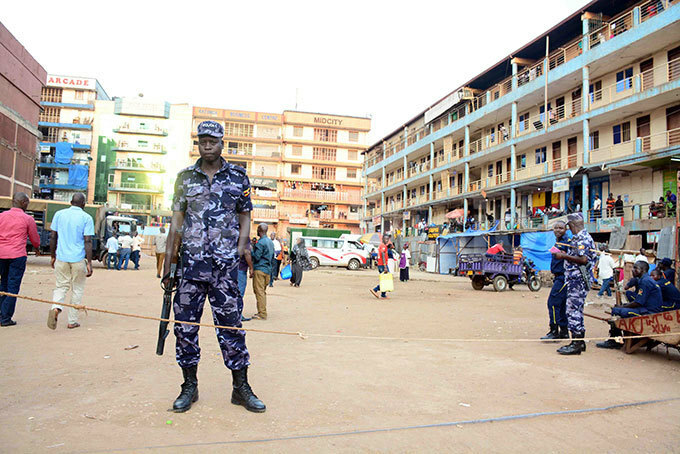 They too strategically positioned their security guards and musclemen at the terminal and around the building, causing tension and fear amongst over 500 traders operating on the premises, which had been renamed Bazanya-Nengo and Horizon City Building by Muhangi.

Sseggane had also attempted to order his men to repulse GKO security guards, hired by Lubega who were invited by the police commanders to be on standby to reinforce security.

Sseggane they would only leave if it was a court order, not what he called a ‘mere letter'.

The letter, dated February 19, 2019 instructs the commander, KMP to ensure that possession of the premises reverts to Lubega and advised that any aggrieved party should seek court redress.  It was copied to the Attorney General, his deputy and lawyers of the two parties.

Headed, ‘Clarification on the status quo of former Buganda Bus Park Plot 50 to 52 Nakivubo Road', the letter refers to an earlier letter dated January 26, 2019 and points to a meeting held in the Attorney General's office on the same day, which discussed a petition from the Speaker of Parliament, dated January 23,2019 on the matter.

"In this meeting, the status of the matter has been re-emphasized as the position stated in the letter dated 23 January 2019 addressed to the IGP and signed by the deputy attorney general".

It adds, "In this letter, it was clarified that the position remains, the clarification earlier communicated in the opinions of successive Attorney Generals and deputy Attorney Generals dated 20/2/2014, 15/12/2014 and 21/07/2017 respectively".

According to Twaruhukwa, the purpose of the communication was to relay the ‘final position of the matter which is that Mr. Francis Lubega should be in possession of the premises in question as the matter of ownership awaits court's adjudication'.