The stones, are mainly on high demand in cement factories in Tororo.

Miners gather around a quarry on the slopes of Mt. Moroto Photos by Eddie Ssejjoba

The stones, are mainly on high demand in cement factories in Tororo.

MOROTO- For several years, Mount Moroto, located a few kilometres from Moroto town, the biggest town in Karamoja region in Eastern Uganda, has been an attraction site that entices many visitors to try climbing.

To the locals however, apart from a few coins from taking tourists around, many never found much value out of this mountain, apart from grazing animals on the slopes and collecting firewood. Others engage in charcoal burning and cultivation.

Until recently, families, young and old have started benefitting from the new ‘blessings' of Mt. Moroto. 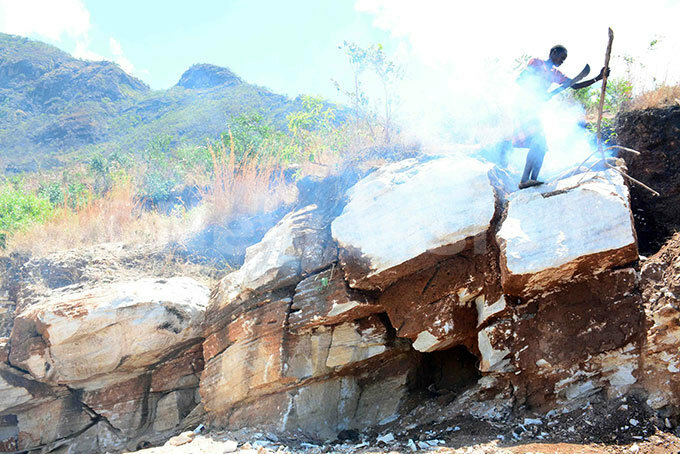 A miner making fire around a rock to make it soft

Many are now engaged in mining marble stones, the main mineral deposit in the district. The stones, are mainly on high demand in cement factories in Tororo. Because of its increasing demand, strong men come from as far as Mbale and Tororo to engage in breaking and selling the stones in raw form.

Men, women and school children descend on the slopes of the mountain and are engaged in breaking huge stones all day long. They use simple handy tools like claw hammers but many times it takes days before one can break a huge rock.

The women mostly go cutting logs of trees from the steep slopes, which are used to make fire around the rocks, which softens them to let them get the desired sizes.

The huge parts are collected and heaped in one place, from where small trucks, hired by middlemen collect them in one location and load them onto trailers that transport them to Tororo.

The locals however have little information of what is extracted from the stones and the actual value of the stones on the open market.

Thirteen-year old Patrick Olemu, a Primary Five pupil of Lia Primary School works with his brother, Jacob Aleper (19) who sat his Primary Leaving Exams last year. They both work at the stone quarry with their mother, Joyce Lamongin Nabok and elder sister.

The pupils say they work on the quarry to get money to buy scholastic materials and to get pocket money.

Nabok however complained that middlemen cheat them by constantly slashing the prices without notice and delay to pay. She said they used to sell a truck of raw stones at sh120,000 but the middlemen have been reducing the figure and now they buy it at sh80,000.

She said the buyers come and load trucks without informing them that they do not have money and drive away, sometimes taking three months without paying, claiming that they have to wait for the final buyers to pay them.

As a result, she said, they work without eating and some of them get sick due to fatigue and poor feeding. According to Nabok, sometimes her workers vomit blood and can only feed them on local brew popularly known as ‘kwete' as a drug.

She said the municipal authorities levy money from the trucks that collect stones but they do not remit any funds to the people who toil to break the stones, who she said get meagre revenue from the trade.

Others have been demanding for weighbridges to enable them establish the exact weight of each truck instead of using eyes to consider whether it is full or not.

Sulaiman Wabudeya, another stone crusher who came from Mbale and has been doing the business for now a year. He says he sells a truck of stones between sh80, 000 and sh90, 000. He however said the job was energy draining and many times he gets tired and rests for days.

He however said he has been able to make a living and look after his family.

Christopher Odyambo, a guide who came from Tororo said Mount Moroto was a hiding den for cattle rustlers. He said many who went out to Teso and other places would steal animals and drive them on top of the mountain, where it would be difficult for owners to follow them.

Some of them, he said are now engaged in cultivation and livestock keeping since cattle rustling was stopped by government.