UNRA hands over 3 bridges in Arua

UNRA Officials, leaders and locals in Ogoko during the hand over of Gazi bridge along Ogoko Rhino-Camp road (Photo by Robert Ariaka)

Engineer William Amanya, the UNRA project manager for the 3 bridges said, the contractor will handle the projects jointly. All the bridges will cost a lump sum amount of 29.5b.

The first bridge in Acha 3kms from Rhino Camp town board broke down a month ago after a heavy truck over turned with maize grains cutting off the people of Ogoko from accessing their colleagues in Rhino Camp. 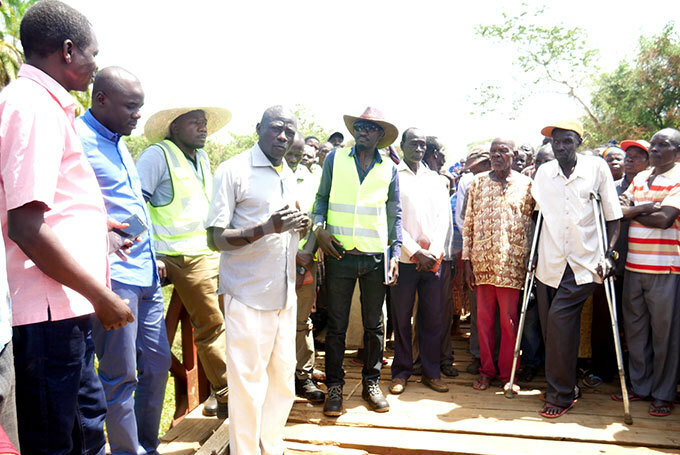 The truck was transporting maize grains to Rhino Camp refugee settlement when the weight over powered the bridge.

Acha Bridge was constructed in 1953 and has lasted for 66 years with rotten wooden surface that become a risk for the community and other road users.

The route has mainly been used by cotton and Simsim farmers, but from 2016 because of the refugee presence, the road from Packwach to Obongi via Rhino Camp is largely used by vehicles working with UN agencies to access refugee settlement to supply of goods and services.

Engineer Amanya said the contractor is expected to construct a modern standard bridge that will last for 120 years. The contractor will in the first 6months work on the design of the bridges for approval by UNRA before starting work.

Permission was granted to the contractor to put an alternative bridge for the people to keep crossing to access the markets, sub counties and refugee settlements.

Umar Diku, the NRM chairperson for Ogoko sub county appealed to the contractor to ensure a standard bridge is constructed and avoid instances of corruption that attract shoddy work.

Diku emphasised on value for money in the bridges construction. He also warned that, the design of the bridges should not be changed to compromise quality of work.

Genesis Acema, the LC5 vice chairperson Arua district challenged the people to make use of the short employment opportunities that will come along with the construction of the bridge and ensure they learn skills from the project.

Acema made emphasis on quality work and accountability for the money released for the projects. He requested the contractor to employ the local labour force and ensure those that need technical skills be hired for easy progress of  work.

Ismail Ogama Ali, the MP for Lower Madi County faulted UN agencies for damaging the roads and bridges in his county but they have little contribution in maintaining the roads that lead to the refugee settlement.

The legislator notes that, some community access roads are in terrible condition and need to be maintained by the district roads sector.

Nackson Adaku, the LC3 chairperson for Vurra sub county where Alaa bridge is located connecting Odianyadri to Logiri said the particular bridge led to the death of over 20 people who perished in a motor accident.

The bridge has become dilapidated and weak risking lives of motorists and pedestrians mostly at night.

Micah Omalla, the project engineer for the contractor promised to deliver quality work in the three years period scheduled for the bridges and work with the support of the local community members and leaders for smooth work.

All the three bridges will have a 1km tarmac on both sides to protect them from stains that will destroy the bridge.