Somalia army to take over military trainin...
Next Story

Anti-riot Police and UPDF soldiers were deployed to codon off the venue in order to deter any one from going ahead with organising the rally.

Anti-riot Police and UPDF soldiers were deployed to codon off the venue in order to deter any one from going ahead with organising the rally.

PIC: DP President Nobert Mao (middle) in a procession in Jinja town before Police fired teargas to disperse them.   Photo by Donald Kiirya.
DP RE-UNION
JINJA-The Police and the army have foiled a Democratic Party (DP) dubbed Re-Union political rally that was slated to take place Wednesday  at the Jinja Rugby ground.
Anti-riot Police and UPDF soldiers were deployed to codon off the venue in order to deter any one from going  ahead with organising the rally.
DP President Nobert Mao arrived at the venue at about 8:00am and was questioned by Jinja DPC Vincent Irama who he found at the venue, as to why he had come. Mao replied that he had come to join his colleagues in the struggle at the Re-Union rally but was told to go away and when he rebuffed, Police officers forcefully arrested and bundled him into a private vehicle with  two of his supporters and taken to to Jinja Police Station for further Interrogation.
Several DP supporters gathered at the Police station demanding for the release of their President and other supporters. While at Police, the Kiira region Police Commander Paul Nkore, Jinja DPC Vincent Irama and officials from other security agencies engaged Mao and other DP leaders in a meeting and agreed on a few terms.
Before Mao walking out of the Police Station, Police fired teargas along Main street to disperse DP supporters who were gathered outside the Jinja Central Police Station.
When Mao walked out, he told Journalists that they agreed with Police to hold a Press Conference at Space café after Police foiling their Re-Union rally at Jinja Rugby ground.
Mao majestically walked with his supporters as he lifted his stick towards Space Café at Lubas road but unfortunately as they walked along Iganga road while chanting and singing DP songs, Police arrived and blocked them from proceeding saying they were in a procession which was not among the agreed terms.
RPC Nkore was seen exchanging bitter words with Mao and  at some point he tried to push him backwards trying to restrain him from proceeding with the procession.
Meanwhile as all this was going on, DP and People Power supporters were singing and chanting songs.
Police Officers led by Jinja's Officer in Charge of Operations led by Pius Asiimwe, led Mao and his supporters from Iganga road through Trans Africa building to Space Café on Lubas road, the venue of the Press Conference.
While at Lubas road, anti-riot Policemen fired teargas at DP supporters to disperse them as UPDF soldiers were seen whipping others with sticks.
In the Press Conference, Mao showed Journalists letters they wrote to the Inspector General of Police, Martin Okoth Ochola seeking for permission to stage the Re-Union rally but there was no response from Police.
He condemened Police for obstructing a lawful meeting despite reaching out to top officers at Police headquarters in Naguru adding that they will go back and meet with the IGP at the Police headquarters to demand for their rights.
"This was our fifth Re-Union gathering after successfully organising others in Kampala, Mukono, Gulu and in Western Uganda," Mao said.
Mao further said that Police officers are sticks being used to beat them and the person wielding them (sticks) is President Museveni not knowing that the Oppressed are bigger than the Oppressors and boasted of having numbers to defeat President Museveni in 2021 general elections. 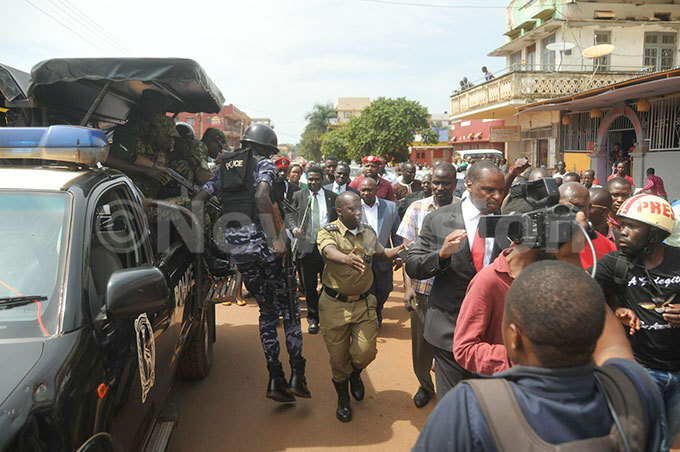 Police officers battling with DP supporters who were in a procession with their President Nobert Mao (middle with stick) as they were heading to Space Cafe to address Journalists on Wednesday. Photo by Donald Kiirya.
Mao was accompanied by DP stalwarts Lulume Bayiga, Mukasa Mbidde, SDP's Micheal Mabikke, Dr. Abed Bwanika and Gerald Siranda DP's secretary general.
Abed Bwanika condemned the conduct of Police adding that it will not deter Political parties in the Re-Union from fighting for the freedom and liberation of the Country.
As the Press Conference went past the time Police had earlier agreed upon, RPC Nkore and Jinja DPC Irama confronted Mao to stop the meeting and move out of the venue which they agreed to.
While outside Space café, the RPC sprayed teargas to Mao and his supporters who were still gathered and singing People Power songs like ‘Tuliyambala Engule.'
A one Moses Katabo was sprayed directly in his eyes affecting his sight. He was rushed to hospital.
Mao jumped into his Prado vehicle namba UAM 433D that drove off towards Kampala as Police patrol pick up vehicles followed him.
The Kiira region Police Commander, Paul Nkore said they had orders from above not to permit any Political rally or gathering organised at Jinja rugby ground.
Nkore said Mao and his team did not follow the procedures and guidelines of the Public Order Management Act 2013.
"Yes, we are aware they wrote to Police, but they were not permitted at Police headquarters so they have to go back at Police headquarters and seek permission," Nkore said