The three-year, sh50m partnership will start with the joint promotion of the Uganda Open Tour.

The three-year, sh50m partnership will start with the joint promotion of the Uganda Open Tour.

The Uganda Golf Union (UGU) and the Uganda Tourism Board (UTB) have entered a partnership to position Uganda as Africa's premier golf tourism destination.
The three-year, sh50m partnership will start with the joint promotion of the Uganda Open Tour; which will be launched at the Lake Victoria Serena golf course on March 30, before traversing the whole country.
The tour will be played over six months as a build up to the annual Uganda Open to be held in September.
Outgoing UTB CEO Stephen Asiimwe and Marketing Manager Claire Mugabi signed the deal with UGU president Innocent Kihika and Secretary Paul Baite at the Uganda Golf Club yesterday.
Asiimwe said they were going to highlight the different destinations before the tournaments and give highlights of what the players are going to see to give golfers an experience beyond the golf club.
"Uganda is uniquely placed for both the local and international golfer because every golfing town is within the vicinity of an experience. This means that every golfer in Uganda or golfer coming into Uganda stands a prospect to experience the surrounding tourists' attractions," Asiimwe noted before emphasizing that the partnership is meant to boost the sport and also create an environment for a good game. 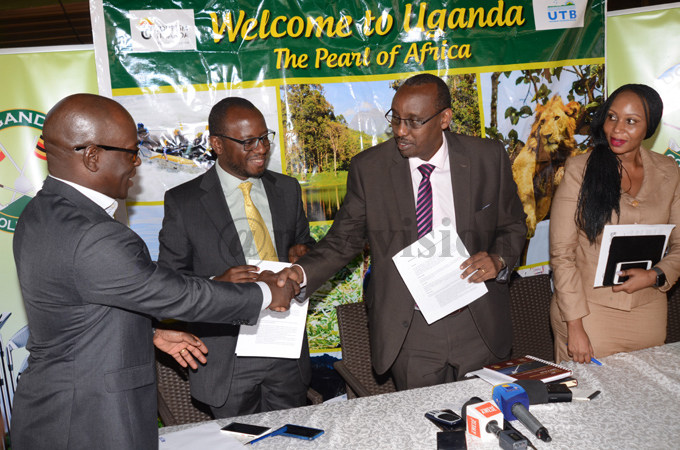 He said they were going to offer packages so that the golfers are not only tied to the game but they can travel before or after and have the experience. UTB will also work with hoteliers so that golfers can get rebated rates for accommodation and other facilities, incentives and give some value preposition to the whole tournament
Kihika said golf was more than a sport but an experience beyond the golf course with an element of tourism because when golfers move around they don't only play, but lodge, eat and travel and with this, now get a chance to explore the countryside.
"The Uganda Open promotes tourism in two-fold; by attracting foreign players to Uganda. In the main event over 25 percent of the players come from Kenya and other countries so we decided to transform this into domestic tourism and we created the Uganda Open tour, with the purpose of encouraging local golfers to go around the country as the event is being promoted and basically to support the local golf clubs," Kihika stated.
He said part of the money will go directly in supporting the golf clubs as UTB also helps with the financial logistics of the competitions.

My favourite box of tricks