A mobile app to measure the tobacco control law's implementation and compliance has been launched by the Ministry of Health, World Health Organisation (WHO) and the Centre for Tobacco Control in Africa (CTCA).

Speaking at the launch of the app which researchers called Tobacco Spotter at Makerere University School of Public Health in Kampala last week, Dr Hafsa Lukwata, the National Tobacco Control focal person, said the health sector is taking stock on how the Tobacco Control Act 2015 is being implemented.

Lukwata said the app will generate data for the stakeholders' needs to win the war of tobacco consumption, which she termed as dangerous to human life and has led to the increase in non-communicable diseases (NCD) including cancer that is killing Ugandans.

"If snakes are fearing tobacco, then why not us human beings? Tobacco is deadly in every form. It is killing over eight million globally, contributes to over one million deaths due to second-hand smoke exposure," she said.

The law also seeks to protect the environment from the effects of tobacco production and consumption and exposure to tobacco smoke, promote the health of persons and reduce tobacco related illness and deaths. 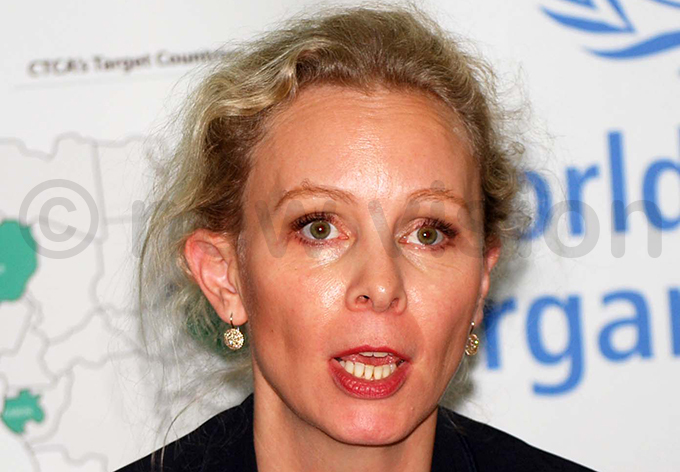 WHO's Kerstin Schotte delivers her remarks during the launch. Photo by Lawrence Mulondo

Dr Kerstin Schotte from WHO said 10,600 people are killed in Uganda every year by tobacco consumption and called for the strong implementation of the law to save Ugandans.

"This is a high number of people who are dying of something that we can control, the law should be implemented to 100 per cent to avoid such unnecessary deaths," she said.

Dr Yonas Tegegn, the WHO representative to Uganda, said Tobacco use remains the biggest contributor to premature death due to NCDs especially in developing countries.

Tegegn said the implementation of tobacco control measures in the WHO Framework Convention of Tobacco Control is the only way to reverse the tobacco epidemic.

However, many countries in Africa are yet to comprehensively adopt laws and policies that will protect their citizens from the health, economic and social effects of tobacco use.

"The Global Tobacco Epidemic Report of 2017 indicates that although tobacco use is on the decline in many parts of the world, there is an upward trend in Africa and the Eastern Mediterranean regions," he said.

According to the 2013 Global Adult Tobacco Survey, 7.9% of the Ugandan population used tobacco products; 5.8% are active tobacco smokers while 5.5% of adults in urban areas and 5.9% of adults in rural areas smoke tobacco.

"Yet only 6 in 10 current smokers were thinking about quitting the harmful habit, leaving it entrenched in a big portion of the population. 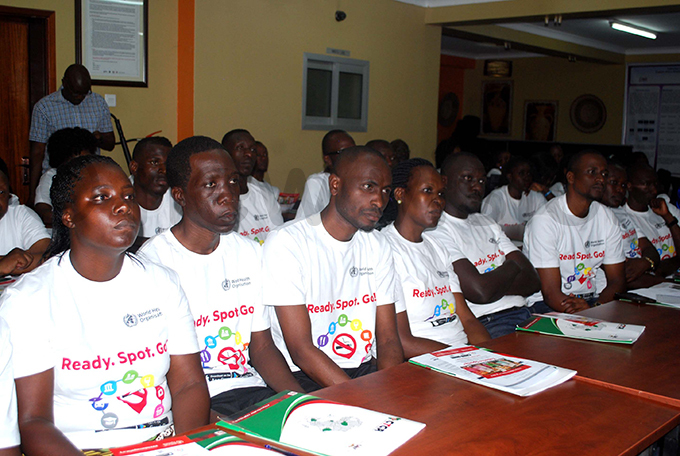 A cross-section of the people that were trained in data collection and the application's usage. Photo by Lawrence Mulondo

However, Dr Jim Arinaitwe, the manager for the Centre for Tobacco Control in Africa said the problem has been cited with enforcement and compliance with this law.

"Public smoking of tobacco and shisha is still prevalent in many places especially bars and nightclubs. In other words, the tobacco control law has not taken full effect in the country. There is still the absence of consistent enforcement actions to promote compliance with the law and the need for a systematic framework for enforcement operations," he said.

He said the compliance study will, therefore, be important as it will shed some light and suggest solutions to some of the challenges the tobacco control law has encountered.

"This study should help monitor and evaluate the progress of the effective implementation of the Act and strengthen its legal regime," he said.