Kiplimo races away from Cheptegei to win the National Cross Country in Tororo. Photo By Richard Sanya

Should Kiplimo, who in 2017 became the first Ugandan to win the world cross country, also triumph at senior level in the global meet next month, then he will join that rare club of runners like Ethiopia's Kenenisa Bekele who have won both at junior and senior level.

There was little to show that the Arua Athletics Club runner had just upgraded to senior level as he blazed through to the lead.

Then in an epic show determination and tactical running, the teenager raced away more seasoned Cheptegei in the final lap to win his first senior national title.

Running in hot conditions on the Tororo Golf Club, Kiplimo and Cheptegei showed early the gulf between them and the rest of the field. 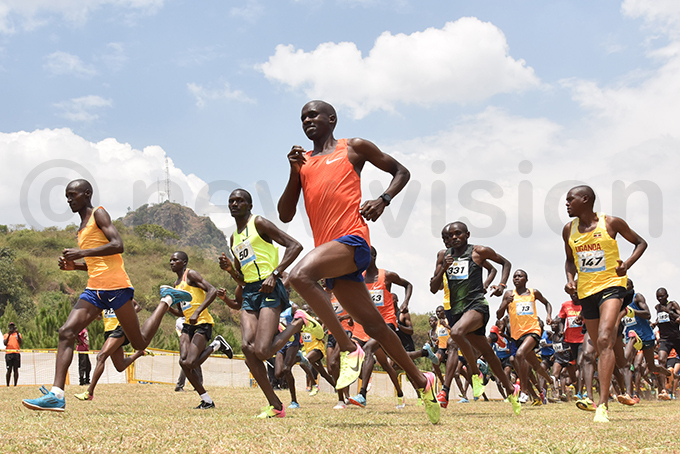 With two laps to go, they were all alone and it was clear then that the race would go down to which of the two stars would produce a better final sprint.

Kiplimo took the day with a repeat of his world winning run as junior at Kololo in 2017. He raced away from the much taller Cheptegei in the final kilometre to victory.

"I prepared well and was confident of a good result. Now my eyes are on the world cross country," stated Kiplimo after the 10-kilometre victory.

Top four finishers in the senior and junior races together with the best six in both the two-kilometre races will form Uganda's squad for March 30 world meet on March 30.

The squad will have residential training in Bukwo starting on a date that will be announced soon.

The national event returned to Tororo after 22 years. The 1997 cross country is best remembered for the arrival of Dorcus Inzikuru as she easily won the juniors' race on the same course.

At Kololo Kiplimo, then a junior won Uganda's first world cross country title- a feat he believes he can also pull off at senior level.

That would thrust Kiplimo as the first Ugandan to also win the world senior title.

Moses Kipsiro is the most successful Ugandan senior after getting silver at the 2009 edition in Jordan.

Kiplimo has been enjoying good form that prior to Saturday's victory had him going five races in the IAAF Challenge unbeaten.

That one of these in Portugal had him beating double Commonwealth champion Cheptegei, was a confidence boost for Kiplimo well before the two stars lined up for battle in Tororo.

Congo based Rwandan FDLR rebels ready to surrender to UN