The deputy director CMI Brig. Henry Isoke intervenes and stops the chairperson of the Madi Community in Zoka C, Joshua Adibaku (right) after he had ignored his warning to stop addressing the crowd. PHOTO: Eddie Ssejjoba
With visible anger and frustration, a Uganda People's Defense Forces (UPDF) senior officer has publically warned the chairperson of the Madi Community living in the disputed Zoka C land in Adjumani district against fuelling disharmony, inciting violence and peddling in falsehoods against security officers in the area.
Zoka C area, the main conflict area stretches between Rivers Zoka and Gorobi in Iterekwa sub county in Adjumani district.
The land, formerly located in Amuru district and occupied by the Acholi tribal group now falls in Adjumani district, predominantly, a Madi area.  After the ministry of local government pronounced the new boundary, the Madi tried to drive out the Acholis, attacked their community, burnt down houses and took over gardens, which has forced the Acholis to stay in an Internally Displaced People's camp (IDP), guarded by UPDF and the police.
During a meeting with the Madi on Thursday, the deputy director of the Chieftaincy of Military Intelligence, Brig. Henry Isoke warned the chairperson of the group, Joshua Adibaku, accusing him of being one of the people driving the conflict in the area.
He stated that Adibaku was involved in blackmailing UPDF commanders and Police officers deployed in the area to deal with the conflict, which has claimed over 21 people and left several others with injuries.
"I have a file in my office against you, I am in a position to direct action against you, your name is not clean and if there were any people to pounce on, you will be one of them," he stated.
Brig. Isoke was responding to accusations by Adibaku during the meeting that the UPDF commanding officer of the 63rd Battalion, Lt. Col. Francis Odritot, where the Zoka C disputed land lies that he was biased and had involved himself in trying to distribute land to the Acholis.
Speaking through an interpreter, Adibaku questioned the mandate and powers of the commander to allocate land to anyone in the area and asked his bosses to take action against him. 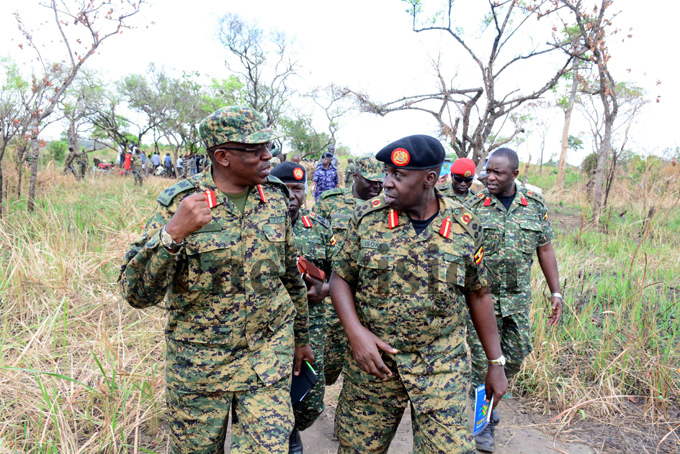 He also lashed out to the District Police Commander ASP Ahmed Kimera, accusing him of taking sides and receiving directives from Christopher Ojera, an opinion leader of the Acholi group against the Madi people.
Adibaku shocked the security officers when he questioned the existence of the IDP camp in the area, which accommodates over 2,000 Acholis, saying they were unknown people ferried in the area by Ojera. He said for peace to prevail, the group must not be allowed to camp in the place.
Another member, Justine Kotevu Dradru, who claimed to be a son of a clan chief also blamed the UPDF and the police for having taken time to intervene in the matter, saying his clan chief was installed in the area in 1911 and only moved away during an outbreak of sleeping sickness.
He sang some songs to prove they were the original owners of the land and said it was customary land for which he had the final powers.  He threatened that they were about to perform cultural charms and warned that they should not be blamed for any outcome.
He warned security agencies not to intervene after they have performed their charms, saying they too would be affected.
"We are tired of this Zoka C conflict, we are going to perform our cultural charms and whoever gets a problem should not blame us," he declared.
The meeting was attended by the area LC3 chairman, Jesus Eranya, deputy Division Commander 4th Division, Gulu Brig. Ronald Bigirwa, UPDF spokesman Brig. Richard Karemire, deputy director of operations Uganda Police Force, Senior Commissioner of Police John Nuwagira, director of intelligence of UPDF land forces Col. Paul Muwonge, UPDF/Uganda Wildlife attaché Col. Allan Kyangungu, police spokesman Fred Enanga, the Battalion Commander, Col. Francis Odikiro and several other senior officers.
Brig. Isoke hit back at the accusations, saying Adibaku was overlooking security personnel and even when he personally asked him to stop addressing the crowd, he ignored and went ahead talking until he rose up to stop him.
He stated that after directives from President Yoweri Museveni to deploy in the area, the UPDF sought for best and zeroed on Lt. Col. Odritot, who he described as one of the finest and disciplined army officers, who he said was hardly a week in the area.
"I cannot take that accusation, that our officer who was deployed here in a week he can get involved in selling land, it could have been elsewhere but not in this area, moreover where he is new," he said.
"You must be reminded that giving false information to security personnel is a crime, you are the people driving this conflict," he stated.
The Police team leader, Senior Commissioner Nuwagira rose up and pointed at Adibaku that he had been mentioned as the main actor in the conflict, who he said had been playing between political leaders and on several occasions orders for the arrest of people from the Acholi community on trumped-up charges.
The security team earlier on met the Acholi group and listened to their complaints after which they walked through the ‘red tape' stretch, about 300meters from the camp to the Madi frontline area. Most of the victims, according to residents, have been killed while trying to cross the stretch.
Brig. Isoke asked leaders from top to bottom to preach peace and unity and warned against mobilizing people on tribal and ethnic grounds.
"We shall not tolerate anybody who tries to harass another on grounds of tribe or religion, every Ugandan is free to live anywhere as long as abides by the laws of our country," he stated.

MUBS&#8200;links up with US business university