ADJUMANI-In a new twist, security authorities in Adjumani district have decided to lockout political leaders in the ongoing negotiations and quests to find a permanent and lasting solution to the land conflict in Apaa area, which have involved long-running battles between the Madi and Acholi communities.

Several people in the past have lost lives and scores sustained injuries in occasional clashes between the two communities that have led to destruction of property and displacement of mainly children and women.

The Adjumani Resident District Commissioner, Peter Data Taban said after a two-hour security meeting at his office in Adjumani town on Wednesday there were clear indications that political leaders were fuelling the conflict over the disputed 40-square kilometer land in Apaa.

Accoding to him, demarcations between Amuru and Adjumani districts were clear and known since the map of Uganda was drawn during the colonial days but stated that the current scramble over the boundary was being ignited by political leaders, who he wants to step aside in the ongoing negotiations.

He mentioned the Kilak County Member of Parliament, Gilbert Olanya as one of the leaders trying to create a new boundary with intentions of expanding his constituency and causing issues. 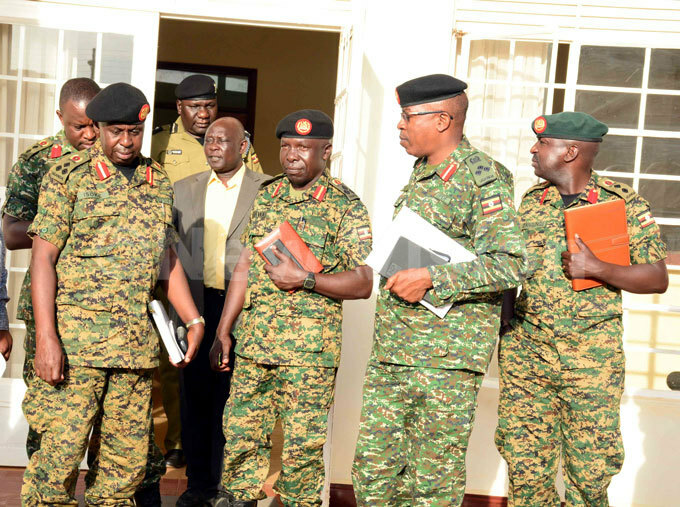 "I recently went on ground and uprooted marks he had planted in what he called new demarcations. The Madi and Acholis would be okay but they have been influenced by such politicians," he told journalists.

The RDC spoke on behalf of the two teams that had a closed-door meeting at his office. They involved one team from Kampala led by the deputy director of Military Intelligence, Brig. Henry Isoke and included the army spokesman, Brig. Richard Karemire and police publicist, Fred Enanga. The Adjumani team included members of the district security committee.

In August last year, President Yoweri Museveni had a meeting with leaders in Gulu and commented that the border issues between the two districts had been complicated by bad politics in the country.

According to Taban, security has been tightened on the ground in the recent days to calm the situation after new fears of possible fighting and clashes between the Madi and Acholis.

He said a battalion (of about 728 personnel) had been deployed in the area mainly from the 63rd Battalion in Bondo, Arua district and camped in Zoka Central and in Apaa border points.

The security personnel working with other sister security agencies including the Police, criminal investigations and military intelligence have been moving on the ground, engaging ordinary people with a view of coming up with a lasting solution to the conflict.

According to the RDC, the teams have met and interacted with the Madi and Acholis separately and were now planning to have a joint meeting of the two communities.

He said the Office of Prime Minister had also brought in relief food, which he said arrived on Wednesday and would be distributed to the over 65 families, which add up to 560 individuals who have been displaced by the conflict.

"We now want to pass a message to the politicians, step aside and avoid causing trouble, the boundaries are already fixed and people have been living in peace, we want to maintain this peace and nothing else," he stated.

Accordingly, the ongoing assessment and consultations are meant to give a final decision to be taken on other issues including people who settled in the forest reserve and natural forest.

Brig Karemire said the team from Kampala was in Adjumani to assess the situation and establish whether the security deployments have been effective in ensuring there is calm in the area.

He said the deployments started last week after the Chief of Defence Forces, Gen. David Muhoozi ordered a battalion to occupy the area to handle the fragile security situation.

He said according to reports from the district security committee, the situation was calm.

"As security forces we shall do whatever it takes to ensure life and property is safe, we are therefore here to make an assessment and after we shall make a report to the Prime Minister for a long-lasting solution," he said.

He called on leaders mentioned in fuelling the conflict to consult and give their views with a purpose of finding a lasting solution to the conflict.

'NBA to issue guidelines around June 1 on recalling players'