Lukwago writes to COCASE over Greenland Ba...
Next Story

Students of Computer Science waiting for a lecturer on Tuesday. Photo by Timothy Murungi

Students at Makerere University have demanded that management extends the current semester, seeing as it is a promotional one.

The students who reported on January 19, have for the past four weeks been wandering about the university premises with some attending few or no lectures at all.

"We are spending a lot of money coming for lectures but some lecturers have not turned up. So management should think of compensating us by extending the semester," said Simon Mugabi, a Bachelors of Science in Education student.

Derrick Kamanzi, a third-year Social Work and Social Administration student said, this being a promotional semester, it requires triple the efforts to ensure students achieve the required grades.

"If lecturers do not compensate us, we shall be burdened with a lot of work that we will not be able to digest in a short period of time," Kamanzi noted.

A section of presidents from various colleges and the School of Law on Tuesday held an impromptu press conference to discuss their dilemma.

"We are not interested in finding out who is right or wrong. What we want is for management and lecturers to find a way of sorting their issues amicably, for our sake," said Moses Kidega, the president of the College of Computing and Information Sciences.

Kenneth Kiapi, the Makerere Law Society president said whereas law students agree with the illegalities highlighted by the law school board, the university should resolve the issues at hand and negotiate for a win-win situation.

"This final semester requires us to finish on time to ensure that our results are released quickly to enable us prepare for the Law Development Centre entry exams," said Kiapi, a law student in his final year. 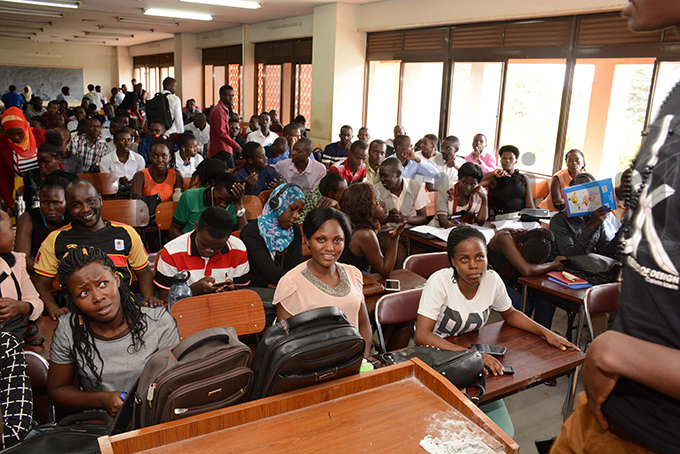 Students of Science in Education at the College of Natural Science waiting for a lecturer at Makerere University on Tuesday. Photo by Timothy Murungi

When contacted, Dr Muhammad Kiggundu, the acting manager communications and international relations at the university said the decision to extend the semester for the benefit of the students, will be considered.

He, however, said management had by press time convened to discuss the status quo.

The suspended leaders include; MUASA chairperson Dr Deus Kamunyu Muhwezi, as well as Bennet Magara and Joseph Kalema of MASA.

The administration argues that they were suspended for misconduct, indiscipline and involvement in acts that breach the terms and conditions of their employment.

However, a big section of the academic and administrative staff at the university has rejected calls by management asking them to return to work, demanding that the suspended leaders first be reinstated.

Mood at the university

Whereas the joint staff associations resolved to maintain their strike on Monday, some of the lecturers and administrators defied the resolution and reported to their workstations.

The College of Health Sciences, however, conducted full lectures, saying they have never been part of the strike.

Students who spoke to New Vision, however, observed that lecturers who turned up to the classroom did not spend more than 30 minutes in the classes.

Tobias Mutungi the speaker of CEES said one of the lecturers who turned up to teach, only introduced the course outline and left thereafter.

A group of first-year students also from CEES, who resorted to holding discussions, hit a dead end because they failed to understand the contents of their course outline.

Fisherman survives being mauled by crocodile

Fisherman survives being mauled by crocodile