If you are a Muganda Muslim female, you are most likely to have a password on your phone. Your husband doesn’t know it and doesn’t believe in sharing passwords. So he doesn’t know yours.

If you are a Muganda Muslim female, you are most likely to have a password on your phone. Your husband doesn’t know it and doesn’t believe in sharing passwords. So he doesn’t know yours.

As a Valentine's Day project, Vision Group commissioned a survey on phone passwords in relationships. The online survey spanned the whole of January and reached 317 respondents. Hilary Bainemigisha brings you the results

Two sure things this Valentine's Day: One is it is next week on Thursday. And two, there will be couples who will clash on that lovers' day because of the phone. There is nothing wrong with the phone; it may be the etiquette of the user, the preference or the password. 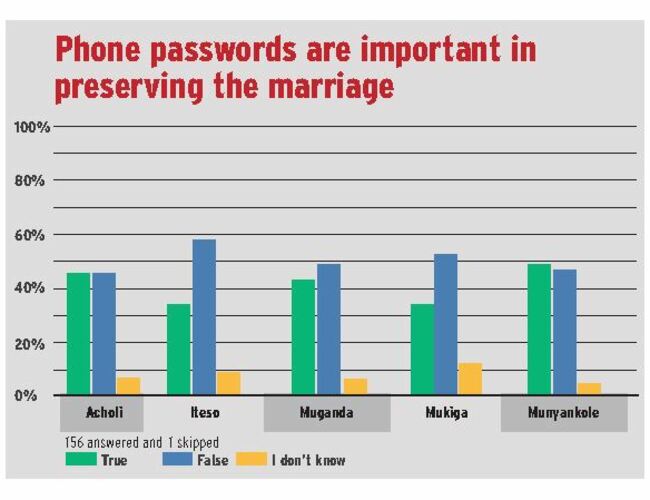 Yes, the password. It is highly likely that for some of the couples who will fight on Valentines' Day, it will be because of the phone password or lack of it.

For behind the password, there are usually skeletons of double lives, infidelity and secret financial transactions. Those photos, text messages, emails, WhatsApp discussions, Twitter posts and a call history can let the infidelity cat out of the bag. 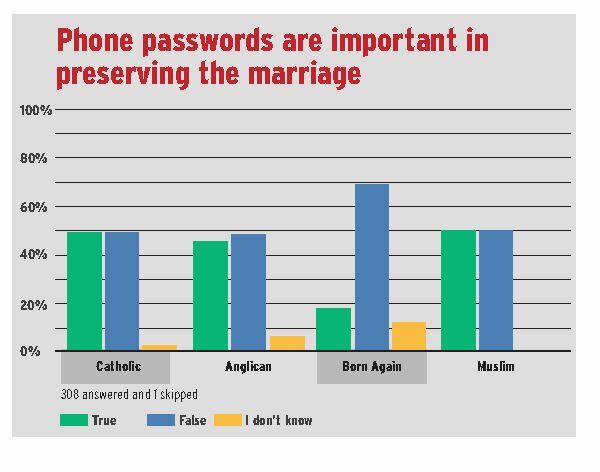 In Uganda, there are four types of password couples. The first group shares passwords or have none on their phones. The second group has passwords neither knows and so no access to the other's phone.

The third group thinks it is like the second but one of the partners stole the password and has access that the other doesn't know. The fourth group doesn't have passwords but wish they did, can pay lots of money to have access and live a snooping life hoping to, one day get the password and a peep into the partner's secret life. 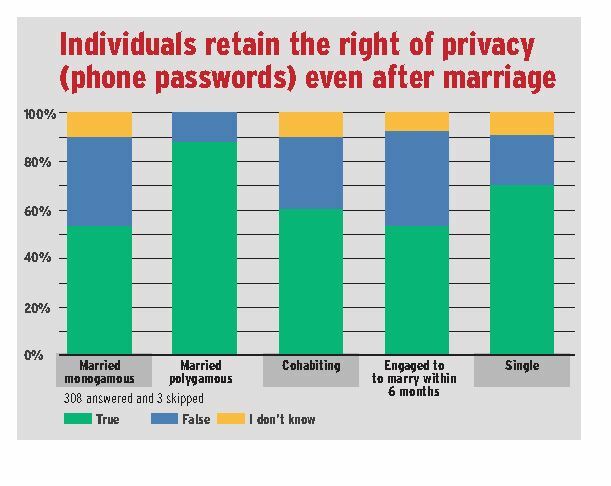 The survey
The respondents included 176 males and 136 females (5 people did not say their gender) They were between the ages of 25-64 with the majority (47.9%) between 25 and 34. Married people were 68.1%, the majority describing their marriages as monogamous.

4.2% said they were in polygamous marriages, 19% were cohabiting, 32.1% were not married but had relationships where passwords are an issue. 22.2 said they were single but seeing someone, 7.4% were engaged to marry within six months, 2% were divorced and 0.5% were widows and widowers. The majority, 86 respondents, were Anglican, 82 were Catholics, 59 Born Again, 22 Muslims and 12 Seventh Day Adventists. Four said they belonged to other religions not given as choice boxes in the quantitative survey.

Because of the nature of the survey; requiring internet and computer skills, the majority respondents were University degree holders (55.6%), with 20.8% more with post graduate degrees. There was no body who stopped at Primary school level and just a pantry 0.9% having stopped in Secondary School. 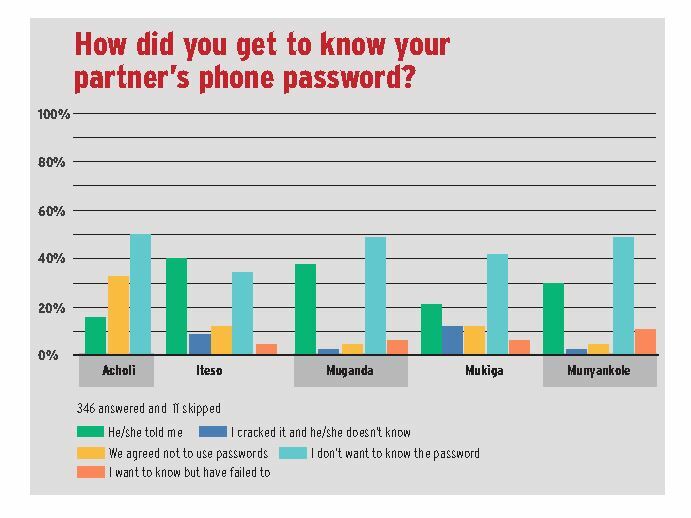 Thus the self-confessed style of gathering data can be considered well informed from respondents who were well educated, affluent enough to hold smart phones, in relationships and open enough without intimidation of imagined consequences. Beliefs on phone passwords
Majority of the respondents (54%) said they believed partners should share each other's passwords. 38% said passwords were important and 8% didn't know.

The statement: Only husbands should have access to the wife's phone, was rejected overwhelmingly at 84%. Yet there was an 11% who said yes. 5% didn't know.

Respondents were also asked to say Yes or No to the statement: Individuals retain the right of privacy (phone passwords) even after marriage. 60% said Yes and 31%, no. 9% said they were not sure.

On the statement: Phone passwords are important in preserving the marriage, 41% said True but 53% said False. 6% were not sure. 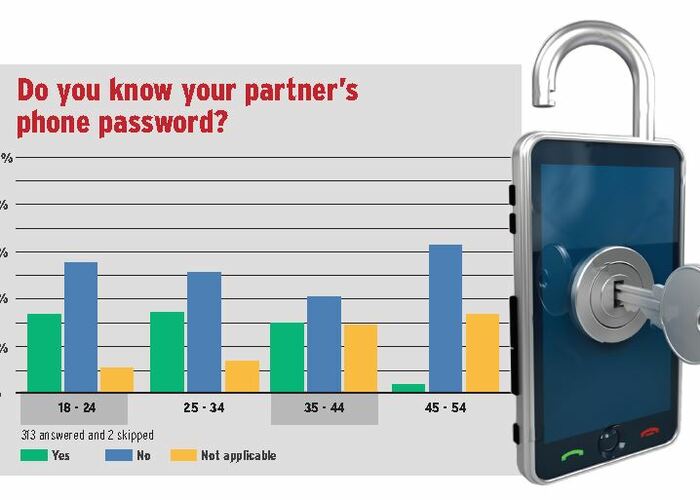 Data conclusions
If you are a Muganda Muslim female, you are most likely to have a password on your phone. Your husband doesn't know it and doesn't believe in sharing passwords. So he doesn't know yours.

And he refused to share his, but you cracked it and he doesn't know. And from what you discovered in his phone, you now believe passwords are important in preserving marriages.

If you are a Born Again Iteso male, you most likely have a password which your wife knows because you told her. You don't believe passwords are a danger to marriage and you strongly believe individuals lose the right of privacy after marriage.

If you are a Catholic Acholi woman, you don't want to know your husband's password (and you have never tried to crack it) because you believe individuals retain the right of privacy even after marriage.

If you are a Munyankore Anglican man, you don't know your wife's password and neither does she know yours. You agreed not to share, but you went ahead and cracked her password. But she keeps on changing it.

The above, however, is a lot of generalizing. The details are in the following survey questions. 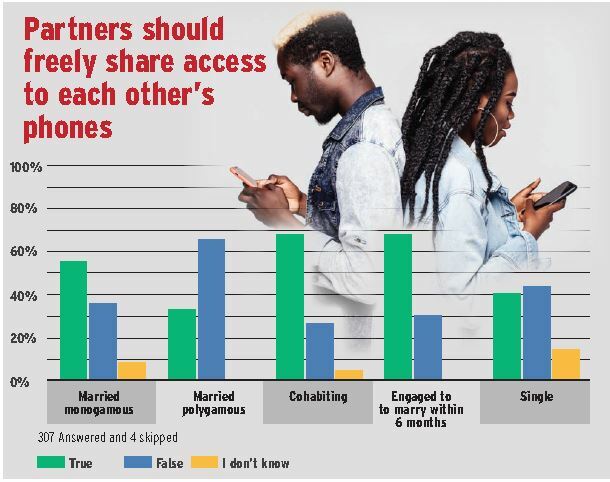 In terms of age groups, passwords are used more among the 25-34 bracket and least among the 35-44 age group. This age group easily shares passwords, an indication of more trust developing and less philandering.

However, the 25-34 age bracket topped the rest in sharing the passwords but also in stealing them. 50% of the 45-54 age group said they don't want to know the password.

Passwords are used more among cohabiting people (who try to steal them more) and less among those who are engaged to marry soon. The password is easily shared among the engaged, agreed not to be used among the monogamous and ignored among the polygamous.

Among the tribes, 83% Baganda said they use passwords, 77.8% said their partners use them, and 53.9% don't know their partners' codes. Of these, 47.1% don't want to know and 7.8% have been trying to steal the password without success.

Most Acholis agree not to use passwords and none said they have stolen them from the partner while most Banyankore want to steal the passwords but they are not succeeding.

Passwords were most common among Anglicans and least among Born Again Christians, who said they either agree not to have passwords or share them freely. 50% Muslims didn't know their partners' passwords, most have tried to steal them but of these, 22.3%, the highest on all cohorts, have failed to crack them. Most Catholics don't want to know the password but 7.9 say they have tried to steal it in vain.

Individuals retain the right of privacy (phone passwords) even after marriage
This question was accepted by all age groups especially 18-24 and above 45. All genders too, but more by women (64%) that men (57.6%). The polygamous overwhelmingly supported it at 88.9% as opposed to the monogamous at 53.7. Catholics, Anglicans and Muslims supported it while the Born Again rejected it at 48.9%.

However, according to experts, healthiest couples should value transparency over personal privacy. When a spouse operates in secrecy, it creates distrust, suspicion and disunity in the relationship.

And it goes against the very definition of marriage, which is oneness. Marriage is the only acceptable place where nakedness shouldn't cause embarrassment. And this cannot just be the nakedness of no clothes but of trust with nothing to hide from each other.

Phone passwords are important in preserving the marriage
This was the most controversial statement that required respondents to answer True or False. It was acceptable among singles (47.9%), cohabiting (48.8) and Polygamous (66.7%) respondents but the Monogamous (56.8%), the divorced (75%) and the engaged (75%), didn't agree.