MENU
Vipers looking to get back to winning ways
Previous Story

Magala bags another win in Nigeria as Bab...
Next Story

The drivers made the appeal after their colleague Jas Mangat was involved in an accident in the Mbarara rally.

The boda-boda cyclist and a truck on the rally route. PHOTOS: Johnson Were

The drivers made the appeal after their colleague Jas Mangat was involved in an accident in the Mbarara rally. 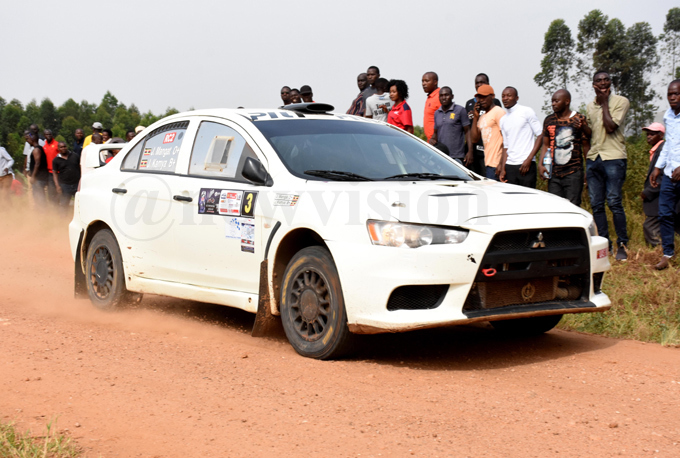 Jas Mangat powers his Evo 10 in the sixth section

"It is horrible to leave an event when you have injured any person or livestock. I think the organisers and federation must find solutions to such uncalled for accidents," Hassan Alwi noted.
"There must be at least three route openers before the first competitive car gets to the sections," Alwi said.
He urged drivers to team up and play a role in the improvement of safety.
"We went into the section without the route opener. I asked the organisers on the safety of the section and they okayed me. However, we slowed down and at the time of the incident, we were not powering because we knew we were in a comfortable lead," Mangat added.
He added that he had saved over four boda-boda cyclists who entered into the sections during the event.
He was supported by Dr.Ashraf Ahmed, Hassan Alwi and Christakis Fitidis who said they complained to the organisers of the safety hazards without a route opener because the roads had several feeder roads which were not closed.
The incident left Mangat terrified because it was the first time he was knocking dead a person.
Rwizi Region Traffic Police officer Justine Opus said they will take the car for inspection and also carry out further investigation to the incident.
Only 23 drivers out of the 31 that started the race, managed to finish with Mangat emerging winner after section 8, while Arthur Blick Jr., Alwi, Ronald Ssebuguzi finished second, third and fourth respectively.

Americans go to the polls

US elections unmasked the ugly side of democracy