The floors of the boys and girls toilets were covered with human faeces, producing a horrible smell unfit for human health.

The floors of the boys and girls toilets were covered with human faeces, producing a horrible smell unfit for human health.

HYGEINE   SANITATION
The Resident District Commissioner (RDC) of Lira, Milton Odongo  participated  in cleaning the pupils'  and staff toilet facility at Boke Primary school which had became a health risk.
Odongo with other district officials were on schools monitoring visit to get facts on how the  primary schools in the district are being managed.
After the team reached the school, it held a brief meeting with the school authorities. The team then toured the school,  when they reached the toilets; the team was welcomed  by a foul smell.
The floors of the boys and girls toilets were covered with human faeces, producing a horrible smell unfit for human health. 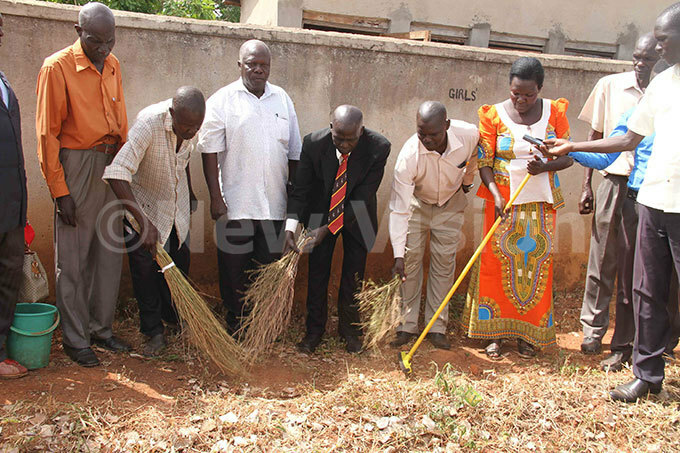 Lira RDC Milton Odongo (Center) launches school cleaning programme at Boke Primary School after he visited the school and found it with poor hygiene.
"Is this the nature of our teachers and the headship! How can you be smart looking yet where you answer nature's call is of poor hygiene?" Odongo wondered before he tasked the teachers to fetch jericans of water to clean both the pupils' and the staff toilets.
He further challenged the teachers to live by example, do the right thing and become role models.
"How can a child know that it's his or her responsibility to keep personal hygiene when you a teachers has failed to show them by doing so?" he asked.
However, Sarah Aol, the school headmistress took responsibility and apologised to the RDC promising to correct the mistakes soon.
"Mr. RDC, I must bring to your attention that I have reported today (Monday) as the new headship and it's just a coincidence but not what I do. As I sit here, this error would soon be handled," she said.
Meanwhile, Rufino Onini, the school management committee boss attributed poor management and the functionality of the school to a decade long foundation body ownership feud between the Catholic and the Anglican factions.
The wrangle according to him has weakened the administration and divided the teaching staff and the parents along the denominational line.
The Ministry of Education and Sports have instructed the district to see that the matter is resolved but for a number of times, the Chief Administrative Officer call for meetings and  nobody turns up only to reschedule to another date.
The school has about 1,200 pupils with merely a candidate obtaining grade one in 2018 Primary Leaving Examination, out of 74 who registered.
The RDC also said he has launched the school cleaning exercise where he will visit a number of schools in the district to enforce the exercise.
The RDC later handed over scrubbing brushes and tins of powder detergent to the school.

The island school struggling with infrastructure

Using latrines is a taboo in Karamoja