Kenyan FA reports Nkata to FIFA over match...
Next Story

Terry's size pushed him into the sport which has now become his passion.

Terry's size pushed him into the sport which has now become his passion.

American powerlifter Terry who is also the American Powerlifting Association coordinator and chairman-New York City has been in the country for over two weeks not only to support the Roy Mubiru Beast Mode Power Lifting Championship but also support the growth of the sport.
The former American soccer players' size pushed him into the sport which has now become his passion. He spoke to Michael Nsubuga before he left for the US.
What has been your impression of the country, weather-wise compared to back home?
I was actually a couple of days late getting into Uganda because at home in New York because we had a foot of snow and was minus 10 degrees so stepping off the plane in Uganda was like stepping in heaven. The people here have been super nice, we have been well received everywhere; everyone has been so polite and helpful. I can't thank everybody enough for the welcome and support and everything we have seen.
You came to support Roy Mubiru, how did you meet; where?
We met a few months ago. We were in a powerlifting competition supporting each other because we don't compete against each other because we are in different classes. We were just urging each other on and helping each other and I saw him holding a flag and I even didn't know his nationality. From then on we just started talking about coaching kids and how we can use sports as a tool to get to the youth and putting them into the mindset of working hard, to get them off drugs and stuff like that and that's how we became friends since we were all bent on developing the sport. 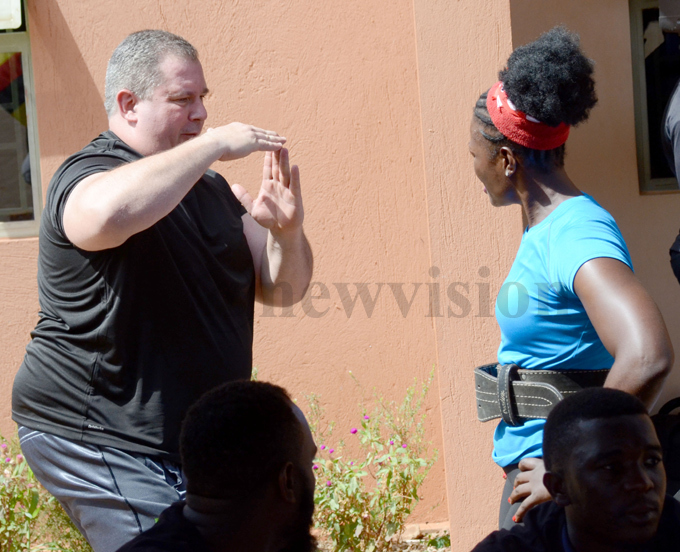 Personally, what do you do in the US?
In the real world, I'm an IT specialist, I do networking, servers, wifi, ip phones, ip cameras. I bring technology like that to schools.
Are you an active powerlifter too?
Yes after my real job, I coach kids in weight lifting, training them in American football. I also train myself to compete. I'm based at my home town in Hanson New York.
Are you going to the World Cup also?
Yes, I also qualified after winning my class level and I will be at the World Cup. Hopefully, I will travel to Boston to meet Roy so that we go together. I compete in the Super Heavy Weight -Masters Division. I'm 54 so I compete in the 50-55 years age group.
What was your impression of the Ugandan powerlifters at the RM championships?
I was thrilled to see that level of competition. I was touched to see the disabled kids competing-that was just amazing.  With that level of competition, some of those lifters need tips, tweaks and professional and nutritional help; I think they can be competitive anywhere in the world, even at the world stage.
Do you think they can compete at the Arnold Classic?
I don't know whether they will be time ahead of the Arnold Classic to improve their technique and stuff, but I can see them doing it but I think they need more time to get all the techniques under the belt, but the Arnold Classic will be a great experience for them.
What does it take to make it to that level?
There are certain God-given things that you cannot control like how your leg joints are put together, how your muscles are connected to your bones etc and then there is also hard work and dedication. So it is really working very hard in the gym.
Is this a paying sport in the US?
At the very elite level; people commit with sponsors, at the normal level I don't make a penny, I only dedicate my time to teach kids out of passion and more of self-satisfaction to promote my country and my family.
What is required to start out as a powerlifter?
Get to a gym that has real weights not just machines and is well equipped and you must have the dedication to work hard. A few local gyms I have visited here have been able to make their own piece of equipment and they are all good as many I have seen in the US. So just find a gym that has the capabilities. What do powerlifters feed on and how often?
Primarily we feed on protein to build our muscles, vegetables for the vitamins and minerals, carbohydrates to give you energy for pre-training. After training, proteins that are quickly absorbed to help muscles recover. So it is six-seven times a day on top of the normal breakfast, lunch, and supper. We also take pre work out and post workout meals but moderately. Protein shakes pre and post shakes do it for me. Sometimes it is like a job
Is your training different from other musclemen like bodybuilders?
Absolutely, powerlifting workouts are different from those of bodybuilders. We are not using 100 reps to pump up our muscles
We use lower reps, higher weights to train our bodies with  that one-body push
Are you planning to return to Uganda?
Next time Roy has a contest hopefully I can get here early and try to help the lifters in coaching and on how to improve their technique. When someone uses a wrong technique and makes a no lift they get very upset. Hopefully, I can get back like a week before competition and get them all together and show them how it is done.