Bishop asks donors not to ask for accounta...
Next Story

The situation at Makerere University remains uncertain as lecturers resolved to continue with their industrial strike action.

This was after the mediation between the Makerere University vice-chancellor Prof. Barnabas Nawangwe and lectures to end the strike hit a snag. The lecturers insist that their association leaders should be reinstated.

The lectures and non-teaching staff have now given Nawangwe an ultimatum of up to Thursday to have the matter resolved if he truly has the will to resolve the prevailing impasse at the campus.

They also want Ruth Iteu to be allowed to represent MASA at the University Council.

Earlier on in the day, before the assembly, the executives and the suspended leaders of the three associations including MUASA, MASA and National Union of Education Institutions (NUEI) had a meeting with Nawangwe at his office, mediated by the University's convocation chairperson, Dr Tanga Odoi. 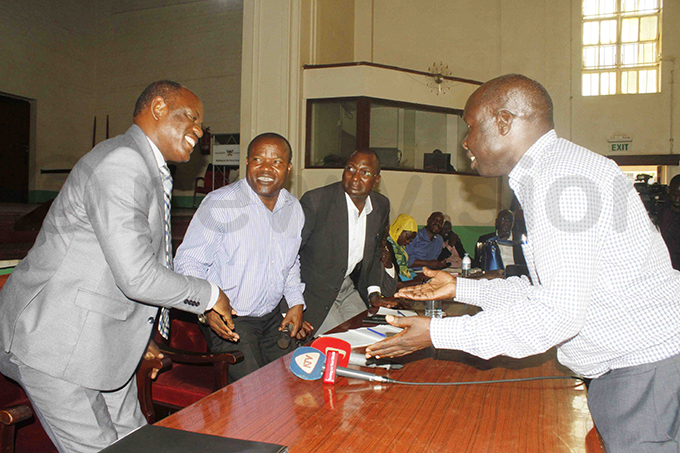 The head of convocation, Dr Tanga Odoi (left), chats with Prof. Nawangwe during the meeting. Photo by Abou Kisige

The MUASA general secretary, Michael Walingwa revealed that during the dialogue, the two parties had agreed to suspend the strike pending engagements with the VC and investigations by the committees, which other members rejected.

Addressing the assembly, Nawangwe said; "We had a good meeting and my word is we are stronger together."

He stressed that during their meeting with the three associations, they agreed to start a new chapter of mutual respect.

"I am happy Kamunyu has also agreed to appear before the investigations committee as our deliberations continue. I came here to affirm that as management, we are ready to begin a new chapter and dialogue towards harmony to lift our university," he noted. He asked lecturers to go back to work pending the engagements.

At the meeting, Odoi also made Nawangwe and Kamunyu hug and shake hands amidst chanting from the members. Odoi said he was happy that Nawangwe had agreed to engage in dialogue.

"I have achieved my goal of reconciling the two. Let us now allow the discussions to continue for the best of this university," he noted.

Kamunyu said he accepted the process of mediation and to appear before the committee to allow students start lectures.

"I also want to reach out and massage the egos of those who think I am wrong. We must fight those who play these games which have led us into this anguish," he noted.

Kamunyu said he stands for equity and good for everyone. "I believe it is the truth that guides me and leads me into anguish. We are in this because we did our work." 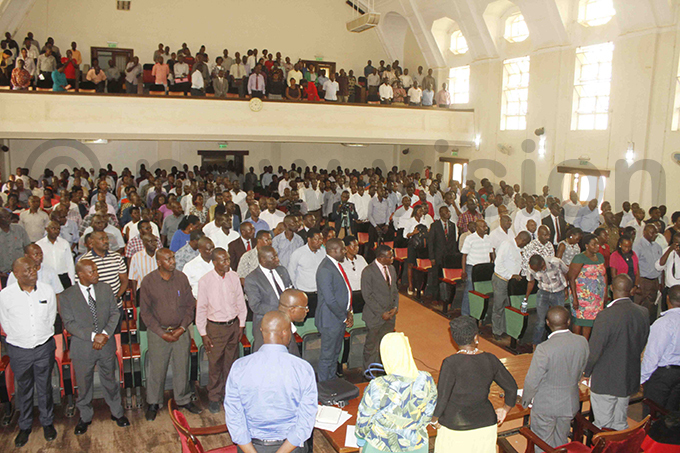 Prof. Jean Barya said no head of department had complained about the conduct of Kamunyu and other suspended associations leaders, wondering how Nawangwe suspended them.

"This is simply a tactic to hit leaders and create fear among other members. We should give them three days to engage as we lay down our tools to reach an agreement," he noted.

Most of the members agreed to Barya's suggestions, stressing that Nawangwe needed to show his willingness towards ending the ongoing impasse.

The MUASA vice chairperson, Dr Nector Mwavu, said for the good of peace, "We are giving three days of engagement with the vice chancellor to have our leaders reinstated. We shall get back here on Thursday to get a report."

Diana Ahumuza from the School of Law, said allowing their associations leaders to return would be gesture that indicates Nawangwe and the university management are willing to engage and find a resolution.

Viola Munyigwa, a non-teaching staff at the university asked management to separate politics from academics, saying it was affecting the innocent students.

Robert Bakuru, another lecturer, said; "you cannot leave an injured combatant in the struggle."

"The VC's gesture is good but it is our cardinal duty to protect our leaders," he added.

Amos Dembe Ashaba, the university internal auditor, however said lecturers need to go back to teaching pending the discussions, stressing that internal disputes were killing the image of the university.