KAMPALA - The ongoing remedial works on the Source of the Nile Bridge is part of a planned procedural maintenance works, Uganda National Roads Authority (UNRA) has said.

The asphalt overlay on the bridge deck is intended to make good defective works by the contractor during the 24 months defects liability period.

UNRA Executive Director Allen Kagina also noted that there were no structural defects on the new bridge but that there was poor bonding between the water proofing material laid to protect the concrete deck and the Asphalt wearing course that was placed on the bridge deck, causing the carriage way to have bumpy ridge.

In a guided tour of the media on Thursday, Kagina who was flanked by the Project Manager Engineer Lawrence Pario, and Morris Odoch who is the resident project engineer said the wearing course seen was a non-structural attachment on the deck to provide a smooth driving surface on the bridge carriage way. 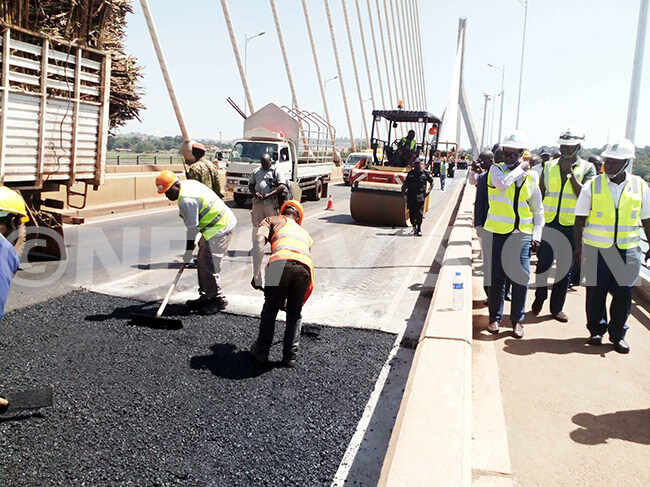 "The structure of the bridge is solid and it will last for its designed period which is 120 years. The non-structural components which is the attachment to the bridge carriage way is what is being replaced right now and that is what the public is asking about," she said.

Pario on the other hand noted that what was going on site were remedial works. "What happened was that we realized that the poor bonding between water proofing layer and asphalt wearing course on the pavement of the road works was causing ruts making the driving surface bumpy. We want the concrete to have 120 year design life and that is why we put a layer of water proof material between the concrete and Asphalt. Later on we realized that the bonding between the water proof material and the asphalt on the input layer was not so good and for that reason we have taken up remedial works to remove the asphalt which is not bonding well with the material," Pario said. 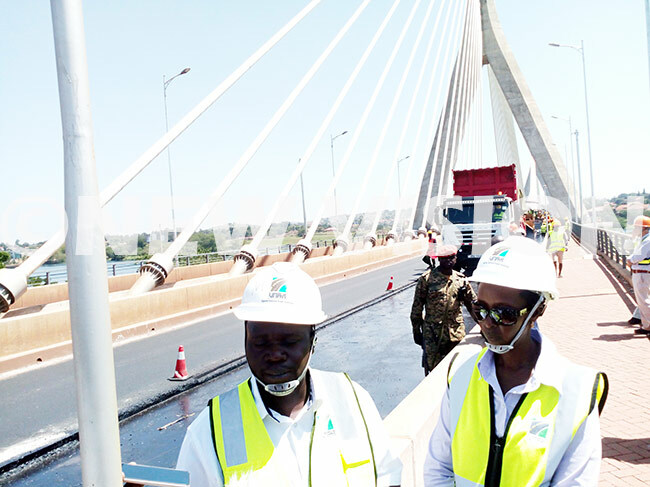 He noted that in October, they would have a more permanent solution because UNRA would have to remove the water proofing material so that the problem is solved. "The issue at hand is functional defect and it will not affect in anyway the operation of the structure, traffic is flowing normally and that it should not cause much worry and concern to the public," Pario said.

Odoch noted that the current defects have been noted on similar bridges worldwide and had undergone the same remedial works shortly after they had opened. He showed the media some of the bridges in Japan on the Nagoya Expressway, Vietnam that had had similar defects and later rectified after identifying the cause.

He attributed the current defects to braking and acceleration of motor vehicles. "It's the normal behaviour between the bridge deck and water proof material when you use Asphalt material," Odoch said.

Odoch disputed media reports that the defects were as a result of hurried works by the contractor in attempt to beat the deadline insisting that they had a work programme that was strictly adhered to.

He noted that this was the first time they were using the water proof material. Odoch also took the media to their bridge health monitoring room and explained that according to the data captured by the bridge structural health monitoring system, the traffic loads passing on the bridge are not exceeding the design load. 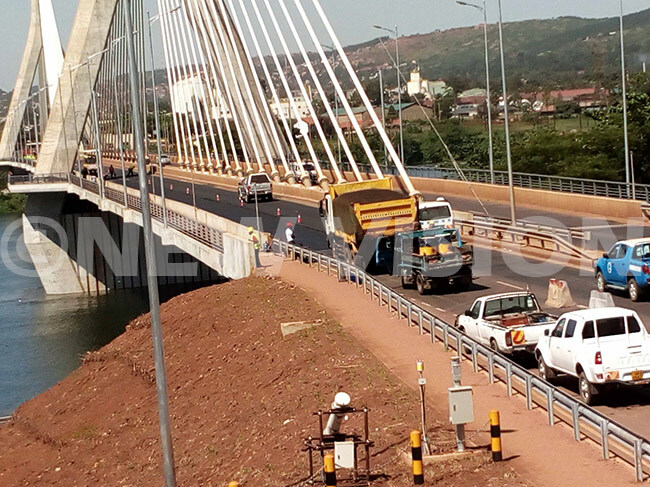 Kagina noted that there was no traffic hold up on the import lane but what had happened was that traffic had slowed down because only one lane was open. "It takes three days to do the work. On the first day we remove the asphalt, second day we lay and on the third day we open," Kagina added.

She appealed to the members of the public to be more responsible while using the bridge. "There was a young man who came here and opened a studio here including printing photos and he left all sorts of debris here, which included paper cuts and bottles. When we asked him to move, he became violent and we had to use the law to remove him. He is endangering people and making the bridge dirty," Kagina said.

She advised that provision was made, where people could park vehicles and take pictures. She urged people to be more careful because traffic travels at high speed on bridge. "We have seen people come to propose to their loved ones on the bridge, others want to take selfies. That is fine, but then do it responsibly. We don't want anybody to lose their lives," Kagina added.

Kagina personally led her team to pick several empty plastic bottles that had been thrown on the bridge and she warned that this was dangerous to the environment.

She noted that they would do beautification of the bridge to enhance tourism and work together with the Uganda Tourism Board.

She also said that they would also install construction process information to be used for educational purposes and tourists so that people would get to learnt how the bridge was built. In this regard, UNRA was setting up a museum to archive information about the bridge.

President welcomes move to field one candidate in Bukoto South

President pays tribute to the late Kaaya, hails his role in bush war