The Acholi hailed for contribution in fight against LRA

Okello Oryem, the Foreign affairs’ minister also noted that many of the locals volunteered as arrow boys to fight against the rebels alongside UPDF soldiers at the time.

Okello Oryem, the Foreign affairs’ minister also noted that many of the locals volunteered as arrow boys to fight against the rebels alongside UPDF soldiers at the time.

KITGUM - The Prime minister of Uganda, Dr. Ruhakana Rugunda and the national army, Uganda People's Defense Force (UPDF) have commended the people of Acholi sub-region for trusting the national army to fight Lord Resistance Army (LRA) rebels without a thought of seeking refuge in other countries.

In an earlier communication on the justification for commemorating Tarehe-Sita in Acholi sub-region, Col. Bahoko Baringye the UPDF Deputy Chief Political Commissioner said despite the war affecting millions of people, their trust in the UPDF was not shaken.

Okello Oryem, the Foreign affairs' minister also noted that many of the locals volunteered as arrow boys to fight against the rebels alongside UPDF soldiers at the time.

"These individuals deserve to be recognized differently. The Commander of the Defense Force should organize for this even if they are just going to take sodas but so long as their efforts are recognized," he added.

The Prime Minister also hailed the Acholi's for the confidence they had for UPDF at the time when the region was in total unrest.

While people saw UPDF as their own army, Dr. Rugunda who was presiding over the regional launch of the Tarehe-Sita commemoration at Kitgum Core PTC on Thursday noted that the biggest challenge at the moment is to ensure that confidence in the national army is enhanced. 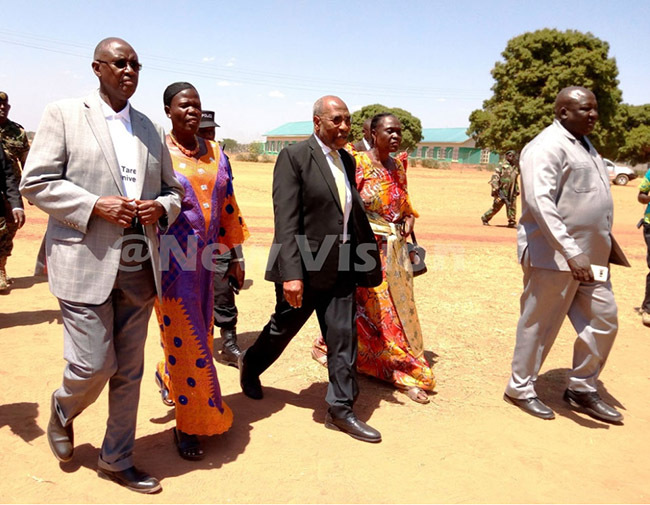 The Prime Minister also said when a group of young men with 27 guns under the NRA took up arms to fight an organized regime it was not an easy task. But because of the clear headed leader and analysis, the impossible task became a reality.

"Acholi has been at the centre stage of all these incidences. At one time a special cabinet meeting was held in Gulu barracks and a decision was made that 23% of all the ministry budgets be cut to facilitate UPDF operations," he reminded the gathering.

However, Beatrice Atim Anywar the Kitgum municipal MP noted with concern that during the LRA insurgency, several individuals in Acholi offered their land for establishment of army detaches and barracks but they've never been recognized.

The legislator also challenged locals to jealously guard the peace so far achieved by informing security personnel of any suspected subversive activities in the region.

Jackson Omona the district chairman brought to the attention of UPDF that while peace has returned, some individuals from Karamoja sub-region and South Sudan continue to cause unrest in the communities living at the border.

The most affected districts are Lamwo, Agago and Kitgum where cattle rustlers have made it a habit to loot cattle from those districts and also kill the owners.

This year's Tarehe-Sita celebrations will be held under the theme: "UPDF and the People: Consolidating Peace for Sustainable Development and Prosperity." A number of projects in health and education are to be undertaken in the eight districts of Acholi sub-region in addition to the 23 free medical out reaches at different health centers.