Court to rule on whether Stella Nyanzi trial should go ahead

Buganda Road Chief Magistrate's Court has set February 15 as the date when a ruling will be made on whether the charges against jailed former Makerere University researcher, Dr Stella Nyanzi is defective as she alleges.

Before her trial kicked off in December last year, Nyanzi through her lawyer, Isaac Ssemakadde raised a primary objection on the charges against her.

She contends that the particulars of the charges against her do not disclose the specific offence she allegedly committed, rendering it defective.

"The charge sheet does not indicate the purpose of the alleged indecent communication or a specific period of time when Nyanzi made the post which is an essential ingredient when it comes to prosecution of internet cases, rendering it defective and incurable," Ssemakadde submitted.

Nyanzi is charged with two counts of cyber harassment and offensive communication in regard to her alleged indecent communication against President Yoweri Museveni and his late mother Esiteeri Kokundeka.

Ssemakadde insists that Nyanzi's trial should be nullified because the charge sheet appears defective.

"If the lawmakers had wanted the suspects to be charged in a very casual manner where the accused's fundamental rights are not considered like in the instant case, they would have easily stated so in the enabling law," Ssemakadde submitted.

However, resident state attorney Janat Kitimbo argued that under the law, the accused is not open to objection to an offence because the charge sheet does not contain all the particulars of the charge.

"The intention of Parliament to come up with section 88(o) of the Magistrate's Court Act (MCA) was meant to avoid the situation where an accused does not want to stand trial when witnesses have been summoned basing on a technicality to defeat justice," Kitimbo submitted. 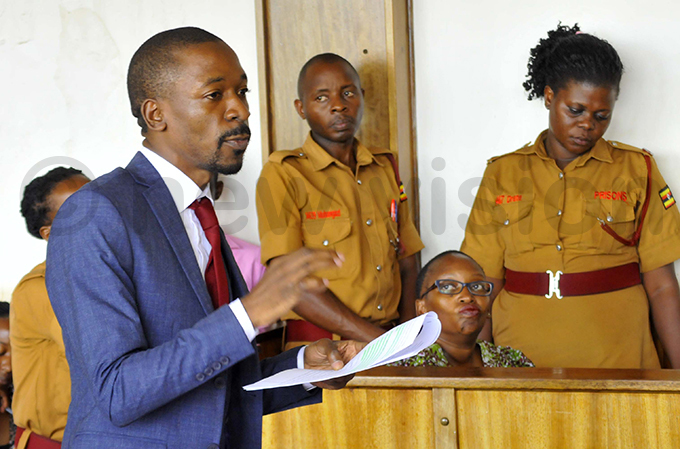 After hearing from both parties on Thursday, Grade One Magistrate Gladys Kamasanyu set February 15 to rule on the matter.

Nyanzi, a mother of three has been on remand since November last year. She also suffered a miscarriage early this month while on remand.

In court on Thursday, Nyanzi did not ask for bail and has been further remanded until February 15.

Prosecution led by Janat Kitimbo alleges that on September 16, 2018, Nyanzi posted indecent words against the president and his late mother on her Facebook wall.

According to the prosecution, the posts were intended to disturb their peace, quiet and right to privacy.

In regard to cyber harassment, a person who wilfully, maliciously and repeatedly uses electronic communication to harass another person and makes a threat with the intent to place that person in reasonable fear for his or her safety or to a member of that person's immediate family commits the crime of cyberstalking and is liable to a fine or imprisonment term not exceeding five years or both.