Around 300 missing, many feared dead in Br...
Next Story

The pope warnd of the "weariness of hope that comes from seeing a Church wounded by sin, which has so often failed to hear all those cries".

The pope warnd of the "weariness of hope that comes from seeing a Church wounded by sin, which has so often failed to hear all those cries".

Pope Francis winds up a global gathering of young Catholics on Sunday with a giant open-air mass for hundreds of thousands of pilgrims before leaving Panama.

The pope, who on Saturday admitted the Church had been "wounded" by a deepening clergy sex abuse crisis, will celebrate the second open-air mass of his visit at a park on the outskirts of Panama City.

After mass, scheduled for early in the morning to avoid high temperatures, the 82-year-old pope will meet young people living with AIDS and HIV at the Good Samaritan home in the city.

Francis will thank hundreds of World Youth Day volunteers at a stadium in the afternoon before a farewell ceremony and a flight back to Rome.

The pope acknowledged Saturday that the Church was "wounded by sin" in a homily addressed to priests and seminarians reeling from sexual abuse scandals and coverups.

Celebrating mass at the landmark Cathedral of Santa Maria La Antigua in Panama City, Francis warned of the "weariness of hope that comes from seeing a Church wounded by sin, which has so often failed to hear all those cries." 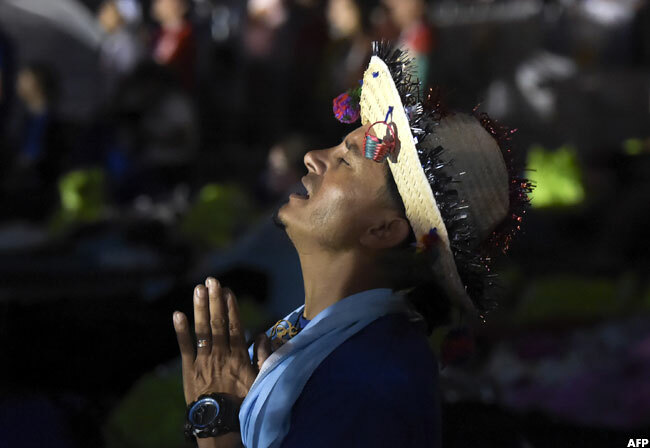 At a lunch meeting with 10 young pilgrims, Francis said sex abuse by the clergy was "a horrible crime," according to one of the guests.

Later, at a massive vigil that the organizers said drew 600,000 pilgrims, the pope called on young people to reject the temptation to live their lives online and urged them to get involved in their communities.

Life was not "in the cloud, waiting to be downloaded, a new app to be discovered, or a technique of mental self-improvement," the pontiff said during his grandfatherly discourse.

The Argentine pope has used his encounter with young people in Central America to speak out repeatedly in defense of migrants, and address other problems affecting the region such as poverty, drug trafficking, violence and what he said was a regional "plague" of murders of women.

In a swipe at US President Donald Trump's plans to build a border wall against migrants, the pope said at a giant prayer meeting on Saturday that it was "senseless" to condemn every immigrant "as a threat to society."

During that mass Francis consecrated a new altar at the restored basilica, rubbing it down with holy oil and blessing it in a solemn ceremony.

Installed in the altar were the relics of three Latin American saints, including Oscar Romero -- the San Salvador archbishop murdered while giving mass by a far-right hit squad in El Salvador in 1980 -- who was made a saint by Francis last year.