Rose Nakimuli's body was discovered in a banana plantation

Ivan Katongole in court during the hearing. Photo by Wilfred Sanya

Rose Nakimuli's body was discovered in a banana plantation

James Maiko, a Police officer, told court during cross-examination he was informed that Rose Nakimuli was in the company of her alleged killers before she was murdered in cold blood.

The suspected murderers include businessman Ivan Katongole alias Jenus, a fish dealer at Kasenyi landing site, Andrew Kizito, and Hellen Nabaggala, the sister of the deceased.

Prosecution alleges that the accused on July 23, 2017, killed Nakimuli, a hair-dresser, in Kitala village, Katabi Town Council in Wakiso district. Her body was discovered the following day in a banana plantation.

Testifying before High Court judge Wilson Kwesiga, Maiko who is attached to Entebbe Police Station, said he was informed by Daniel Ntume, a resident of Kitala in Entebbe, that Nakimuli was in the company of the accused, having a drink at Jantos Bar before she was killed.

"I was told by Ntume that after Nakimuli left the bar on the night of July 23, 2017 at about 2:00am, Katongole followed her and later returned to the bar," he revealed to court.

Maiko said after gathering information, he reported to the officer in charge of Criminal Intelligence and Investigations Directorate at Entebbe Police Station, who instructed him to arrest Katongole.

This, he said, prompted him to arrested Katongole and recovered two phones which contained images of bodies of women but none of them were Nakimuli. "There are so many women who died in Entebbe."

Maiko was giving his testimony under the guidance of prosecutor Bartson Baguma.

During cross-examination by Caleb Alaka and Evans Ochieng, Maiko confirmed to court that he did not record a statement from Ntume. 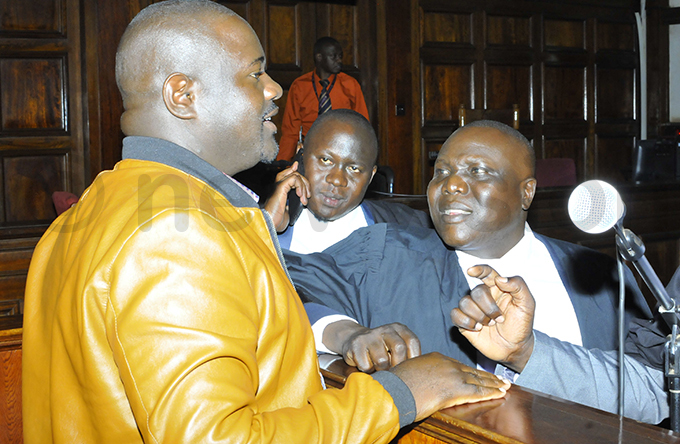 Amina Barungi, a Police officer attached to Police's headquarters in Naguru, told court that on July 25, 2017, Ntume's blood samples were taken and submitted to the government analytical laboratory to assist in investigations.

She however revealed that the DNA results turned out negative, thereby failing to establish a link between Ntume and Nakimuli's murder.

Barungi also told court that Katongole's phones and SIM cards were submitted to Police's forensic department for imaging but there was no direct link to the items recovered from the accused and the samples obtained from the scene of crime.

"The information is scanty and we do not have evidence linking the suspects to the murder of Nakimuli," stated Barungi in her statement read to court by lawyer Ochieng.

Police constable Joseph Ediandue, 33, who took pictures of the scene of crime, told court that evidence indicated that Nakimuli was dragged from the gate to her home, to the banana plantation, where she was killed.

"She sustained injuries on her mouth and her private parts were bleeding," he revealed.

Ediandue told court he collected sand, leaves, and recovered a jacket stained with blood at the scene of crime. The exhibits were taken to Mulago laboratory and the deceased's body to the City Mortuary for further examination.

Ediandue also said he searched Katongole's building which was still under construction and his residence in Kasenyi but did not recover any item linking him to the murder.

During cross-examination by Ochieng, he revealed that many people participated in the strangling of Nakimuli.

Zakaria Mbabazi a witness said he was informed by the relatives of Nakimuli that she didn't get along with Nabaggala even though they stayed in the same environment.

"I was told by the parents of the deceased that Nabaggala jubilated when their daughter (Nakimuli) died," he said.

I am sick, tired of begging meetings

Wedding- Would you take a loan?