Jeremiah Mukisa trembles in his red t-shirt as a doctor fixes a blood transfusion tube into his tiny left hand at the Mulago hospital Paediatrics Acute Care Unit. It takes him the whole day to complete a unit of blood. Like many others around the country, the nine year old who suffers from sickle cell anaemia, needs fresh blood to stay alive.

"Several sicklers need constant blood transfusions. We also have cancer patients who need platelets and plasma. There are people in surgery, patients in the Women's hospital and others who have had motor accidents who also need units of blood," Dr. Birabwa-Male said.

As a result of the high need for blood transfusions, the NSSF has partnered with the Uganda Blood Transfusion Services (UBTS) under the Ministry of Health and the Uganda Red Cross Society.

Now in its ninth year, Richard Byarugaba, the NSSF managing director pointed out that the target for this year's annual blood donation drive is to secure 6,000 units of blood to the National Blood Bank up from the 4,500 units raised in the weeklong campaign last year.

"We are passionate about the communities we serve and believe a healthy community is critical for the fulfilment of our mandate. A potential blood shortage affects everyone indiscriminately regardless of stature and standing in society," Byarugaba said. 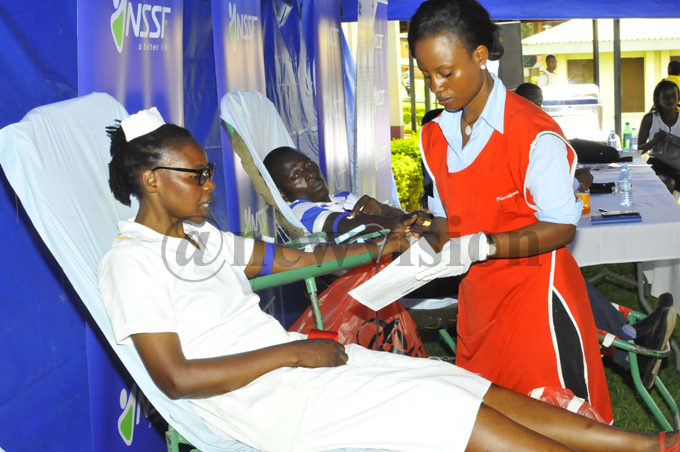 Under the theme "Stand Up for Life", the donation drive will take place at the Constitutional Square in Kampala, Workers House, Clock Tower, Mukwano Arcade and Owino Market, Kalerwe, Bwaise, Mukono, and Entebbe.

Out of this demand, Dr. Byabazaire said that UBTS are only able to collect under 800 units due to various challenges that range from access to funding and other logistics.

"Many of our international partners are cutting back their support which has left the National Blood Bank with challenges. We therefore have to start looking within the country for partners," she said.

"We appreciate organisations such as NSSF that have come in to fill this void. We hope other organisations and individuals can emulate this gesture," Dr Byabazaire added, pointing out that to qualify as a blood donor, someone has to be above the age of 17 years, weigh more than 45 kilograms and be in good health.

She pointed out that donated blood only lasts for 35 days while the platelets from blood last only 5 days which implies that the blood bank must replenish its stock very frequently.

Robert Kwesiga, the Secretary General Uganda Red Cross Society urged Ugandans who are not regular blood donors to consider doing so in order to solve scarcity of blood for transfusions.

Over 40,000 scientific publications free for Ugandans

Patent application in Uganda in relation to mobile and computer applications