New cases have been recorded in Bukoto and Kireka

New cases have been recorded in Bukoto and Kireka

Two cases of cholera have been reported in Bukoto and Kireka and the victims are currently admitted at Naguru Hospital isolation ward.

Ever since the onset of Cholera outbreak in Kabowa Parish, more than 16 patients have so far been admitted at Naguru Hospital.

He said last week they received one cholera suspect from Namboole in Wakiso district, who later tested negative. He added that they are yet to get more medical supplies for cholera suspects from National Medical Stores.

Meanwhile, Kampala Capital City Authority (KCCA) has banned vending of cooked food, fruits and cold juices in all divisions of Kampala as a way to curb the spread of cholera in the city.

The KCCA health inspector, Dr Emilian Ahimbisibwe, said in an interview that they will crackdown on all those who do not follow the food vending regulations.

According to the regulations, anybody who sells food in the city must have undergone a medical check-up by KCCA and is issued a licence to vend cooked food.

"Only persons working in restaurants and hotels are entitled to selling food stuffs since they have the requirement from KCCA," Ahimbisibwe added.

He revealed that KCCA health inspectors are continuing with the sensitisation exercise in all the divisions of Kampala to avoid any further out breaks.

Meanwhile the hospital is facing a problem of low volume of water supply. At the moment water is only accessed at the 1st floor. 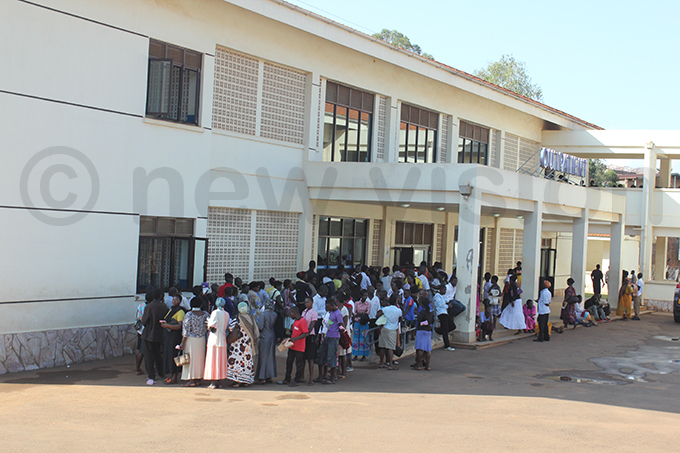 The victims are currently receiving treatment at Naguru Hospital.

Batiibwe said they are picking water by use of jerrycans to the 2nd floor.

"We still have low volumes of water  but National Water and Sewage Cooperation has been promising us that they are trying to restore the rightful volumes of water for this institution," he said.

Cholera is a serious acute infectious disease characterised by watery diarrhoea and vomiting and kills a person within hours. It is spread through eating and drinking food contaminated with faecal matter of an infected person.

Other factors responsible for the spread of cholera include poor personal hygiene such as not washing hands after using the toilet, using contaminated water, poor sanitation as it occurs in open defection and eating food or drinks prepared under unhygienic conditions.

How to prevent Cholera

Access to clean water and use of latrines at community level; hand washing with water soap and other protective hygiene practices, good infection control in treatment facilities is essential to prevent spread of infection.

We gave the peace talks our best

Kony end is in the pipeline