Home
NEWS
Media
Supplements
Tenders
Notices
According to the guide, the Bachwezi from the great Batembuzi dynasty lived here between the 13th and 19th century. These people possessed supernatural powers. They never died, but instead disappeared mysteriously.

According to the guide, the Bachwezi from the great Batembuzi dynasty lived here between the 13th and 19th century. These people possessed supernatural powers. They never died, but instead disappeared mysteriously.

Growing up almost every social studies book had this miraculous myth of Amabere ga Nyinamwiru (Breasts of Nyinamwiru), which almost sounded like a very meticulously scripted movie that anyone would want to watch.

It didn't make sense at all, well, until I grew older and started understanding some geography and giving a benefit of the doubt about pretty much everything.

These breasts are real and I don't blame any Mutooro for believing these features are actually Nyinamwiru's breasts. This is a story that you will definitely enjoy. 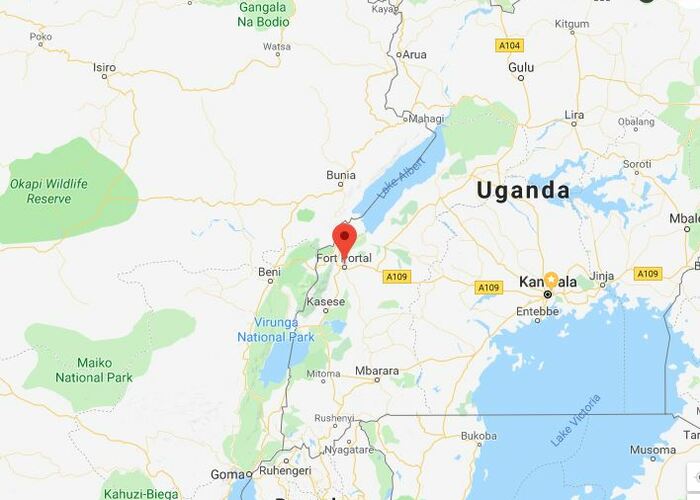 It's 10:32 am and I am in Fort Portal enjoying the ever capricious weather of the Rwenzori ranges and everything is set for me to leave my hotel room and go conquer not only the famous boobs but also the crater lakes everybody who goes to Kabarole District talks about.

Off I hop on a boda boda and I am charged sh3,000 to the Amabere ga Nyinamwiru caves and campsite. At 11:48am on the dot, I register in the visitors' book at the reception and then pay the cover fee of sh7,500. 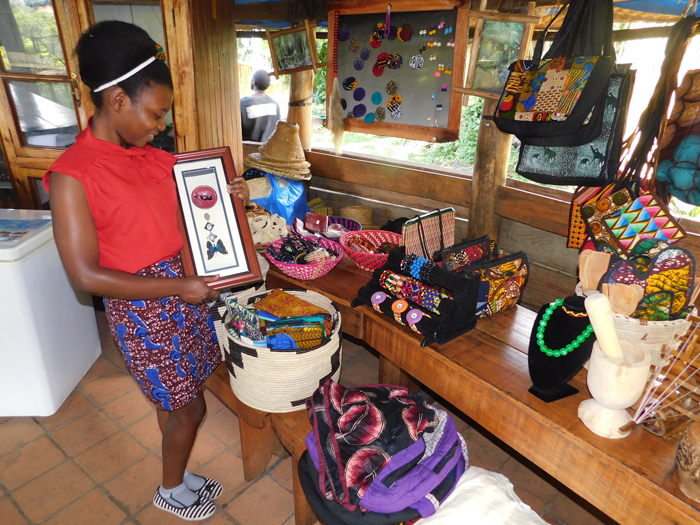 A lady shows crafts you could buy

This fee is to show you around the caves and show you the way to the craters unless you want to pay an enticing tip to the tour guide. Of course I wasn't ready to part with even sh100 for a walk I could do myself.

At exactly 10:57am on a chilly Monday morning, my tour guide who I later learn is called Latif Muhumuza leads the way to the caves.

First, we walk by the camp site where all tourist tents are erected and the fire lit. Nothing much to write home about here really, so we head straight for the caves. It has been raining so bad in Fort Portal that the narrow path is almost impenetrable, but thanks to my sports shoes and my walking stick we maneuver all the way to the Nyakasura waterfall, which is about 5-6 metres high. 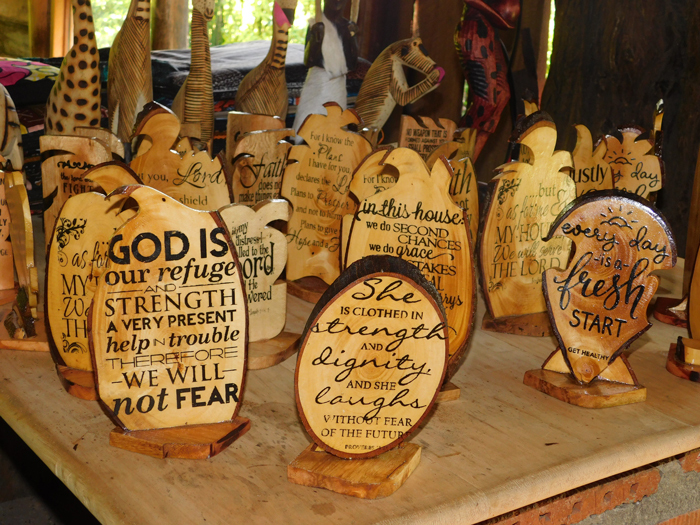 The mementos you could pick from the place

The water comes from the swamp near the crater lakes and since the water is a bit too much we cannot enter the caves full of stalactites and stalagmites just next to the waterfall. So my money starts hurting a little but I keep the faith waiting for Nyinamwiru's breasts.

Not much to see here as well since I have honestly seen stronger waterfalls in my lifetime. Two or three minutes just gawking at the water and the caves I can't get into we change direction to where we were coming from and voila! The famous breasts.

I was in awe for a moment, but had to focus and tell this story to my inner little boy. How did God create some features? It's very unfathomable how these nipple- like structures just gawk at you with so much elegance and flamboyance at the same time.

And they ooze of a milky substance too. I swear; it is a spectacular look this one. I took a couple pictures for a moment, which I later struggled with to get the best shot of the same thing.

Forget that it is just a small area, but just the way these structures look will easily convince you that indeed there is a spiritual connection and the Batooro are not wrong to say that the milky substance oozing out of them is the real milk Ndahura (son of Nyinamwiru) fed on.

According to Latif Muhumuza, the guide, it is believed that the Bachwezi from the great Batembuzi dynasty lived here between the 13th and 19th century. These people possessed supernatural powers. They never died a natural death, but instead disappeared mysteriously. 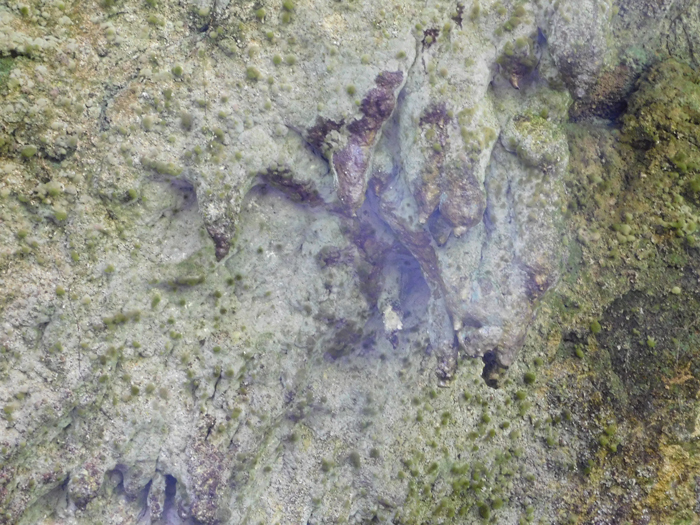 During these times, there were two great kingdoms one in the underground led by King Isaaza and the other on earth led by King Nyamiyonga.

The underground kingdom had a very strong and famous gatekeeper named Bukuku who came to earth to visit his good friend Nyamiyonga, king of the ground kingdom.

When Bukuku got to the ground, he found Nyamiyonga had himself gone to visit another friend in a faraway land. Unfortunately, Nyamiyonga never returned so Bukuku being famous and strong and the closest ally of Nyamiyonga, he took over the kingship of the ground kingdom. 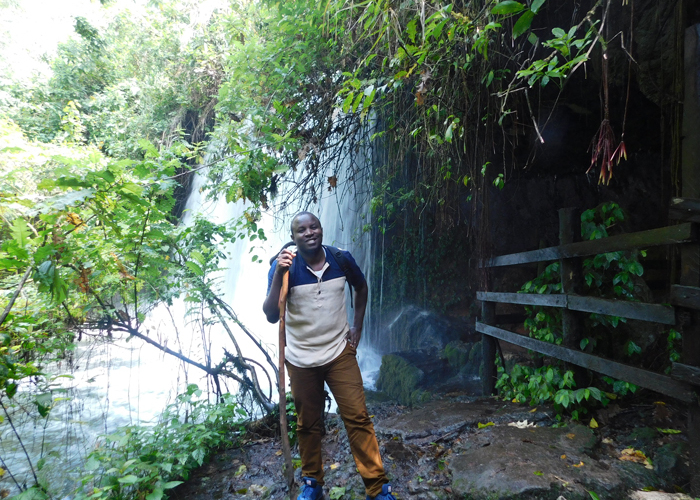 Bukuku as the king of the Chwezi ground kingdom, he had a very beautiful daughter called Nyinamwiru who was secretly in love with a servant called Isimbwa. Bukuku had so many servants, including many foretellers who told him that his daughter (Nyinamwiru) would have a baby boy who would later kill him (Bukuku) and take over the Chwezi kingdom. 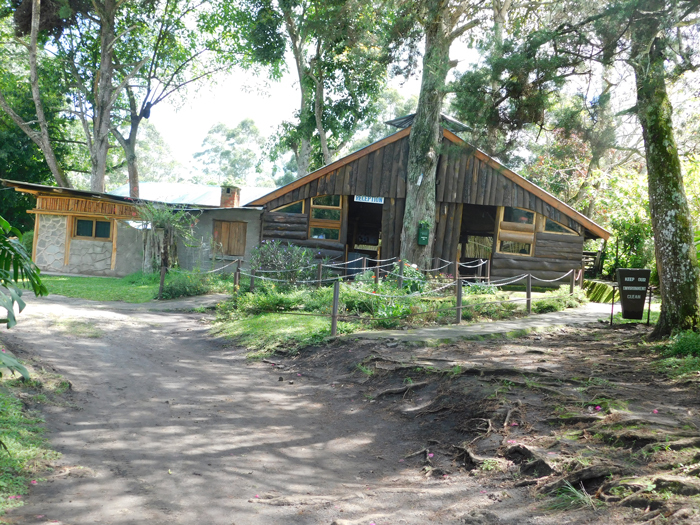 The reception to the campsite

When he heard this, he was so scared and tried out all sorts of ways to block Nyinamwiru from getting married. He built a strong palace and put her under tight security so she couldn't go anywhere outside the palace. Little did he know that a one Isimbwa, a servant within the palace was already sleeping with his daughter.

She got pregnant. When Bukuku found out, he decided to kill her, but his advisors told him not to so he plucked out one of her eyes to make her ugly and cut off one of her breasts, which he threw in the caves. This is how the Amabere ga Nyinamwiru myth comes about.

Rubumbi, the famous potter came across a wailing child as he looked for clay to make his pots and decided to take it home and raise it. This child was Ndahura. He grew up into a strong herdsman since Rubumbi had so many cows.

His herd would mix with the king's herd and they would fight, which would anger Ndahura and he would beat the king's cows mercilessly. One day, Ndahura beat Bukuku's most loved cow called Bihogo and injured it. 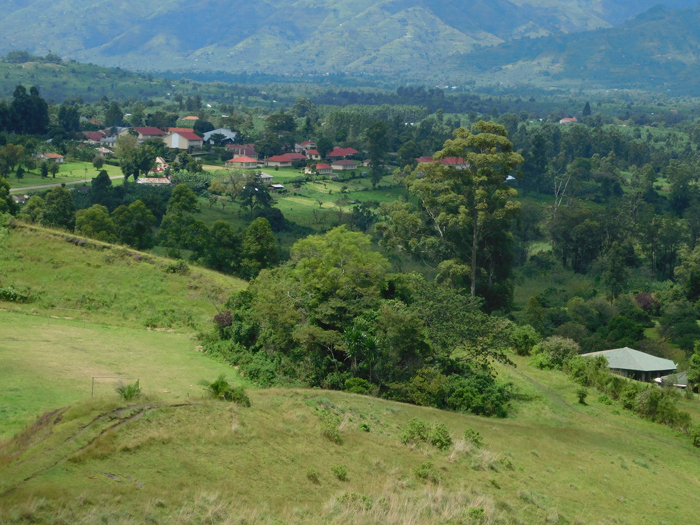 The beautiful scenery of Nyakasura hill

Bukuku was so angry that he chose to go and fight Ndahura himself (not knowing Ndahura was his grandson) even when he was very old and frail. He threw a spear, but Ndahura dodged it and ran towards it, picked it and speared his grandfather (Bukuku) and killed him. The prophecy came true when Ndahura became the new king of the Bachwezi.

Besides the breasts, campsite and waterfall, there are three crater lakes in the neighbourhood which are part of the 52 crater lakes within Kabarole district alone. They are such a spectacle themselves. 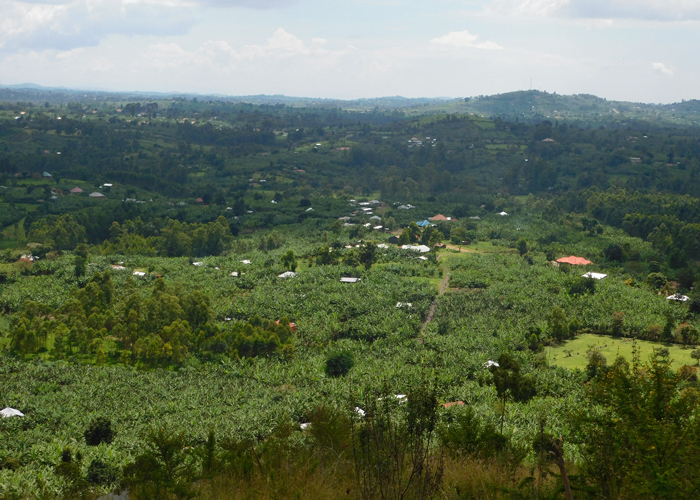 Fort Portal is endowed with fertile soils and a good climate