The House passed two measures that would re-open government agencies whose funding had lapsed, but provide no money for a border wall demanded by Donald Trump

Speaker of the House of Representatives Nancy Pelosi (D-NY) speaks with reporters outside the House Chamber on Capitol Hill in Washington, DC on January 3, 2019. (Photo/AFP)

The House passed two measures that would re-open government agencies whose funding had lapsed, but provide no money for a border wall demanded by Donald Trump

US Democrats swept back to power Thursday in the House of Representatives with veteran Nancy Pelosi at the helm, but they came face to face with what may be a new divided government normal in Washington: legislative gridlock.

After a historic opening session of the 116th Congress in which Pelosi was elected as speaker for the second time in her storied career, lawmakers took aim at a bipartisan priority of ending an embarrassing partial government shutdown that was stretching into its 13th day.

The House passed two measures that would re-open government agencies whose funding had lapsed, but provide no money for a border wall demanded by Donald Trump. They are all but dead on arrival in the Senate, where the Republican leadership has vowed not to bring them up for a vote because they do not pass muster with the president.

Trump has demanded that Congress approve $5.6 billion for construction of a wall on the southern US border with Mexico an oft repeated pledge from his 2016 presidential campaign.

The bills that passed the House contain no wall funding.

"We're not doing a wall," Pelosi told reporters shortly before the votes largely along party lines.

"A wall is an immorality between countries.  It's an old way of thinking, it isn't cost effective," she said, arguing that money would be better spent on border security technology such as drones and cameras, and on hiring more border agents.

Republican leaders immediately blasted the vote as a pointless political gimmick that would do little to provide the resources necessary to secure the border, and said Democrats were not negotiating in good faith.

"The president made it clear, we're here to make a deal," Vice President Mike Pence told Fox News late Thursday. "We will have no deal without a wall."

Democratic congressional leaders said they will head to the White House Friday at 11:30 am (1430 GMT) in a bid to break the impasse, but lawmakers have warned the shutdown could extend for several more days, even weeks. 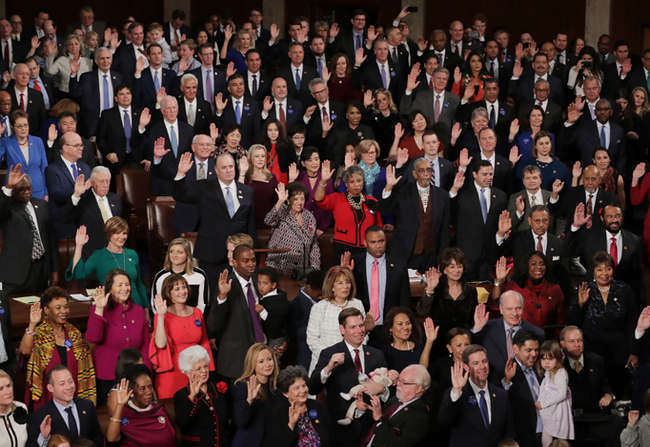 Speaker of the House Nancy Pelosi (D-CA) swears in House members during the first session of the 116th Congress.(Photo/ AFP)

Democrats' new majority in the House of Representatives marked a dramatic power shift on Capitol Hill less than two years before the Republican president's re-election bid, as Democrats intend to put a check on Trump's turbulent White House.

Several lawmakers cheered and applauded at length when Pelosi reclaimed the speaker's gavel a striking comeback for the only woman ever to hold the post.

In her opening speech, Pelosi vowed the new Congress would be "bipartisan and unifying" but acknowledged the reality of Washington's bitter divisions.

"We have no illusions that our work will be easy, that all of us in this chamber will always agree," she said.

"But let each of us pledge that when we disagree, we will respect each other and we will respect the truth," she added, in a likely dig at the president's aggressive style and his propensity to embellish facts.

While the "blue wave" swept dozens of House Republicans out of Congress last November, Trump's Republicans managed to modestly expand its majority in the Senate, meaning Washington gridlock is almost certain to deepen.

Senate Majority Leader Mitch McConnell said Democrats would have to "get serious about border security so that a government funding agreement may be reached that can pass the House, earn 60 votes here in the Senate, and receive a presidential signature." 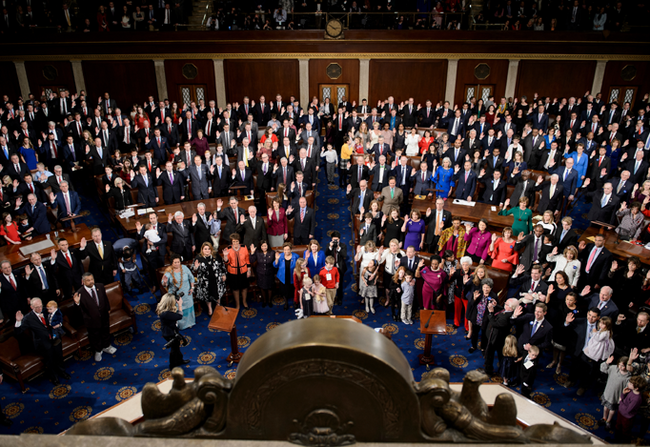 Members are sworn in in the House of Representatives during the opening session of the 116th Congress.(Photo/ AFP)

Top House Republican Kevin McCarthy said divided government was "no excuse for gridlock or inaction," before handing the gavel to Pelosi, who was elected with 220 votes in a free-wheeling session that included children scampering in the chamber.

Pelosi will preside over the most diverse Congress in history.

One hundred House freshmen took the oath of office, including trailblazers like New York's Alexandria Ocasio-Cortez, who at 29 is the youngest woman ever elected to Congress.

"It's a new day in America," tweeted Ilhan Omar, a former Somali refugee elected from Minnesota.

Progressives will be eager to push back with greater effect against an administration they believe has overstepped its authority.

They will have that opportunity, as congressional panels now led by Democrats are expected to unleash a barrage of investigations on everything from Trump's income taxes to his ties with Russian leader Vladimir Putin.

And hovering in the background in Washington will be the threat of impeachment.

While it is almost certain that some Democrats will introduce proceedings to remove Trump from office, Pelosi has downplayed the idea.

"It would be very divisive," she told Elle magazine. "It's not something that I'm stirring the pot on."

Trump impeached for abuse of power

Trump warns US government shutdown could last a 'long time'

Trump and Ukraine: A chronology from phone call to impeachment