"How can I give them my land for free?"

Works have stalled as land owners hold firm on their demand for compensation. Photo by Job Nantakiika

"How can I give them my land for free?"

Residents of Nansana West in Nansana Municipality, Wakiso district, have demanded for compensation before the municipality authorities expand a road that runs through the area.

The residents made the demands in a consultative meeting held in Nansana west zone in which municipality authorities exchanged ideas with the owners of the land through which the road is proposed to pass.

One of the residents identified as Frank Magala said that they cannot just give away their land for the road project without compensation.

Magala claimed that by the time he bought his piece land on which Nansana Inn was built, Little Muhejji-Kabulengwa Road was a small route and that residents had already offered part of their land for its expansion to the current size.

"I pay busuulu (ground rent) to the Buganda Land Board for my land and Nansana Municipality does not help me to meet this cost. How can I give them my land for free?" asked Magala. 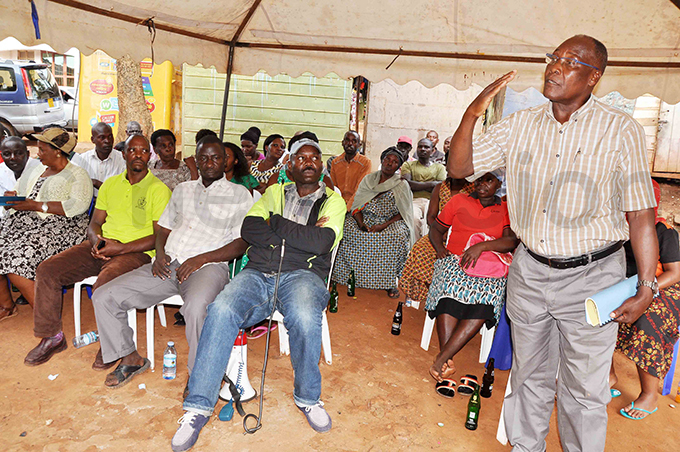 Frank Magala one of the land owners speaks during the meeting. Photo by Job Nantakiika

Another resident identified as Patrick Kato stated that since he owns the land, then the municipality should compensate him fully.

These claims painted a picture of a frustrated project and that it'll be an uphill task for the municipality authorities to convince the residents.

Nansana Municipality engineer Wilber Mukasa informed the residents that it was their choice to welcome the project and give part of their land to for the road or it will be taken to another area of the municipality. "We do not want to force on you something you do not want. Government would force you if there was compensation but the project has come to your area and now it is upon you to make a decision," said Mukasa.

According to Mukasa, the project is to affect over 50 people but said that no house was going to be demolished.

The Nansana Municipality Mayor, Regina Bakitte, appealed to the residents to embrace the project, saying that such roads have been worked on in other areas of Nabweru and Busukuma.

Bakitte told the residents that Government only gives them money for making roads but not for compensation.